We review In Too Deep, a thematic set collection and push your luck game published by Burnt Island Games. In In Too Deep, players are controlling criminals in a cyberpunk-style universe. 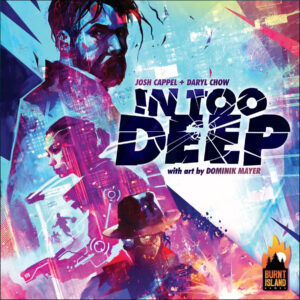 One of the hardest things in board game design is crafting different mechanical elements that allow for players to feel what a theme is trying to deliver. Many players enjoy “Euro” elements that originate from European designers focused less on outright victory and leaning more on points as a yardstick for players to measure themselves.

A few games also use a secondary mechanism to provide tension for players to worry about. In Lords of Waterdeep’s Scoundrels of Skullport expansion, players can gain corruption by taking very expedient actions but will lose points for corruption at game end. This push/pull weight of options provides an incredibly engaging and more advanced style of play.

Taking cues from this and other games, designers Josh Cappel and Daryl Chow have dreamed up a cyberpunk world where electronically enhanced malefactors move through a city of (thematic) perpetual night, committing crimes in the name of the overarching villainous Syndicate. Here enter the players. With the ability to jack-in (remotely connect) to the criminal minds and take control, the player-agents will move criminals and use the zones of the city all towards completing crimes and gathering intelligence on the Syndicate. As the ultimate undercover work, the players will need to be sure their time in their criminal hosts doesn’t push them over the moral edge, resulting in their fall.

This seemingly chaotic affair is for up to 4 players and will easily last 90 – 120 minutes. However, for the best first experience, 2 or 3 players is best to get the rhythm of the game down before bringing in more players. This is essential for this title since there are many mechanisms to track and four possible endings to the game.

Players will need to become familiar with some of the core mechanisms for remotely operating the criminals to commit crimes. Each player’s board has a track of the “grip” (degree of control) they have over each criminal. By taking actions with controlled criminals, the players will need to complete the requirements of various story crimes (main narrative missions) and side crimes (bonus generating missions). These requirements are usually straightforward such as have a criminal in a certain zone, make sure a certain item is held, have a criminal or not in an adjacent zone, make sure an item of a certain type is present, and so on.

On a turn, a player first selects a criminal they wish to take control of. Then they gain grip with any criminals they are actively controlling (up to 3). With this selection of criminals, represented by standees on an octagonal modular board, the player may take up to 2 actions. The actions are:

• Move – Move a criminal to an adjacent zone
• Pick up an Item (tokens representing criminal-esque objects)
• Use a Zone power – Each zone has special abilities which can be activated.
• Use a Criminal Skill – Each criminal has a special ability, some must be activated as an action.
• Gain 1 Grip – Gain grip over any actively controlled criminal.

With these actions, players will have at a minimum 2 crime mission cards which they can complete. Story crimes are major crimes that advance the plot and give more victory points (Intel) while side crimes usually advance the plot at a slower pace but offer bonuses from Boost tokens which are often free actions. Given the limit of 2 actions a turn, these can be very useful. Also, if a player’s grip with a criminal is high enough, they can spend their grip to take extra actions with that criminal. This is sometimes very necessary to complete some of the more complex crimes in a short amount of time.

A part of completing crimes is to gain and then (possibly) file evidence tokens. These represent various aspects of proof required to take down the Syndicate. When a player files evidence, they can either help complete the current chapter’s requirements (face up), file the evidence for the endgame in their locker (face down), or keep the evidence in their memory (face down physically on their board). The implications of each destination depends on what the player is hoping to achieve. If they want to be sure the Syndicate is foiled, they would keep the evidence in their locker. If they’re looking for quick points, they can send tokens to the chapter requirements. However, if the player is sure the Syndicate will be foiled, they may choose to keep evidence in their memory for scoring during the endgame.

Another aspect of the game is corruption. This is represented by values on dilemma cards. These score points at game end through a couple of set collection rules, but their corruption values can mark a player as too corrupt and not be worthy of winning.

A crucial part of the game which MUST be explained fully to all players is how the endgame is resolved. The following steps are resolved:

1 – Players gain points from the grip value of their lowest grip criminal.
2 – Players total their corruption from dilemma cards. The player with the lowest corruption gets bonus points for each player higher than them.
3 – If the final plot was foiled (based on a collected set of evidence tokens), the most corrupt player loses points based on their corruption. If the final plot was NOT foiled then no points are lost by the most corrupt player.
4 – Players score for the evidence tokens they still hold in memory based on the type of tokens used to foil the plot and from icons on dilemma cards.

There are four ways the endgame can resolve, each with a brief narrative explaining how it works. Not to spoil anything, but some of these endings are bittersweet.

As can easily be read from the Gameplay Overview, In Too Deep has a lot of options. This is the main reason why this reviewer recommends a trial play before bringing on a whole gang with a teach. The mechanisms available to each player and how they need to chain them to complete crimes is critical to doing well. This also happens to be what is most enjoyable about the Amazon.com-sized catalog of options for each player on their turn. There is never a single moment that players won’t have pressure or feel tension (in a good way) to complete crimes or make it difficult for others to do the same. All the while, players are desperate to know how close they are to foiling the Syndicate or even just completing the crimes they’re currently working on.

While the gameplay is great and engaging, it’s also the style and thematic elements that bring everything together here. Cappel and Chow have perfectly aligned all the elements, and as hard as it is to feel the theme in any game, this is pretty close to exact. The criminals are chess pieces on a board with seemingly random forces moving everything. If readers are exceptionally frustrated when they get blocked in Ticket to Ride or Catan, this is a game to avoid. A carefully placed criminal will be moved to a new city zone. A tactically placed item will be shifted. And it could even happen that a planned action in a city zone gets canceled when the heat comes in. These frustrations happen more with more players, so it’s a very risky affair to play with the full player count, even as intriguing as it is.

There are a couple of snags in the fabric here, but they’re minor and easily overlooked. The production quality is a bit spartan, but given the subject, it’s amazing how much it doesn’t matter. Miniatures, although they could serve to make some of the criminals have more presence, are not missed. The mnemonic use of art and coloring of each criminal personality helps the mental hoops needed to complete crimes. The player boards seem dark and the city tiles have little flair, but the multiple configurations to the city and the contrast from the player boards to the tokens placed on them is just right.

Finally, what may be the standout element for how the entire experience evolves is the end game resolution. While it could have just been stated as victory or defeat in the rules, the designers carefully thought out the thematic meaning to each of the four possible game endings and crafted a story for each. This is artistic game design at its finest. In the end, the players can really feel the thematic weight of the story they just participated in. It becomes more than a game and allows everything to become more of a roleplaying experience sharable in future game night reminiscence.

A near perfect marriage of theme and mechanisms, In Too Deep hits hard when it comes to delivering a tension-filled game night. The changing game state is a factor in liking or disliking the game, but this reviewer sees it as one of the best features to challenge players. Even though players committing crimes is boiled down to moving standees and tokens around a rondel, it produces a feeling of great accomplishment to resolve crime cards and gather that precious intel (victory points). While some players may at first scoff at the basic components, the gameplay should win them over and deliver an endgame narrative experience that’s rare in gaming these days.

Final Score: 4.5 stars – A near perfect blend of criminal options feeding those who crave the most complex of tactical choices.

Misses:
• Not recommended for gamers frustrated with changing board states