We review Imagineers, a theme park game published by Maple Games. In Imagineers, players are competing to build the best attractions and rides in the theme park using mancala style mechanics. 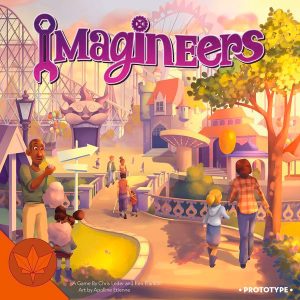 Are you an adventure park junkie? A tilt-a-whirl dervish? A roller coaster connoisseur? In Imagineers, you’ll take on the role of theme park ride designers, competing to create the coolest rides in the park. Get ready to hear the theme park music in your head as you attempt to create the best rides and attractions in the park.

Published by Maple Games, Imagineers is a mancala style game for 2-4 players that takes about 40 minutes to play. It plays best with 4 players.

At the start of a round, the first player reveals an event card and a movement card from each respective deck. The event card alters the rules for the round, and the movement card dictates which groups of guests are eligible to be moved around the park this turn.

Then in order, each player will take their turn which contains three phases. First, a player will play a single tile either attraction side up to the centerboard, or coaster side up to their coaster, and pay any associated cost. If they wish to do neither of these things, they can instead take a “Park Staff” action, off a list of a few generic actions, such as gaining more money.

They then pick up a whole group of park guest meeples that are eligible to move per the Movement card, and proceed to drop one on each Attraction, Coaster, and Shop space as they move around the board clockwise. Then if the right kind of meeple has landed on an attraction, it is scored, awarding bonuses of (usually) money to the owner of the attraction and (usually) happiness to the player who put them there. Then the meeple moves off the attraction and joins whatever group of meeples is waiting on the path that leads out of the attraction. Money is used to install more attractions and coaster parts, while happiness converts into fame every time you lap around your happiness track. If the wrong kind of meeple lands on a space, that meeple isn’t interested in the attraction and simply leaves without anyone getting anything.

A player then ends their turn by drawing a new tile. All tiles are double-sided, but one stack is placed attraction side up and the other coaster part up. A player is free to use either side in a future turn, but they cannot check the backs of either of the tiles available to them, so they must choose based only on what they can see.

If Roller Coaster Tycoon and Five Tribes had a baby, it’d be Imagineers. Careful planning to what attractions you place where is of the utmost importance—miss attracting a customer in an area due to being locked out will cost you in happiness and coin.

The mid-century inspired art will get the carnival music going in your head. Imagineers also has chunky tiles that have a weighty feel, though an inset board would keep them in place a little better, particularly since you’re grabbing around the board so often. The ride name theming is cute as well–who WOULDN’T want to visit One Way Rapids in the spooky area?

The limitations on what groups can be picked up and when add to decision making. Since every group is not available every time, players will need to take a moment or two to determine what might benefit themselves best (or at least their opponents least).

When it comes to players scaling, larger player counts are a must. While the board will generally be filled regardless, its far more fun and interesting when its more folks vying for the same handful of customers.

Finally, the rulebook is well laid out but awkwardly sized—there is a reason best sellers do not measure over 24” when opened. However the examples in the rulebook are plentiful and a solo variant is included, which was a nice bonus!

Adventure park adepts will enjoy the taste of park planning in Imagineers. More ride designers will make the competition for customers more fierce, so shoot for the higher player count when playing Imagineers. The limiting mancala style distribution mechanic makes for some interesting decision making, though it may lengthen the game for those that need time to analyze every move for every detail. The rulebook was easy to follow, but its unwieldy size made it cumbersome to use on the table.

Final Score: 4 Stars – Cute mid-century artwork and circus-like meeples will have you hear the merry go round music. Mancala mechanics and the thoughtful building will have you buying the large gulp to stay all day for free refills

Misses:
• Tiles are going to shift every time you go to move customers.
• Seriously, why the heck is this rulebook so big?!