We review Homebrewers, a dice rolling and set collection board game published by Greater than Games. In Homebrewers, players are microbrewers trying to make the best beers. 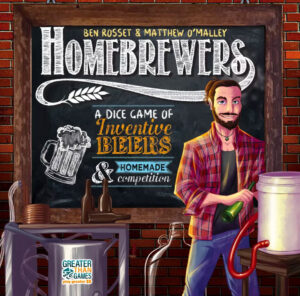 Board games and beer have more in common than just a couple of letters. They bring people together, help people have fun, and are available in a variety of styles with broad appeal. There are also mass-market versions that most people think of when they hear the name that makes enthusiasts groan. I believe there’s a board game for everyone and there’s a beer for everyone as well (with the exception on the latter for those who may have reasons to abstain).

And beer and board games pair well together in moderation. So, what happens when a beer-themed board game about brewing pairs up with a former home brewer board game reviewer? Probably some dad jokes. Anyhow, crack open a cold one, unless you’re on the job where that’s frowned upon, and read on about the game Homebrewers by Ben Rosset and Mathew O’Malley.

Homebrewers takes place over rounds that represent monthly gatherings of a local home brew club. The game is split across two phases and eight months.

During the Trade phase, which represents the brewing club meetings, flip over that month’s event tile, roll your dice, and trade with the other players, if you’d like. You’re allowed to trade dice with other players and if you ever have three of a kind through rolling or trading you can reroll them for free. You can also spend $1 to assign a die to a specific action.

The Action Phase, representing the weekend activities, is where you are brewing like Hanson Brothers (both the pop band and the punk band). Here you spend the dice you rolled, traded, and manipulated.

The dice actions are
• Gain Grain – take a grain token and add it to one of your recipes. One grain token is needed to brew a batch of beer.
• Flavor Card – Either take one of the four face-up cards or the top face down card. Or assign a flavor you already have or discard the card to gain the action at the bottom.
• Brew Beer – Move up the quality track for the beer being brewed based on the left most open slot on your sanitation track, collecting benefits on flavor cards and on the modular portion of the quality track. Then flip and move the grain to that slot where it represents trub, which is the solids left over from fermentation.
• Sanitize – Remove the right most trub token from your sanitation track.
• Event – Trigger that month’s randomized calendar event. Those copy one of the above actions. There’s also an option to pay $2 and take a more powerful action.

Does trub make you sad? It’s a natural sediment.

The game has a modular setup with randomized events on six of the eight months, six randomized quality track tiles, and four out of five judge tiles. The player boards can be played either with specialized tracks and individual player powers or with everyone having a uniform sanitation track.

As stated in the introduction, I used to homebrew beer with a friend so out of the gate the theme of this game is appealing to me. The designers come across as beer lovers and the beer glass-shaped player markers, player board design, grain turning to trub, and the sanitation mechanic show a great attention to detail. There’s a lot of washing and sanitizing in brewing.

The only place the theme was hard for me, was the flavor cards. A sour cherry, milk, ginger, and espresso IPA could gain you a lot of reputation. But it sounds repulsive. But this will likely only bother hardcore beer geeks or close-minded hardcore beer geeks. And, as a counterpoint, there are some real oddball beers out there that are delicious.

I generally enjoy dice allocation as I get to roll dice and then put my master plan into action and that’s where Homebrewers really excelled for me. Trying to anticipate the actions needed to set up big turns is exciting and the ability to spend money to gain the actions you want or trigger your special ability means you’ll rarely have a useless turn.

I loved the idea of trading with other players as I visualized trading someone some grain if they’d clean my sludgy carboy. This mechanic worked except trading with other players sometimes felt unbalanced in the sense that trading my wheat for their sanitizing action helps them now and me later. The core of the game is building up that weirdly flavored beer engine so waiting a round is not usually going to hurt you.

Two player games include an AI named Charlie. Charlie can’t win the game but ends up taking awards and affecting end scoring a little bit. But Charlie is also a giver so you can trade dice with them (Charlie’s pronouns in a nice touch of inclusion). In those two player games, I mostly traded with Charlie including to get Charlie to get three of a kind to reroll their dice to see if that helped me even more. I haven’t tried it yet in higher player count games but I’m wondering if always including Charlie or at least a neutral set of dice wouldn’t give player more options to make games even more competitive.

Compared to heavier beer themed games like Brew Crafters (2013, Ben Rosset) or Heaven and Ale (2017, Michael Kiesling and Andrews Schmidt) Homebrewers is very accessible and easy to grasp. Put a wheat token in a bucket, spend a die to brew, and move up a track collecting bonuses. Hardcore gamers looking for something deeper will likely find trying to balance the four tracks, sanitizing their rack, and optimizing flavor selections for scoring satisfying enough but it may go flat after a few plays. The variables mentioned towards the end of the overview section, along with the large variety of flavor cards, will make each game a little different.

Homebrewers is a fun and accessible beer themed game that’s less filling but still tastes great. But, unlike that beer slogan I just repurposed, it’s a step past gateway/mass market. The lightweight nature makes this best suited for a casual game night with beer lovers, but you make get some raised eyebrows over your oyster and kimchi stout.

If I was giving Homebrewers an Untappd review it would be: Dice rolling and allocation backbone with a hint of trading and manipulation on the nose. The flavor-based engine building adds some complexity in the body with unique player powers adding to the game’s smooth finish.

Hits:
• There’s always something to do with your dice/actions
• Intuitive with the unique theme
• Randomized set up makes each game different
• Charlie always gave me the dice I needed (and yet still made better beer than me)

Misses:
• Not a lot of discovery after a few games
• Flavor combinations can be weird
• Dice trading was hit and miss