We review the Herbaceous Pocket Edition from Pencil First Games. This version of Herbaceous has been shrunk down for easy portability that will appeal to the gamer on the go. 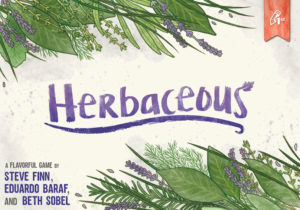 Way back in simpler times… 2017… Pencil First games published Herbaceous. A simple filler game that Tony (and his mom!) reviewed here on the BGQ. Now, in perhaps less simple times, Herbaceous is back, but smaller. Small enough to fit in your pocket even. You know that because it is called Herbaceous: Pocket Edition.

The game is largely the same, just hit with the shrink ray from Honey I Shrunk the Kids. But, luckily for us all, I am not the same as Tony and have a whole lot of opinions so let’s start planting and see what sprouts, ya know?

The rules are unchanged from the original and simple enough to be explained in about two minutes.

Each player gets four pots to plant herbs in. One that wants all the same, one that wants all different, and one for pairs or like herbs. The fourth, the glass jar, can have any three herbs but is the only pot you can plant the special herbs that are worth bonus points.

On your turn, you can (optionally) first plant any herbs in a pot. To do so, you take any herbs you want from the community garden and your personal garden and put them in the container. Each pot can only be used once per game so once you’ve put anything at all in it you can never go back and add to it.

Then you draw two herb cards, one at a time. After you draw the first one you choose whether to put it in your personal garden or the community garden. Then the second card goes wherever the first one didn’t. That’s it. Your turn is over.

Play continues until all players have planted in all their pots or can no longer do so. When the draw deck runs out, players can still plant whatever is in the community and their personal gardens, if able. You then tally points based on the number of cards in each pot and whoever has the most points wins.

As much as I like giving Tony a hard time, he was pretty much dead-on in his review of Herbaceous. The press-your-luck elements of when to fill your pots make for some interesting moments in a game that you can set up, teach, and play in about 15 minutes. It’s exactly what a filler game should be.

I especially love how the end of the game starts winding down. Generally, you are going to be trying to maximize the number of herbs you can plant, obviously. But there is a time in the game where you see the end approaching and maybe the best bet is to steal whatever you can get from the community garden before it’s too late, even if that means not necessarily maximum points for you because it will hamstring your opponents quite dramatically.

Who would have thought a game of planting herbs could be so cutthroat?

And the pocket edition here is undoubtedly the superior product. The mini-sized cards are plenty big enough to be usable and it’s the exact type of game you might want to carry along with you to play in a park or while hanging out at a brewery or whatever. It will likely fit anywhere there is a flat surface. Heck, probably even manage to play it on your tray tables during a flight. The only downside is they didn’t manage to squeeze in the name of the herb on the card so you’ll have to just stick to matching up pictures if you can’t tell dill from thyme.

Tony mentioned a lack of variety in his review of Herbaceous and it’s certainly true that each game feels pretty same-y. But in this length and style of filler game, I don’t necessarily think I mind quite as much as he did.

Herbaceous was already a good game that has been out in the world for over four years. If you’ve never had the pleasure of playing it, I think the new pocket edition is certainly the way to go. It’s a fun filler game that you might actually want to keep in your bag just for occasions where you need to kill some time.

The game has a lot of direct interaction between players, so if fighting for cards feels mean to you, it may not be your type of game. But that mechanism leads to a lot of tense moments where you have to decide to take what you can right now or risk someone else grabbing all those delicious herbs before you get a chance. Dead simple mechanisms sometimes make for really fun experiences.

Final Score: 4 Stars – Great filler game. Press your luck aspect is really against other players which makes for some fun/mean moments.

Hits:
• Easy to learn, teach, and play in 15 minutes.
• Small form factor is perfect for taking on the go.
• Love the interaction between players and tough decisions on when to plant.

Misses:
• Fighting over the same cards can feel a bit take-that.
• Variety from game to game is nonexistent.