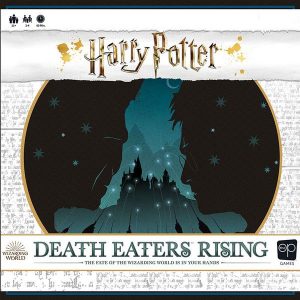 This is my second Harry Potter game review (you can read the first one here if you are interested) and I can say right away that this one played much better than the first one. If you want more details than that, read on!

Harry Potter: Death Eaters Rising is a co-op game for 2-4 players that takes about an hour to play. The best experience is with two players for more manageable strategizing and standardized game time.

Players get to choose an affiliation with Hogwarts, Order of the Phoenix, or Dumbledore’s Army, all of which have characters from the books that were known to fight those nasty Death Eaters and their networks. Three characters at random, inclusive of Death Eaters, start at one of the following locations: Ministry of Magic, Diagon Alley, and Hogsmeade.

On your turn, you’ll travel to one of the three locations, roll a custom die that represents Voldemort and the Death Eater actions, then roll and resolve your pool of Wizard dice.

Wizard Dice represent the traits of Friendship, Loyalty, Knowledge, and Bravery that are used as resources to activate abilities of characters on your Wizard team and/or affiliation. Every counter of damage dealt to a Death Eater results in a Spell token that has a variety of effects to assist your or other players.

There are four ways to lose and one way to win. You win by defeating Lord Voldemort but you can lose when too many wizards are defeated (scales off of player count), any one player has no wizards remaining, four or more places are corrupted, or any one location is totally corrupted (both places and the base location itself).

To defeat Voldemort, the Voldemort card must have been revealed from the deck and dealt five damage. The catch is, the maximum damage a player can deal to Voldemort on their turn is equal to the number of Death Eaters previously defeated. So there is no feasible way to beat Voldemort without also having spent resources beating up Death Eaters!

I have to admit that it took a couple plays of this game to fully understand it and get a groove in the phases. Since there is so much housekeeping—no pun intended—I’m fairly certain my first play was harder than it needed to be. When looking at the balance of Character cards, I wish there was a way to ensure that the Death Eaters are not front-loaded. It simply says during setup to “Place 3 Character cards face-up next to each of the 3 Places”.

If the deck is not shuffled thoroughly enough, even though 22% of it is made up of Death Eaters, the fact that Voldemort gets to have a turn on every player’s turn and not just once during the round is bonkers. I understand that the title of the game is Death Eaters Rising and it’s supposed to feel overwhelming and impossible but one person’s turn takes so long as it is. You can completely fall asleep in between your turns unless you have some Spell tokens to contribute to the active player. The wild swings of luck in this game annoy me greatly, despite the promise of agency in choosing your team and using your resources.

My favorite part of this game was the dice rolling and resource allocations. The puzzle of trying to figure out what actions were worthwhile or if you were just beating your head against an unsolvable problem was rewarding. But those elated feelings would quickly dissipate when it was Voldemort’s turn. There was no true ability to plan or save time because the state of the damage dealt or taken could change on every person’s turn. It extended the game time too much when luck was not on your side.

Harry Potter: Death Eaters Rising is for those looking for a thematic co-op that requires strategically building a team and managing resources from dice. If you can handle the amount of unpredictable damage caused by Voldemort’s plans, this should be great fun.

Misses:
• No real sense of agency
• Starting resources are unrealistic
• Gameplay is either too long or too short