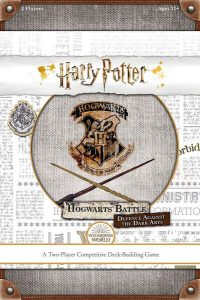 Harry Potter Hogwarts Battle: Defence Against the Dark Arts is a two-player deck builder based the fantastical Wizarding World from J.K. Rowling. This is a competitive deck-building game for two players, played over a variable number of rounds. Albus Dumbledore has authorized practical Defence Against the Dark Arts lessons to ensure that students are prepared to defend themselves.

When this game was announced, I immediately wanted to play it as Harry Potter has been a formative part of my early adulthood. I remember enjoying the segments in the books related to fighting Death Eaters and other baddies the best, so this struck a chord with me. I’m very much a learn-by-doing woman and getting the students out of their books and onto the field was an exciting concept. Full Disclosure: I haven’t played the original Hogwarts Battle game, so please keep that in mind throughout my review.

In Defence Against the Dark Arts, you’ll have the opportunity in the classroom or public market to learn new spells, head to the library for book cards to acquire resources, and generate hex cards that have surprise attacks on your opponent to debilitate them in some way. To win, you must be the first to stun your opponent three times (or, more simply put, deal out 18 damage over the course of the game).

Each player luckily doesn’t start off empty-handed; part of the setup is the self-assignment to a Hogwarts house (Gryffindor, Hufflepuff, Ravenclaw, or Slytherin), gaining starting spells, a wand, a cauldron, and an animal ally (cat, toad, or owl). If you are not choosing your house based on your fandom, there is a benefit to considering their specialization on certain item or spell cards. While you’ll always be able to get the default effect, if you belong to the house assigned to that item or spell you’ll get an additional special effect. Thematically, this means that you already have the affinity for using that skill and therefore can do much more with it than a layperson.

As you build out your deck, you need to remember that there is a five-card hand limit for the rest of the game. Unlike many deck builders, thinning strategies are not important here. There is also a use-it-or-lose-it requirement to discard any unused monies, attack, health, and influence tokens back to the pool, so the timing of resource acquisition, resource allocation, and playing cards are crucial.

There is, as with most thematic games I’ve played, an element of chaos you’ll run into. In this game, this is known as a hex card. As these cards come into play, you will quickly realize that because they must always be resolved first on your turn they will derail your plans slightly. If you draw a hex later during the turn, it must also be resolved immediately and naturally create a never-ending cycle of misery.

Gameplay continues until a player has received their third stun token. The player who stunned their opponent three times wins.

As I mentioned earlier, deck builders traditionally encourage the management of card acquisition versus deck thinning. A rare opportunity in the game known as banishing allows you to remove cards from the game and thin your deck, but when I played this I had terrible luck finding cards in the market cycles that gave me permission to thin. There are actually only two of these in the entire game, so perhaps you would never get to it anyway. The way around this is to assign yourself to the Gryffindor house due to their specialty. The inability to thin is especially problematic when flooded with hex cards, which can only be removed with one of those rare cards. I disappointedly realized over time that this game favors the hex interrupts and it speaks volumes about the intent of the game that an incredibly low percentage of cards can help mitigate them.

While managing win conditions, I kept ebbing in and out of 4 damage before my opponent managed to heal again. Based on Harry Potter: Hogwarts Battle rules, you have to actually gain the health, not just play a card that would give the ability to do so. My only complaint about this feature is that I don’t remember healing in the actual books. I also am logically unable to explain how, as students, you are permitted to drag in Snape or Dumbledore for help in your duel while class is in session.

You are often resource-starved in this game despite the game adamantly mentioning its use-it-or-lose-it rule. As I thumbed through the cards in this game, I found that the two houses with allies that keep you resource satiated are Gryffindor and Hufflepuff. Ravenclaw—which I chose my first game—mostly focuses on drawing cards. However, if you haven’t had the luck of actually obtaining cards that provide you with resources, then you’re drawing cards you don’t even have the ability to use. It seems more consistent to have a useful wizard ally, which Ravenclaw has none of. This is especially painful because I am a self-proclaimed real-life Ravenclaw and I refuse to believe that we could even get the short end of the stick in this game.

A couple of houses that I specifically have beef with in this game are Slytherin and Hufflepuff. Slytherin is quite good at flooding their opponent’s deck with hexes and killing the “good cards” in their deck to slow them down. It is important to take note that their good cards are not permanently out of the game, but the opponent will still need to deplete their deck in order to get to them to cycle in again from their discard pile. Hufflepuff has bonus cards that allow them to draw more cards as well as resources. Therefore, you can imagine that if you are acquiring both that your plans to push your opponent to a stunned state are guaranteed.

Despite the appealing theme, Harry Potter: Defense Against the Dark Arts is too long for what it is and the lack of agency you experience in gameplay is unmotivating. Factoring in the lack of agency, a combination of the luck in the market, and the chosen Hogwarts house can often guarantee a victory. It is certainly not the game for those with a history of playing deck builders that are used for deck thinning and resource management. To me, the only draws of Defense Against the Dark Arts are to get into the magic, perform the motions for the spells, and lean heavily into the possibly-overpowered Hogwarts house assignment.

Final Score: 3 Stars – A surprisingly long, two-player deck-building game set in the Wizarding World of Harry Potter that will delight but also derail the players.

Hits:
• Theme shines through the items and spells
• Straightforward card market for deck building
• Hexes are reminiscent of adolescent trolling