We review Papayoo, a trick-taking game where you try not to gain points by collecting cards from the Payoo suit and the dreaded Papayoo card. With some comparisons to hearts, Papayoo still has enough legs to stand on its own. 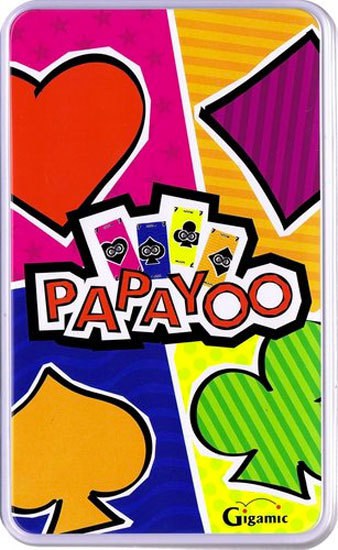 I don’t mean to brag but I was the Spades Champion of my collages’ South Quad for two years in a row. I’ve played many trick-taking games like Hearts, Pinochle and even Bridge over my life time. I enjoy trick-taking games because they’re so different than card games like Poker. It’s mainly because you try to play the best card available each hand and you really don’t need to read and play the other players.

Papayoo is a trick-taking game for 2-8 players and plays around 30 minutes. Papayoo plays best with 3+ players.

Papayoo is a straightforward trick-taking game. You try to get rid of your cards but try not to collect points. You receive points by collecting cards from the Payoo suit and the dreaded Papayoo card.

Papayoo is light on components because it’s mainly cards. But these cards are of excellent quality and should hold up to shuffling and playing. It is worth noting that the cards are larger than your typical playing cards making it easier with hand shuffling but not useable with an auto shuffler (I tried).

The card artwork is also different from standard playing cards with brighter and more abstract color and images. The traditional suit iconography is basically the same spade, heart, diamond, and clubs that you’re used to. The Payoo suit is the simplest looking but it stands out from the other suits. All Papayoo cards at first glance seem a bit odd but you get used to it.

The rules are presented in a two simple pages but come in 24 different languages, which make the rule book thick. The rules are straight forward but there are some details that are confusing possibly due to translation. I reached out to Gigamic and they quickly gave me answers and they will be revising the rules in reprints.

The last thing to note is that the game comes with an eight sided die and a tin. The die contains each of the 4 traditional suits twice. The iconography matches the cards so there should be little confusion as to what the Papayoo suit card is. The tin holds all the pieces, helps protect the cards and makes this a nice travel game.

Before we discuss how to play, it’s important to outline the number of cards in Papayoo. Each traditional suit (hearts, spades, diamonds and clubs) only has 10 cards, numbered 1-10, but the Payoo suit has 20 cards numbered 1-20 – so the game has a total of 60 cards.

Set-up is simple. All 60 cards are shuffled and dealt out to each player equally. Each player then selects 3-5 cards (varies by player count) from their hands and they pass those cards to the player on their left. Those cards are then added to the new player’s hand.

After all players incorporate the pass cards, then the eight sided die is then rolled. The 7 card of the suit indicated on the die becomes the Papayoo.

The dealer starts by playing a card from their hand to the middle of the table. Each trick is won by the player who plays the highest card of that suit.

After all tricks are collected, players tally all their Payoo (the face value of the card in points) and if they collected the Papayoo card (worth 40 points) for that hand. The total points per hand should equal 250.

Papayoo game length is typically 4 hands and the player with the lowest point total at the end of the 4th hand is the winner.

I have to admit that Papayoo was a pleasant surprise for me. I really didn’t want to like it because of how odd the cards looked and felt since they’re larger than a traditional deck of playing cards. After the first hand, I have to say it won me over and I’ve been having fun with it since.

If I had to compare it to another trick-taking game, then I would say Hearts would be the closest. Its premise is very similar where you’re trying not to collect points. Similarly, like Hearts you have one high value card like the Queen of Spades. Lastly, you select cards from your hand and pass to other players as well.

Now the comparison dwindles significantly because the starting player is determined by who the dealer is for that hand instead of the 2 of clubs like Hearts and, in Papayoo, dealing rotates around the table. Another big difference is the Papayoo card (high value) is randomly determined with the 8-sided die and not set like the Queen of Spades in Hearts. But the biggest difference to Hearts and other trick-taking games is you have a significantly more Payoo value cards compared to the traditional suits so it’s very hard not to collect points each round.

One aspect of Papayoo that appealed to me immediately is that you don’t have to have exactly 4 players. I know there are rules for 5-6 players for some trick-taking like Hearts but those are not ideal. Hearts and other trick-taking games usually hit their sweet spot with 4 players. I found Papayoo plays best at 3-8 players and the gameplay didn’t diminish. It was a nice change of pace to not playing at a set 4 player count. Sure the game differs with the number of cards you play and pass, but not its level of play.

The other plus for me is that Papayoo appeals to my kids. They can count 1 to 20 and understand higher number values. I’ve tried trick-taking games with them using traditional playing cards but the Jack, Queen, King and Ace values would confuse them. But in Papayoo you only have numbers on the cards so my kids were able to play and master the game quickly.

I think the only down side is when I think of my serious Euro and Wargaming friends who would think Papayoo is no more than a filler game at best. As we get older, all my friends value their time and with game time being finite I don’t think my serious gamer buds would invest an evening playing a trick-taking game for more than 1 hand or at all. Papayoo would better fit as a travel game or with casual, new, or younger gamers.

I think Gigamic did a great job creating a new and different kind of trick-taking card game. Yes, you can draw comparisons to Hearts, but Papayoo has enough different mechanics that makes it stand on its own. The randomness of the Papayoo card and the higher player count really do set this apart from classic trick-taking games.

Papayoo is easy to learn and master, but some of the rules are slightly confusing and it seems this is due to it being translated. Gigamic responded to my questions quickly and acknowledged something might have been lost in translation. If you play with some serious gamers they will not likely want to play Papayoo for too long.

If you are interested in getting a copy of Papayoo you can pick it up for about $12.

Final Score: 4 Stars – A really fun and unique trick-taking card game that is easy to learn and play.

Misses:
• Translated rules are slightly confusing
• Only a filler game for hardcore gamers