We review Going Concern, a card drafting and economic game published by Black Pool Games. In Going Concern, players are trying to earn the most money over the course of the game. 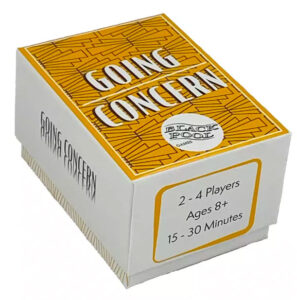 Sit down. Straighten up. There’s some accounting education necessary for this review. A “going concern” is defined as follows:

“The going concern assumption is a basic underlying assumption of accounting. For a company to be a going concern, it must be able to continue operating long enough to carry out its commitments, obligations, objectives, and so on. In other words, the company will not have to liquidate or be forced out of business.”

This is the title of the next game up for audit. New designer Henry Utschig and new publisher Black Pool Games hope that distilling the definition above into a short, accessible game will bring some levity to gaming evenings. It’s a short card game for 2-4 players that takes 30 minutes to play. It’s best with 3-4 players.

There is no complex modeling of accounting transactions here. Going Concern begins with $20 startup capital for every player (just assume it’s thousands or millions). Players will take turns during two different round phases: the Concerns Phase and the Risk Phase.

During the Concerns Phase, a payout for manufacturing occurs (more below) and then the deck of concern cards reveals 4 businesses in a market row available for purchase. Each card shows how much it costs, the type, and how it pays out: fixed or based on a die roll. Shrewd players will be able to calculate the profitability chance of a business based on this over the course of the game, taking the die rolls into account. All players get a chance to purchase a single card round-robin. If any cards are left over, the process is repeated until all players pass. Before the Concerns Phase ends, all other concern cards payout as well.

When a payout occurs depends on the card type. Manufacturing payouts occur before the purchase of concerns so they can provide needed cash while shopping. However, they are also a riskier investment because of their die roll payout. Commodities and real estate payout at non-random rates, but this is after purchase, so players might see the money quickly from those purchases.

Then comes the Risk Phase. The risk deck shows a variety of cards with events that impact the different concerns. For example, a Manufacturing Cycle card means that there’s an upturn or downturn in the profitability of manufacturing and so there’s a die roll chance for players to lose those cards entirely or gain huge windfalls. The way to protect cards when this occurs is to “hire” a politician. Ostensibly this is government action to subsidize these businesses or bail them out. There are also tax season cards that restrict the flow of money in the game.

Since the number of different types of risk cards is known, players can watch the cards to have an educated guess as to which concerns are likely to be riskier as the game moves toward the conclusion. At the end, all concerns are sold and the player, as expected, with the most money wins.

Game reviewers see a wide variety of games come across their gaming tables. There are games with crazy themes, games with component bling that boggles the mind, and then there are games like Going Concern. It’s a competent design that could use a little polish in the rules, but it presents itself as all procedure with little elaboration.

For some gamers, especially gamers who love economic themes, this is fine and for a new publisher, it’s expected that component design is minimized to reduce cost. However, where the game should shine is in the mechanisms and inviting theme, and here Going Concern is unfortunately predictable.

Since the number and types of remaining risk cards rule the calculations of what concerns to buy, players will usually play to the odds assuming they can keep these in their heads. Unless a player manages via turn order to acquire a politician, the risk that their concerns get wiped from the board creates a push-your-luck element as to how much they’re worth. In addition, the manufacturing cycle can be immensely swingy, changing the fortunes of one player via the odds of a die roll. This amount of randomness from the card draws and the die rolls are likely to disrupt the enjoyment of more than one player who feels they played the odds correctly.

Going Concern works as a game, but the balance between what players who would enjoy it expect and what it delivers are sometimes on opposite ends of the spectrum. It’s fine as a beer-and-pretzels game between heavier titles, but if players take everything it offers too seriously, they’re likely to be disappointed. What it offers isn’t revolutionary, but for some gamers, it might be just the right package.

Final Score: 2.5 Stars – A by-the-numbers exercise in profit probability calculations, as long as players can handle the randomness.