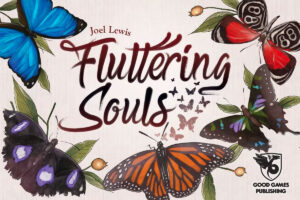 Lots of my favorite games come in big boxes. Big boxes usually house complex games with oodles of components, rulebooks with more than fifteen pages, and sometimes need an insert to help organize the fun inside. The problem that has arisen for Marianne and I is that traveling with more than a couple of big box games creates huge problems for a family that travels for work. So, what has been a solution for us? No, the answer isn’t to take fewer games. It’s to bring more small box games. Fluttering Souls is most definitely fits the bill for a small box game. Everything that is stored inside totals up to 41 components: 36 cards and five wooden butterflies.

Not only is it a small box game, but it also strives to join the club of drafting games that play well at two players. It’s a somewhat elusive category with 7 Wonders Duel, Sagrada, Tides of Time, and the newly-reprinted Ginkopolis leading the pack as some of the best two-player drafting games. And one can’t help but mention the colorful pictures Fluttering Souls sports on its cards.

The rules overhead are quite minimal for Fluttering Souls. To start the game, both the butterfly cards and the layout cards are shuffled separately. One layout card is flipped face-up and the butterfly cards are placed exactly as the card pictures, with some face down and the majority face up. Two cards will be leftover and are set aside face down until the next round. The player with the most colorful outfit is the first player and the other is handed the Great Eggfly card, which is not included in the grid.

On a player’s turn, they must take a card from the table. Only cards that are fully uncovered may be chosen, so in the first turn, only the bottom cards are available. If a player holds the Great Eggfly card, they may place it in the spot where they just drafted a card. Each card has some symbology, telling how many of that butterfly is in the deck (but not always in the pyramid) as well as the possible points they can score.

After all the cards have been drafted, points are tallied up between the players. Whoever scores the most from their sets of butterflies is awarded one of the wooden white butterflies. If there is a tie, the person who holds the Great Eggfly gets the white butterfly. The first to get three white butterflies wins Fluttering Souls.

If a game of Fluttering Souls sounds like it would play in no time, that would be a correct assessment. The box states that it plays in 20 minutes, and that is only if a game would go the full five rounds. If one player gets a clean sweep and nabs three butterflies in a row, it can be over in as quick as 10 minutes. Few games offer a playtime that quick, particularly in a packaging this size.

Speaking of the packaging, it’s a very transportable game, small enough to fit in a coat pocket. In fact, it could have even been in a smaller box. The only thing of size is the cards and devoting half the box to five wooden butterflies is a stretch. Even so, it’s still one that owners could realistically take anywhere.

Initially, I thought the theme was light-hearted. The rules feature a Japanese legend pertaining to the White Butterfly, which is why players are collecting them to win the game. But in reality, this is a fairly themeless card game, in that the butterflies and the legend don’t come out through the mechanics. The art on the cards is nice, giving lots of color to the five different species of butterflies, so I can’t really knock the theme.

Mechanically though, Fluttering Souls doesn’t do anything new or innovative. I used 7 Wonders Duel as an example of drafting for two players in the intro, but in reality, Fluttering Souls has the exact same style of drafting. Both use pyramid layouts to distribute the cards as opposed to the traditional “take one and pass” model. Both feature cards in that pyramid that are face down so the drafting isn’t solvable. And both have changing layouts with each round of play. Fluttering Souls, instead of having a changing deck of cards as the game goes along, has players reshuffling the cards and the two leftovers are set aside.

Even the Great Eggfly card used for blocking cards and breaking ties is quite like the initiative card that’s used in the Combat Commander series. Granted, it has a different purpose, one offering a reroll, one taking the place of a drafted card. But it’s a decision of when to use it, when to draft it, and when to hold on to it for tiebreaker purposes, similar to the lengthy wargame.

The biggest issue I have is the small number of different butterflies one can pursue for points. Discounting the Great Eggfly (which isn’t worth points) there are only four species of butterflies that a player can draft. The layout features 18 cards, and one of the most common, the Eighty-eight, has the potential to make up 44% of the cards that a player can take. The other most common species, the Blue Morpho, can be a third of the total cards available. This, combined with scoring that all feels the same among the four butterflies, builds to make rounds that have little difference between each other.

While I appreciate the quick playtime, simple rules, and portability, Fluttering Souls is not one I see myself coming back to. What it lacks is strategic depth and replayability. The deck of cards is quite small, so the formations and low number of species. don’t do enough to make each game feel different. Every game the same decisions are going to be mulled over. Fluttering Souls is not a bad game. For some gamers, it’s what they’re looking for in a travel two-player game. And the art is a nice addition to the card.