We review the medieval card game Fidelitas by Green Couch Games. In this easy-to-learn game, players are trying to position their assets around the city in the hopes of completing their hidden objective cards. 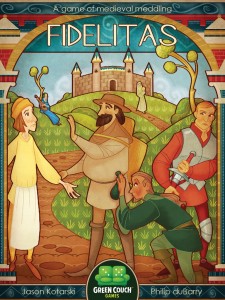 The government has gone corrupt (shocking right?). No, not those clowns down in the state capitol, I’m talking about The Crown. They have finally taken things too far and the citizens in this Medieval city are preparing for a rebellion. Time to see if we can extend our influence enough throughout the city and lead this coming revolution.

Today we are going to be looking at Fidelitas, the first offering from new publisher Green Couch Games. Designed by veteran game designers Jason Kotarski (The Great Heartland Hauling Co, FrogFlip) and Philip duBarry (Revolution!), Fidelitas seeks to have players maneuvering citizens around town to achieve their hidden objectives. Is this quick playing game of medieval posturing fun or should it be given the axe. Let’s find out.

Fidelitas is a hand management card game for 2-4 players that takes about 20 minutes to play. Fidelitas plays best with 2 players.

The players’ main goal in this light game is to place their citizens from their hand into various locations around the city. Doing so allows them to not only manipulate other citizens in the city, but it also might let them accomplish one of their hidden objectives.

Accomplishing an objective earns the player victory points, with the first player to a set number (depending on the amount of players) being deemed to be worthy of leading the revolution and wins the game.

With Fidelitas being a card game, the main focus is on the cards themselves. Overall they seem to be printed on good quality of card stock and we have no issues about them holding up over time.

I’d say the best part of the game production though was the great artwork. It almost feels as if it’s been lifted from a medieval era manuscript, which works very well with the theme of the game. I can picture some monk, in a dusty vault, laboring over a sheet of parchment drawing out these characters. Props to Green Couch Games for choosing an artist and design that works really well with the game.

Finally the rulebook feels well done and was easy to learn the game from, with one notable exception. Some of the language on the objective cards were a bit confusing and could have used some clarity. Cards will say “gather X number of people at Y location”. This is normally fine, but I was initially confused as to what “gather” meant. The rulebook had no explanation of this term and I eventually had to hop online to find out it just meant that the characters needed to be at the location when you scored them. You don’t actually have to pick them up or anything.

As mentioned earlier, Fidelitas is a really light game. If it takes you more than 2 minutes to explain the rules, you are probably reading the wrong rulebook.

Once the city cards are laid out and both decks are shuffled, each player draws two Virtus (character) cards and two Missio (objective) cards.

Starting with the start playing and going clockwise, each players turn consists of the following steps:

1. Play a Virtus card: If the guild of the character played matches one of the 4 city locations, it must be played to that location. If it’s one of the 5 other guilds, it can be played anywhere. Then, carry out the action on the card played. This is usually moving characters around the city or drawing cards.

2. Score 1 or more Missio cards (optional): If you’ve fulfilled the objective on the Missio card, place it into your score pile.

3. Draw a new Virtus card: If the Virtus card you played has the “no draw” symbol on it, then you don’t draw a new card. This is usually because the character you played already let you draw for some reason. If you scored any Missio cards, draw to replace them as well.

Turns continue in that manner until one player has scored the appropriate amount of victory points and wins (10, 8, or 6 points depending on the player count).

I was first attracted to Fidelitas by its creative artwork and design. As I mentioned earlier, this was thematically a fantastic choice. I almost felt like I was a power broker in the Middle Ages, placing my servants around the city as a commander might place military units on the map. If only I had a riding crop to move them around.

Moving on from the artwork, the game as a whole felt really solid. It is definitely on the light spectrum of games, easily falling into the filler game category. It’s easy to learn rules make it a good choice to reach for when you have some time to burn. More than once we’ve brought it to the gaming table while we were waiting for people to arrive.

It’s also that accessible nature that makes it a game that you could easily pull out with your non-gamer friends. The rules are simple (play a card, score a card) that it will probably feel familiar to anyone who has played a game of rummy in their day. Turns also will go by quickly with very minimal downtime.

However, that light feel to it also made it start to outstay its welcome a little sooner than I would have wanted. Overall the type of cards in the deck could have been a bit more diverse. During the course of the game, I felt like I was seeing some of the same cards over and over, which while it helped keep the game balanced, it did start to feel a little repetitive at times. I think a bit more variety in Fidelitas could have helped it stay fresher after repeated plays.

When it comes to player count, I think that Fidelitas works best as a two player game. When you get to 3-4 players, the game can start to feel a little chaotic. There were times I completed an objective card without even playing one card. The board state can just change so much between turns, that I feel like the game loses a little too much control for my tastes. The game did suggest playing in teams with 4 players, but that also felt a bit weird. I never really felt like were working as a team.

However, with 2 players, Fidelitas can be quite fun. Its tactical nature allows you to both react your opponents moves quickly and also try to mess with their plans. The back and forth nature of the game had a good ebb and flow to it, and I always felt like I had a least a semblance of control that was missing at the higher player counts.

While I think Fidelitas is definitely a game that can be played with anyone, I do think it plays best with some experienced players. When two players know all the cards in the game, they have a much better chance of both scoring their own Missio cards and also messing up their opponent’s plans. When you know what all the objectives are, the game can become a bit more strategic as you have a good chance to figure out what your opponent is going for and stopping them.

Finally, one thing to be aware of is luck is definitely going to play a part in Fidelitas. As with any card games, drawing the right card at the right time can make all the difference. The designers did a good job in including the tavern location which lets players dump unwanted objective cards. This can help you get rid of that Missio card which you know you won’t be accomplishing. However, due to the hand limit of only 2 of each card, your options are still going to be a bit limited on your turn. There were definitely some turns where I just played a card to get rid of it out of my hand.

Overall I enjoyed the first offering from new publisher Green Couch Games. While Fidelitas didn’t knock my socks off with some new mechanics, the familiar nature of the game and accessible rules, do make it a great filler game. The production quality of both the components and the artwork give me a lot of hope for future offerings from them. Green Couch Games seems to know what they are doing.

While Fidelitas could have used a bit more variety in the cards, it’s low price point and easy to learn nature make it an idea game if you are just looking to unwind and relax. If you are a fan of tactical card games and are looking for an accessible game that plays well with two, give Fidelitas a look.

If you’d like to get a copy of Fidelitas, you can pick it up for about $20.

Final Score: 3.5 Stars – An easy to learn card game with some solid mechanics and very minimal down time.

Misses:
• Cards could use a bit more variety
• Somewhat chaotic with 4 players