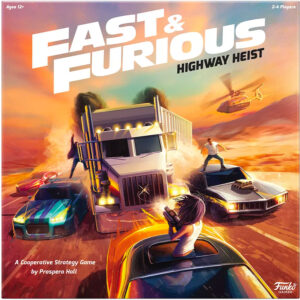 Confession time: I’ve never watched a Fast & Furious movie. I know of them and know that they went from movies about underground street racing to somehow being an A-Team like group taking down criminals with increasingly digitized and completely unrealistic stunts. At first glance, the box art for Fast & Furious Highway Heist gave me Thunder Road feelings, in all the best ways which made me excited to try it. So did the game deliver over-the-top Fast & Furious action or did the action feel like it was shot in Zack Synder’s super slow-motion style?

Fast & Furious Highway Heist comes with three different scenarios that are taking down a tank, stealing goods from a semi-truck with a shotgun happy driver, and taking down a helicopter and armored car. In all of these scenarios, the premise is the same; you’re speeding down the highway and just causing mayhem trying to complete your objective.

You’ll need to pick your scenario and set it up per the instructions. Each player picks a car and a driver that has a special ability and slightly different stats.

Each player’s turn consists of taking up to two actions from the following list:

When you’re rolling a skill check you can use a boost token to count the boost symbols as extra successes. The custom dice included in the game range from zero to two successes. Another player may also spend a boost token to grant you two extra dice, up to a limit of five.

At the end of your turn, you roll the green enemy die to dictate the enemy’s actions. Enemies move or attack when activated and when enemies attack you get to defend with your defense skill with the damage received is the difference between the attack and the number of successes you rolled. If your car is destroyed your character leaps to an adjacent vehicle. There isn’t any player elimination in this game as you can hijack an enemy SUV if you need a new set of wheels or stay on foot, which really means on vehicle because running down the freeway would just be ridiculous.

At the end of each round, wrecks and unmanned vehicles move to the west which represents falling behind the cars speeding down the road. Wrecks can damage or destroy things that run into them as they swipe left like Tinder for destruction fueled automobiles. Also at the end of the turn, a new stunt card is drawn and the other cards are advanced. The card that was in the third position is removed. Stunt cards give players special scenario-based actions to take and grant boost tokens as rewards. Each stunt, except the last one, can only be done one or two times.

The game continues until either the players achieve the win condition, succumb to the scenario’s lose condition, or the last stunt card advances off the board.

With nothing besides a passing knowledge of the IP, I found this game to be very enjoyable with each scenario having a different feel that highlighted different driver skills. Saying the scenarios are silly or jumped the shark doesn’t even begin to cover it but it’s plain, and maybe even a bit stupid, fun.

Turns can be fast and once the rules click, the game’s engine purrs (rumbles) like a tuned up American muscle car that’s about to launch itself at a helicopter off the smoldering wreckage of an SUV.

My biggest surprise was how your turn could also screech to a halt as you play out your different options and think through the possible reactions and the next player’s turn. The game requires some thought and has some strategic depth to it. With drivers and cars getting to roll more dice for specific actions and the game allowing the players to pick their order each turn, there’s a lot of room to collaborate on strategy. That also means that the game can also be quarterbacked by a player. Hate the player, not the game.

My second biggest surprise is that I want to watch some of these movies now.

As cooperative games go, this is a little deeper than the core box of Marvel United but less challenging than Pandemic as you have more actions than the former and fewer problems than the latter to mitigate. The box says 2-4 players but there’s nothing keeping someone from playing this solo as there’s no hidden information between players. The box also says 12+ but this game can be played by younger gamers depending on their exposure to these types of games (and assuming someone else does the heavy lifting for running the nuances of the game). The game is basically a series of car chases and fights so it’s up to each parent to determine if that’s right for their offspring.

The order of the stunt cards coming out, rolling the enemy activation die, and your failures and successes rolling does lend this game a fairly high degree of randomness which can greatly affect the outcome of each game. Sometimes, you can be surrounded by enemy SUVs and everything is fine if you don’t roll the SUV symbol that activates them. But if you do, I hope you get to roll a lot of defense. And if you don’t roll many successes; may I interest you in a slightly used army green SUV?

The toy factor is high in these components with the small car and SUV miniatures as well as big enemy vehicles. The graphic design is also easy to grasp and is clean with intuitive and consistent iconography. Prospero Hall took care of small details like the board has a compass to help you remember directions and there are colored tokens for each player to place under SUVs they’ve hijacked. My biggest complaint with the game is that some of the components sit under the plastic insert instead of making the insert shorter and putting everything on top like most games.

My second biggest complaint is the replay value. With only three scenarios, will this game hold up over repeated plays? I could see the challenge of beating each one once or twice but they may get old after three or four wins each unless you’re a rabid fan of the IP or trying to beat all of the suggested challenge levels. However, with its relatively low price point (~$30) there’s a good fun-to-cost ratio even if the game “only” gets 10 or so plays. After six plays I’m still looking forward to trying different combinations of cars and drivers and have yet to win at the standard difficulty for any of the scenarios and am about 50/50 playing with all nine stunt cards.

Fast & Furious Highway Heist is light and accessible with enough depth to entertain more experienced gamers for at least a few plays. If the IP appeals to you and the randomness doesn’t turn you away, it’s worth a high-speed trip down the highway. If you hate cars and explosions—I’m shocked you made it this far in the review.

Final Score: 4 Stars – Fast & Furious Highway Heist is a dice-driven cooperative game that puts you and your group in the middle of an over-the-top action sequence straight out of a Hollywood blockbuster.

Hits:
• Over the top action makes for exciting and thematic turns
• Various character abilities and car stats allow some customization to your style of play
• Scenarios play to different strengths and playstyles

Misses:
• Only 3 missions included which could get stale after some repeat plays
•  Can have some dud turns where you can’t make progress on any objectives
• High degree of randomness with minimal mitigation available.