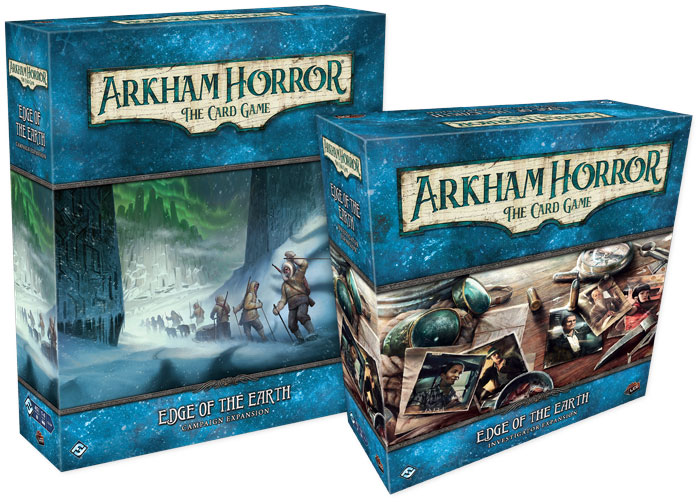 Today, Fantasy Flight Games announced the upcoming release of their newest expansion packs for their Arkham Horror Living Card Game. A new expansion in itself isn’t really breaking news. They’ve been releasing new missions and investigators for years. What is intriguing is they’ve completed changed the distribution model for the game.

In the past, they’d release a big box expansion that had about 3 missions and a handful of new investigators. Then, over the course of the next six months, a monthly mission pack would get released for $15. So, after seven months, you’d have the complete “cycle” with all the missions and new characters.

On paper, it seems simple enough, but if you were a new player, it could be really confusing what you need if you are jumping in the middle of a cycle. Add on to that the worry that something might go out of stock, and you could be left with a partially complete cycle of missions and be forced to hunt things down on the secondary market.

This new expansion, dubbed Edge of the Earth, comes in two parts. One box has a bunch of player options. Five new investors and 250 cards to expand your deck-building options. In the other box (dubbed the campaign expansion) contains over 300 scenario cards to support the entirety of the Edge of the Earth campaign. According to FFG, “While we will no longer be releasing monthly Mythos packs going forward, this single expansion contains about the same amount of content as an entire cycle from the old release model. It’s a full campaign all in one package!”

There is also a cost saving here, as both of the Edge of the Earth expansions will cost $100, while the old model would have cost $120. This seems like a win all around. Gamers can get the entire cycle upfront for cheaper, and not have to worry about delayed releases, hunting down missing packs, or understanding an awkward distribution model. And Fantasy Flight Games gets to release it all upfront, and not have to deal with supporting monthly releases (which is anything but simple right now).

You can find out more informant about the contents of both boxes in Fantasy Flight Games’ full news post here.