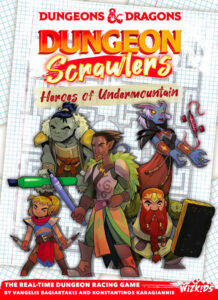 Over the past few years it seems like the Dungeons and Dragons brand has really taken off as an IP. Is it the influence of the first season of Stranger Things (which even spawned its own D&D box set)? Or maybe it’s the success of the Critical Role campaign. Regardless, from quick-playing filler games to straight up dungeon crawls, the D&D brand is alive as ever.

Today, we get to take our dungeon crawling experience to a writing game… specifically a scribbling one. No, this isn’t the 2000th roll and write game to be reviewed on our site. Dungeon Scrawlers: Heroes of the Undermountain is a fast-paced filler game that will have you quickly and franticly trying to collect treasure and slay monsters. In this game, the pen is indeed mightier than the sword.

Dungeon Scrawlers only takes about 10-15 minutes to play. It starts with each player selecting an iconic D&D character (rogue, ranger, wizard, etc…) and a dungeon level. On go, each player takes their pen and tries to quickly trace their way through the maze. The key is that you have to not only draw a continuous line, but you must interact with all the elements of each room you enter.

Interacting with the elements will have you tracing spell shapes, outlining treasure chests, covering up monsters, or collecting artifact fragments in numerical order. There are 10 different dungeons in total, and they do step up in complexity as the numbers progress. While you might just be racing to scribble out an end boss in the first level, the later dungeons will have you collecting keys, teleporting through portals, and freeing prisoners.

After each level is finished, it’s passed to an opponent to score. They check your work and deduct points for going through walls or missing objects you should have interacted with. The player with the most points is the winner.

I came into Dungeon Scrawlers expecting some kind of * and Write game and was pleasantly surprised to not be rolling dice or flipping cards. It’s not that I dislike the roll and write genre, I just think we are long past the saturation point. That being said, Dungeon Scrawlers is a solid filler game that will be good for a few games here and there. It’s definitely not going to be a game you are going to bring to the table repeatedly, as the gameplay is pretty similar from game to game. But as a way to open up a game night (or close one), it works admirably.

I did appreciate how the later levels throw a few curve balls at you to help make things a little more interesting. In addition to more complex mazes, the levels also have limited treasures, time limits, and mini-bosses to battle. It was a nice touch because, after the first level, I was somewhat unimpressed with the game. Dungeon 1 is a nice “training wheels” dungeon, but definitely is not one I’d repeat often.

One issue I had with the game was with the character powers. While I understand there is only so much you can do with a game about scribbling, I wasn’t a big fan of them. They are all kind of variations on the same thing, yet I’m not quite sure if they are all balanced. For example, the rogue and the wizard both let you bypass outlining a shape, yet the rogue only has to touch a treasure to score it, while a wizard has to draw a small circle inside the spell. They are both worth 1vp, so this felt a little odd that one would be somewhat harder than the others.

Other than that, I didn’t have too many complaints with Dungeon Scrawlers. I think this game will probably excel in the family market. While my kids are too young to give this one a go, I could see somewhat older kids having a blast with it. The rules, especially in the early dungeons, are very simple, and real time games seem to appeal much more to the younger crowd.

Dungeon Scrawlers: Heroes of the Undermountain is probably not going to be making anyone’s top 10 of the year lists. It’s a good little filler game that’s best played in small spurts. That being said, it has a great theme and unique gameplay. If you have mid-range kids at home, it could be a hit with them. For D&D fans looking for a quick playing filler game with some decent variety, it’s also worth checking out.

Final Score: 3 Stars – A frantic real-time game that is good for a quick play every now and then.