Board Game Review by::
Jason Kelm 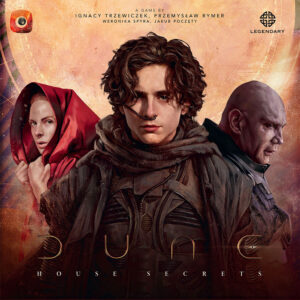 Last summer, Denis Villeneuve, one of my favorite sci-fi directors, released his vision for the “unfilmable” Dune. I had a passing knowledge of this universe and its numerous books, and knew it had seen many adaptations throughout the years. I consumed the audiobook before seeing the film and, for my money, the director did a fantastic job adapting half of the first book. I can’t wait for part two. Despite the weird time of release—we were all still adapting to going back to the movies—it was a successful theatrical release nonetheless.

During this time, a number of “Dune” games were being released. While some thought this was overkill, fans of the IP now had a number of games to pick from. Portal Games was one of those publishers, bringing us Dune: House Secrets. It plays 1-4 players and each chapter, of which there are four, takes 60-90 minutes to play.

In Dune: House Secrets, you’ll play characters of different tribes and factions within the Dune universe, coalescing a resistance against House Harkonnen as they flex their power on the desert planet of Arrakis. Utilizing the Detective game system, players will work together in this first game of a planned trilogy, to uncover a mystery. The experience provides familiar aspects from other Detective-imbued games, including a story deck that provides your narrative, tokens to help complicate story decisions, a website for accessing information and logging end-chapter conclusions, and maps.

There are some new elements to the game as well. You’ll earn experience points, which are used to upgrade your characters and provide more tokens later in the game. Tokens will have to be used wisely as you progress through the game, as they carry over between chapters and aren’t automatically refreshed each chapter like in Vienna Connection, another Detective experience. Tied to earning XP and further complicating story decisions is the game’s inclusion of Consequence tokens. If you wish to access story cards that have Consequence tokens, you’ll push your luck drawing from its token pool and risk impacting the XP you earn in that chapter. It’s a little different from using your available character tokens and adds some tension to an otherwise straightforward story choice.

Dune: House Secrets makes some assumptions about your exposure to Frank Herbert’s sci-fi world. It’s a densely-written universe with a menagerie of characters, dynamic motivations, and futuristic gadgets. Think Games of Thrones-level interconnections. While it’s incredibly satisfying for the viewer or reader who fancies intricate stories, with it comes a new lexicon. House Secrets makes use of this new vocabulary and assumes you have either read Dune or at the very least seen any number of the previous TV/film adaptations. Because appreciation for and exposure to the IP is so helpful, the game becomes less accessible and harder to recommend to the general fan of this genre. There isn’t an included dictionary to reference foreign words or turn phrases, so if you aren’t already familiar, you’ll be hunting down the meanings and spending time getting sidetracked, possibly down other logic paths the game isn’t leading you down.

Every Detective game benefited from note-taking. That’s what a good detective does, right? Setting aside all the information that’s been learned and reviewing the unfolded story before beginning the next chapter is needed with Dune: House Secrets. There will be a bevy of locations and characters you’ll meet along the story’s path, many with not-so-memorable names and relationships. If life gets in the way and you aren’t able to play this game straight through without weeks or months going by, which was the case for me, you’re going to be utterly lost and feel like you need to start over. If you’re playing by yourself, who’s going to give you the recap? While I didn’t mind taking notes, some may not enjoy this secretarial aspect of the experience, even if it does help make sense of the learned information.

Dune: House Secrets is another Detective experience I think is best played alone and likely will only be played through once. While referring to it as a game is a bit liberal, it’s primarily a “choose your own adventure” experience. There’s lots of reading and choosing which narrative path to take. While I didn’t mind this from Dune, I was curious about what other people thought. In the interest of this curiosity, I committed the cardinal Internet sin of reading comments, specifically the BGG rating comments, to find out. According to the number of 1 ratings I found, this was a huge complaint. That kind of surprised me.

Vienna Connection has a much better rating and I felt the experience was similar by comparison. Sure, it had more puzzles and maybe that made it more engaging. But both lacked a certain amount of player autonomy outside of solo play. Whichever character you decide to “play” as, you aren’t taking turns or doing any of the typical things you’d assume in playing a game. Your character’s contribution is a certain token color for story decisions. A player’s contribution may only be to a group vote on which card to explore next, or reading a card. I can’t imagine this is an entertaining experience in a group setting.

As House Secrets is mainly a singular story, despite the various paths you can choose along the way, it’s unlikely to be played more than once. Outside of wanting to know what information undiscovered cards contained, I can’t imagine that’d be enough for someone to play through a second time. Heck, if you really wanted to know, you’d probably just thumb through the deck after playing. There are two options for playing that game presented to you upon setup, so the possibility is there for someone to get the most from their purchase. But these changes mostly affect how your XP is impacted and doesn’t change the story in any meaningful way. Speaking of XP, the game does have stickers you’re supposed to peel off and apply to your player boards when you’ve chosen to upgrade them. But I think savvy enough players will simply track this on their own, especially if you’ll be passing the game on after you finish.

Dune: House Secrets has been an interesting game to play, one that has had more caveats than I expected and will influence who will find this worth their time. If you’re a fan of Dune and enjoy reading, this is a fine one to play by yourself. Otherwise, this isn’t as accessible as other Detective games or an enjoyable experience if you’re unfamiliar with Dune and playing in a group. The one interesting aspect to Dune: House Secrets was the Consequence pool. It provided some unknown and risk, and I do hope they find ways to integrate this into future Detective games. But these are few and far between and aren’t enough to elevate the experience beyond being just a fine game, or rather, a narrative experience.

Misses:
• A lack of replay value, it’s a narrative experience unlikely to be played twice, despite the offering of a second way to play
• Being unfamiliar with Dune limits accessibility, no included reference for words/turn phrase
• Those looking for more of a “game” experience will be disappointed by the lack thereof