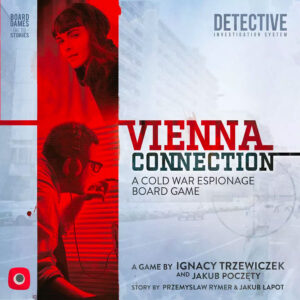 It’s 1970’s Europe and there’s been a murder (“A murder you say”, in that Michael Scott voice). As you sit down with the bigwigs of the CIA, you learn that this murdered individual had a sort of code card on him, but you don’t know what it is or why he had it, much less who’s hand killed him. With a small team being sent into Vienna to start the investigation, you’ll be tasked with unraveling this tangled web of whodunnit.

Vienna Connection, designed by Ignacy Trzewiczek and Jakub Poczęty, and published by Portal Games, asks, do you accept this mission? This review will self-destruct in five seconds.

Vienna Connection takes the Detective game system (yep, it’s a system now) and presents what I feel is a more streamlined experience. Without getting into a deep comparison, there is no longer a board where tokens are manipulated on it. Instead, there’s a single sheet for each mission. While conducting your investigation, you’ll check off boxes in different zones, signifying the different types of exposure you take depending on your story choices. But if you want to investigate a zone you have filled up, there’s a Man in Black section, which acts as an overflow and lets you know your investigation is wrapping up.

Moving you through Cold War Europe is a story deck that paints the setting and progresses your story. There are four missions in total and at the start of each, you have some information to start with, such as leads to follow up on, maps, and files. Throughout the game, you will have to break codes and gather puzzle pieces that give you access to more leads and act as a sort of progression for your investigation. Once you conclude your investigation, you will file a Final Report. This takes place, rather unobtrusively, in an app, which gives instructions of things to write down for later missions. You also will make two choices from a list of further actions, based on the intel you gathered. This also gives a sort of conclusion to the mission and possible impacts on the missions to come.

I have to admit to you that this is the first and only Detective game I have played so far. I wasn’t entirely sure what I signed myself up for, but the theme was very enticing and I’ve always been a fan of the spy genre. But if what I experienced over the twelve hours or so it took me to get through all the missions is what can be expected, then consider me very interested.

To distill the game down to a “choose your own adventure” category would rob it of what it does well. It engages you in a Cold War- and espionage-inspired narrative that makes you feel like you’re in that setting. Many games aspire to give you a level of storytelling on par with a roleplaying campaign or even a book or movie, often to fail at hitting this high mark. While I don’t want to comment on the ending, the overall story kept me engaged and I appreciated how aspects weaved into other missions. It was long enough that someone who buys it can feel they got their money’s worth, but short enough that you could actually finish the whole campaign.

As with most games and stories like this, it’s doubtful that it’ll get played through more than once, or at least until the story fades from one’s mind. While I understand that might be disappointing for some, please hear me that the experience is worth it. I don’t typically relish sitting down to play games for much past two hours. But Vienna Connection was a notable exception. I highly recommend taking your time and soaking in each story piece. Rushing through would just rob the experience and your investigation is rewarded for being methodical. Additionally, while there are only four missions, each of them is somewhat unique in its approach. I think that will really appeal to people who don’t want a rinse and repeat experience.

Supposing you want to take your time or even play this by yourself as I did, but your night doesn’t allow for a 2-hour session. That’s okay. Since there aren’t many pieces to set up, getting going and putting it away for the night will take you all of five minutes. I actually did this on the first mission and because all of my learned information was on files and cards, I could easily pull them aside once I got back to Vienna. All of these aspects influenced what I felt was a genuinely enjoyable solo experience.

While investigating through making what boils down to story choices is entertaining on its own, I found the different kinds of puzzles and ciphers spread throughout the most engaging. Solving these opened up both further mission options and directions, but also helped fill in what you were able to piece together for the mission, directly impacting what you’ll experience in the following missions.

I really enjoyed that some of these puzzles weren’t going to get solved in one mission alone. You might get one number here or two letters there. It felt really good that by the end of the third mission, I had solved one of these. These really helped to get my thought process focused and, in a sort of way, in character. Now folks may find themselves getting stuck or just not wanting to spend the time on these puzzles. For those, there is an easy way to look up the solutions within the app. I think this is a great way to handle this. Had there been cards for such an occasion, I think they would have increased the chance of accidentally spoiling the game.

Overall, I really enjoyed my experience with Vienna Connection. I didn’t find much to gripe about really, and that honestly makes my job easier. While these next points aren’t negatives, they’re still worth knowing. Since the designer assumed owners of the game would play it at most two times, which is generous in its estimation, they decided to include only two copies of each mission’s sheets. While I get it, it also presents a difficulty for those who might want to sell their copies after they’re done.

But I have a solution: laminate them. I did because I have a laminator and it’ll be easier to sell or trade off with a few more sheets available for the next person. As for the rulebook, I wish it had been laid out just a bit better. This is obviously not an overly complex game, so you’ll get there easy enough. But this is a personal gripe with me, having me jump pages for information when you’re presenting it early in the book. Just say your piece and continue on with the rules.

Vienna Connection was a really enjoyable experience. Sitting back at the end of the game, I was honestly surprised that a game would keep my attention that well, that I wanted to continue unraveling the story to see what would happen. If you’ve fancied yourself as having the mind of a great detective, then you absolutely should try Vienna Connection. Take your time and enjoy the experience. You’ll be glad you did.

Neutral:
• Probably a once and done experience, but you’ll get ample play time
• There are only two copies of each mission sheet
• Rulebook could have been a little bit more organized