We review Destinies, a competitive exploration and adventure game published by Lucky Duck Games. Destinies is an app assisted game that will have players exploring the world to be the first to fulfill their destiny. 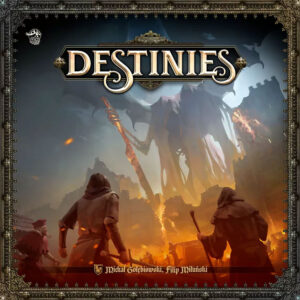 Sometimes I think John Lennon was right when he said, “There’s nowhere you can be that isn’t where you’re meant to be.” Other times, I’m stepping into a burning field filled with a swarm of vicious rats while attempting to fulfill my ultimate destiny, and wonder if I wasn’t meant to be investigating in the other direction. And that maybe it’s Lennon’s fault I’m in this mess.

Destinies is a competitive adventure game from publisher Lucky Duck Games and designed by Michal Golebiowski and Filip Milunski. It utilizes the Scan&Play technology (re: QR codes) found in games like Chronicles of Crime and tasks players with exploring an ever-changing fantasy game state. This world is story-centric and supported by an app that displays dynamic events and remembers every choice you make. The good and the bad.

The base game of Destinies comes with an introductory scenario and a loosely linked four-part campaign. It plays from one to three players and each game typically lasts two hours. There’s also a solo option included that allows players to choose between a Challenger mode (with time pressure) or Explorer mode (for a relaxed approach).

Each scenario asks players to choose from a variety of characters. Character cards have two unique destiny options listed on the back which are kept secret from other players. These objectives are the only hidden information and provide fuel for progress. Players are free to decide which destiny to fulfill and can switch between the two at any time. Players will work toward a destiny finale and the first to complete this is the winner.

The digital app begins the scenario by instructing players to place map tiles and personal miniatures onto the table to initiate the construction of the world. Typically, one tile starts face up with points of interest tokens (and sometimes non-playable characters) and adjacent tiles will be face down until players travel to them.

Each character begins with two large main dice and three exhausted effort dice, one coin, a special starting item, and a skill loadout represented by several tokens on three different tracks: intelligence, dexterity, and power. These tracks span from one to twelve (the lower the better) and will represent the character’s ability to overcome challenges throughout the session.

Turns are played in three phases. First, a player can refresh one of their effort dice. Second, a player can choose to move up to two tiles away, but as soon as they enter an unexplored tile, they must stop movement. A map tile is selected in the app, which will then display new points of interest, additional areas of exploration, and possible characters to interact with. Finally, a player can choose to select one of these new possibilities.

Visiting points of interest is the meat of the game, as it will provide further stories to enhance the world. This may give players options to test skills (breaking down a locked door), speak to a blacksmith (or shop their wares), or obtain new items by climbing trees or stealing from a coffer while no one is looking. The selections made during these interactions may change the state of the world, from a character suddenly leaving the map to players losing items or growing stronger.

Skill tests will provide successes after rolling the available dice. Each roll is compared to the appropriate skill track on the player board. Successes may provide experience, new equipment, or pathways to fulfill a destiny goal. Each test has a hidden difficulty, ranging from easy to epic, that must be inferred by the threat.

Once players have fulfilled the initial steps of their chosen destiny, they will be prompted to begin their finale, which can lead to challenging choices that span several turns. Due to this, other players are still in the running to complete their destinies if they can catch up in time. There’s never a clear end in sight, and as such, players must continue to pursue their destiny in the hopes of crossing the finish line first.

Relative to the many adventure and dungeon-crawling games available, Destinies provides a lot in its small box. There are 150 item cards, 67 map tiles, 31 miniatures, high quality player boards, and plenty of dice and tokens. The production is good, even if many of the miniatures are a too small and the card stock is passable, and this provides a great entry point into the Destinies system. Add to this the free app that acts as a dungeon master and it seems like Lucky Duck Games has set themselves up for longevity with more expansion content to come.

Destinies does certain things well. My favorite mechanism is the skill system. Players are given full agency over how many dice they plan to roll for a skill test, as well as which skills they’d like to upgrade with the experience gained. In one scenario, I played as a nun who was incredibly powerful as I’d chosen to lower her skill track in this area to increase my successes for fighting and breaking down doors. This game allows for these types of against-type roles with its decision space, and it can make exploration unique.

The app interface is pretty slick and does an excellent job of parsing choices and keeping the story moving. The narrative it presents is nothing groundbreaking. If you’ve been the “chosen one” before, you know what to expect here. But the moral choices and outcomes give each encounter uncertainty. Not every conversation is exciting though. There are plenty of times where scanning a card will provide the same scripted answer from multiple sources, which speaks to a lack of focus on outcome development.

That said, the app design almost makes the map tiles and the miniatures redundant. During our plays, we constantly forgot to move our characters on the physical map because they were moving in the app. The app also added relevant miniatures to the map, so plucking them out of the box to set on a tile seemed unnecessary. It feels like one of the few reasons the map tiles exist is to allow players to remember where items have been dropped. Additional steps could’ve been taken to minimize the game’s footprint even further by being more app focused.

As such, Destinies can feel more like a hybrid video/card game. It’s satisfying to discover new item cards and then decide on which cards to add to your inventory. Determining which card will help most as you explore can be a difficult decision. The QR tech allows players to seek answers about their destiny throughout the land, inquire about an item’s usefulness, or brandish a weapon against an enemy. It does tend to pull you out of the moment as you wait for the camera to focus on the code, but there’s something to be said about wielding a crucifix against a demon as the QR scan banishes the fiend.

The area of Destinies that doesn’t work as well is the competitive design. Rather than exploring the world together, players are off on their own learning about the land to fulfill their destiny first. But while player A is learning about a new location from the innkeeper, player B can listen to this information while on a completely different map tile and then take advantage of it on their turn if they’d like. Thematically it doesn’t make much sense, even if it does diversify the information you can gather at a given moment.

This competitive design can add inconsistent tension when both players are closing in on their finale. I played multiple scenarios where one player could win on the next turn, only to be thwarted by a poor roll or a wrong decision. Excitement existed here, but also frustration. I’ve also endured scenarios where a player was nowhere near completion of their goals due to bad luck. Those that fail a scenario are left with unfulfilled stories and there’s not much to celebrate their effort at the conclusion.

And that’s the ultimate rub with the Destinies system. A self-contained world is being explored, but only a portion of the story is being told. Players are unable to discuss their motivations, instead trying to keep them hidden while the app broadcasts (in an indirect way) what they’re seeking. Add to this the fact that destinies can overlap to some degree and it becomes a race for finding certain resources rather than immersion into the story. This brings a lot of frustration to the table when the path forward isn’t clear for one player, while other players are swiftly closing in on their finales.

The system also doesn’t provide enough incentive to return to each scenario. If you’re playing with three players, you’re already getting a sense of each character’s path forward and returning to a scenario again later with a new group provides a leg up to any who’ve already played it. I returned to a scenario in a solo play and found that the story evolved similarly the second time around. Thus, the one-and-done nature makes the choice to buy-in much murkier as it will require plenty of expansion content to match the depths of other open world adventure games on the market.

Destinies provides a lot in its small package. The app-supported storytelling should support plenty of future content and keep this system online for quite some time. As is the nature of the beast, there is not much reason to return to each story after you’ve progressed, so it’s nice that they’ve made this a compact box of components that requires very little setup. Unfortunately, the competitive design in Destinies can leave players without closure for their character’s story. This setting also has trouble due to its inability to keep information secret, creating a world that expands for competitors with no thematic basis for how this information is dispersed.

Final Score:  2.5 Stars – An inventive Scan&Play tech approach to fantasy exploration that falls short due to short-lived gameplay, redundant components, and a competitive angle that keeps immersion at arm’s length.