Home Board Game News Descent: Legends of the Dark Releasing in 2021 from Fantasy Flight Games

Yesterday during Essen Digital, Fantasy Flight Games finally announced the long-rumored new Descent board game. This is the same one that was teased at the very end of their In-Flight Report during Gen Con Online this summer.

Descent: Legends of the Dark is not the third edition of Descent: Journeys in the Dark, or even compatible with the existing version. This is a brand new dungeon crawler, that may share a theme and some mechanics with its predecessor but is a wholly new experience.

Descent: Legends of the Dark will be an app-driven, cooperative campaign-style game. This first box, clocking in with a shocking $175 MRSP, and will feature 16 missions for heroes to embark upon throughout the world of Terrinoth. This first campaign is titled Blood and Flame, with Act 2 and Act 3 releasing in a similar-sized box sometime in the future for an undisclosed price. 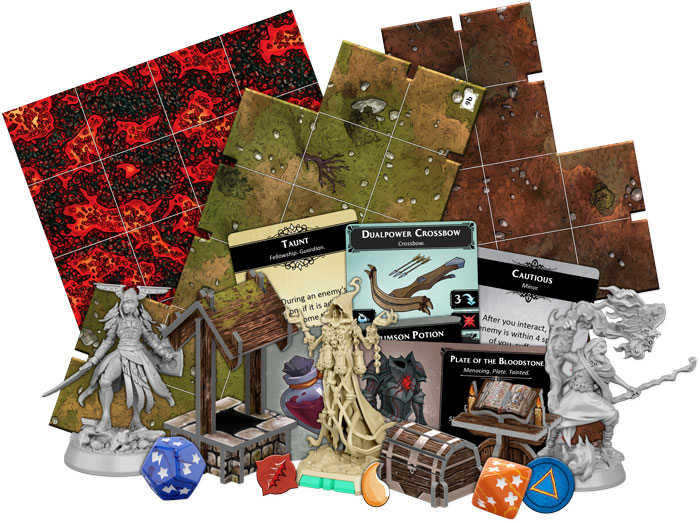 This box will include 40 miniatures and 40+ pieces of 3d terrain (made out of punchboard) that the heroes will be interacting with during their quests. 6 of the miniatures will be heroes for the players to control, while the other 34 are broken up into 11 different monster types (of which one seems to be a large boss type).

Fantasy Flight Games describes the gameplay in this new version as fast and intuitive:

“You’ll take three actions on every turn—one maneuver action and two additional actions of your choice! Maneuvering gives you movement points, as shown in the upper right corner of the character sheet, and since you always have a maneuver action, you’ll always be able to reposition and put yourself in a more advantageous position for attack. Other than maneuvering, you can use an action to attack an enemy, rolling your attack dice and drawing upon your hero’s abilities and weapons to deal maximum damage or inflict harmful conditions on your foes. Or, you may use the explore action to interact with a piece of 3D terrain or a token by using the app. You can also use your action to perform one of the most crucial actions in Legends of the Dark: the ready action.” 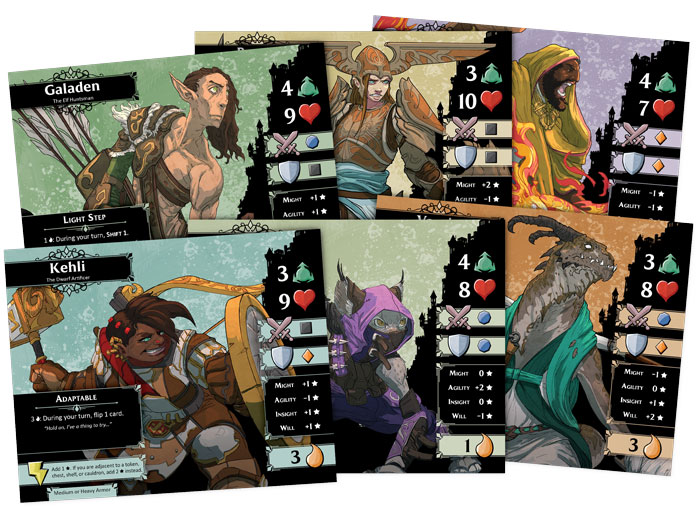 This version features new art—much different than previous descent games—which definitely has a unique style to it. Personally, I’m not a fan of it and much preferred the previous style. The helmet along on Brynn feels ridiculous. But art is subjective, so your mileage may vary here.

The game follows in the footsteps of other FFG games, such as Mansions of Madness or Lord of the Rings: Journeys into Middle Earth, by being full app driven. The game “is built on a fully integrated companion app, which governs everything from activating enemies, to building an unfolding scenario, to opening the door for activities like crafting and shopping between quests.”

In my opinion, FFG has greatly improved the quality of its app integrated games since the early offerings. While I found the original Descent app to somewhat lackluster, both Mansions of Madness and Lord of the Rings were excellent. So this bodes well for the quality of Legends of the Dark.

Descent: Legends of the Dark, planned for the second quarter of 2021. You can find out more details on the gameplay on Fantasy Flight Game’s website.