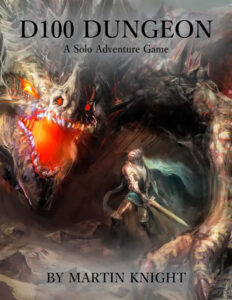 It seems like one of the white whales of our hobby is to make a board game that can replicate the RPG experience without actually playing a tabletop RPG. Many games have tried to create Dungeons and Dragons as a board game, but sadly, all have failed. Sure, you’ve got some great dungeon crawlers out there (Descent: Legends of the Dark, Deep Madness), but those are really just combat-based exploration games. And then you have games going the other direction, really focusing on the narrative (Legacy of Dragonholt), but end up feeling more like a story in a box. As a long-time RPG player, I can tell you, it’s just not going to happen (it’s so Fetch).

But that doesn’t mean that games can’t be inspired by old-school, tabletop RPGs. And that’s what we going to talk about today. D100 Dungeon is a solo, self-published game from Martin Knight that seeks to give you an old-school DnD experience with just a pad of paper and some dice. Is your nostalgia ready?

D100 Dungeon ships with just a single 70-page hard-bound book (or PDF if you opt for the digital version). Contained within is just about everything you need to play the game. Like any good RPG, the first step is character creation, which is something I’ve always enjoyed. Your choices are standard fantasy classes: Warrior, Rogue, or Sorcerer. For my character, I created a stout Dwarven Warrior with a trusty Warhammer.

When you have your character ready to go, the game sets you off on five sequential training quests. These, while a bit grindy, will help you build your character up before setting you loose on random quests that can throw some truly nasty monsters at you.

A standard round takes place over four phases. First, you tick off a box on the time tracker, which could see you spending oil for your lamp, eating a meal, or fighting a random monster. After that, the d100 (2 ten-sided dice) are rolled to see what room you enter. There are four possibilities—empty, monster-infested, geographical (pit, bridge, cave in, etc…) or quest-related.

If it’s a room with a monster, you get to fight! All told there are 100 different monsters to encounter ranging from Giant Bats to Ogres to Green Dragons. Fight rounds are broken up into a series of turns, with you attacking the monster and the monster attacking back. You will handle rolls for both parties with several variables affecting how much damage is taken. For any skill check or attack, you want to roll low. For example: if your attack rating is a 65, you need to roll under that to hit. If you happen to roll 10 or less, then you earn an experience point for whatever skill you were just using.

For defense, your body has 10 different armor slots to equip all the different pieces you can wear. When you are first starting out, you are definitely going to look like a broke adventure with hand-me-down helmets, mismatched arm bracers, and a blood-stained cloak. But killing monsters rewards you with loot. Random armor, weapons, consumables, spells, or monster parts. You will also get a chance to go shopping in between quests.

After a room is resolved (be it a fight or geological encounter), you can make a search roll to see if there is anything cool in there. You might find a useful item, secret passage, or even a lurking monster.

Once you’ve achieved your quest goals—some of the early ones will have you finding a monster part or looting weapons—you can head back to town to heal, visit the merchant, and even invest some of your gold in ventures.

I’ve played every version of Dungeons and Dragons from the 1st edition black box with the red dragon on the cover up through 5th edition. And I’ve gotta say, D100 Dungeon definitely evokes that old-school D&D feel. Sure, there is no DM crafting a narrative for you, it’s still a straight-up dungeon crawl, but you can tell that a lot of thought and love went into this game. From the charts to the granular nature of the armor, to the hand drawn mapping, it’s evoking fond memories of playing 1st edition in my friend’s basement.

Even though the book clocks in at 70 pages, at least half of the book is composed of the many tables you’ll need in the game. And that’s one thing to know about this game. You’ll be rolling a LOT—both on these tables and in combat. If that kind of thing bothers you, then you best move on right now. But I actually enjoyed it. I think it helps that the tables are so deep. Most have at least 100 entries, so you are rarely rolling the same thing repeatedly.

Combat is one of the focuses of the game and Martin Knight did a great job of creating a system that’s both streamlined, yet still interesting. For your attack, you roll to see if you hit, and then roll for damage and the hit location. So, if you hit a monster in their foot, you are going to do less damage than a head shot. On the same token, monsters attacking you will also have a hit location, and this is where your armor comes in. If you get hit in the head and have a nice steel helmet on, that will absorb some of the damage. Yet if you get tagged in the foot, that leather boot isn’t going to protect you very much.

That’s also where one of the downsides of the game is. D100 can be somewhat swingy and there isn’t very much in the way of luck mitigation. If you roll really poorly on your attacks, and the monster rolls well, you are going to be a bloody mess and there isn’t much you can do about that. D100 can be unforgiving at times and it’s not ashamed of it. The early quests thankfully make sure you don’t get thrown at a dragon right away, but once the training wheels come off, you better be prepared. Best to bring along several health potions and plan on a hasty retreat if things go south.

A lot of your enjoyment for D100 Dungeon might also come down to personal preferences. Every room will need to be hand mapped as you go. There is also a decent amount of bookkeeping involved. You have a monster log that tracks all your kills, so you know when you get some bonus XP. A lot of this reminds me of playing 1st and 2nd edition DnD, so I was right at home here. But if your only RPG experience is with Skyrim or Gloomhaven, then this could be quite a jarring experience for you.

Finally, there is a lot of extra support for this game in the way of expansions. On the website, you can already buy a half-dozen expansion books, a digital companion, and even mapping tiles. The mapping game add-on is probably the most interesting to me, as I wasn’t that enthused with drawing maps on a grid (I always handed that job off to someone else in my DnD party). But I’m definitely curious as to how some of the expansions integrate with the game.

For a solo board game that you can play with just a book, a few sheets of paper, and 3 dice, D100 Dungeon is truly an amazing piece of work. While there are some 20 pages of rules to read through, most are explanations of key terms or examples. The rules are actually pretty streamlined and after a few quests, you probably won’t need to reference the rulebook all that much. I will say that if you get the printed book, you will also probably want the PDF. Being able to jump directly to tables in the PDF via bookmarks is a lifesaver vs flipping back and forth in the printed book.

If you are looking for a dungeon crawler that will have you harking back to your days of drinking Ecto Cooler while you hacked and slashed, you’ve got it here. While there really isn’t much in the way of a narrative here, the character progression system is second to none (and really the central focus of the game). If you like the idea of creating a DnD character and taking them on quests, you can play this one for hours and hours on end with plenty to enjoy.

Final Score: 4.5 Stars – A dungeon crawler experience that evokes the old-school Dungeons and Dragons feel with every ounce of its game.

Misses:
• Not much in the way of luck mitigation
• You’ll need to supply your own narrative