Board Game Review by: :
Richard Pain

We review Deep Madness, a Lovecraftian horror board game published by Awaken Realms. In Deep Madness, players must work together to survive in the depths of the ocean. 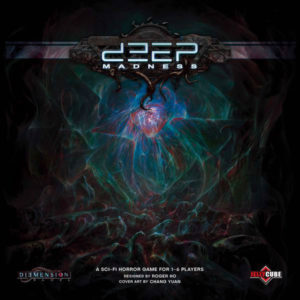 When I was a teenager, certain horror movies burnt indelible marks in my memories. Some of them thrilling, like Aliens and The Abyss. Some of them horrific like Event Horizon and Hellraiser.

So when a new game appeared on Kickstarter, clearly inspired by my favorite movies, I quickly laid down my cash, anticipating the day the game would arrive like a kid waiting for Christmas.

Deep Madness is a cooperative horror survival board game that pitches 1–6 players against hordes of Lovecraftian monsters, set in the underwater research facility of Kadath. Together, the players must sprint through flooded corridors in a race against time to reach objectives before the monsters, or madness itself overwhelms them.

Deep Madness is made up of chapters, each with their own challenging objectives and game setup. After choosing which chapter to play and which investigators to play as, the map is set up accordingly and the introductory narrative is read or spoken aloud.

At the beginning of each turn, a timeline referred to as the “devoured track” advances, which can trigger a variety of negative effects. Most commonly this involves one room on the board being “devoured”, which represents a creeping fleshy mass overtaking and transforming said room. When this occurs, the room tile is flipped over, revealing a corrupted version of the original artwork. A monster spawn marker then appears, followed by legions of horrible monsters.

Turns alternate between the investigators and the monsters until every piece on the board has been activated, then a new turn begins.

Each investigator can complete three actions per turn, allowing them to move, attack, lock doors, search for useful items and so on.

Each investigator also has a sanity rating, usually three, which can be used to pay for rerolls and other effects as needed. Once the maximum amount of sanity has been expended, investigators need to use a “rest” action to recover their spent sanity.

When monsters are defeated, spent sanity tokens are turned into madness tokens and once an investigator acquires three of these, the tokens are removed and a madness card is drawn. This represents the investigator losing their mind and incurs a negative effect. However if monsters are defeated and an investigator has not used any sanity tokens, or possibly because they recently rested, they instead draw a consciousness card, which bestows a positive effect. Through this clever mechanic, players have to make difficult decisions about whether or not to spend their sanity and risk incurring madness cards later on.

The monsters each have their own “AI” which is displayed on their corresponding card. This usually involves shambling towards the investigators and attacking them, but each monster type has its own unique behavior – more on that later.

Over the course of the game, the advancing devoured track represents time running out, and quickly fills the board with more monsters than the investigators can ever hope of fighting. The game ends when either one of the investigators dies, time runs out, or the team successfully completes the objective.

Deep Madness is a complicated, challenging, yet thrilling game. Once set up, the gruesome monsters, detailed room tiles and evocative narrative effectively immerse players in the experience.

This dark sci-fi theme is brilliantly brought to life by the 150+ nightmarish miniatures that accompany the core game. Writhing tentacles, shambling husks, and slithering putrids, every gruesome model is a work of art. The epic monsters, in particular, are a triumph of the imagination, albeit a very twisted one. For model painting and wargaming enthusiasts, the quantity and quality of the miniatures that come with Deep Madness make it an attractive purchase in its own right, even without the game.

That said, however, the complexity of the rules and quantity of tokens are overwhelming at first. Monster spawning phases can be drawn out if players are unfamiliar with the process – detracting from the flow of the game.

Deep Madness is also extremely difficult. As the board quickly fills with models, every player has a “we’re screwed” moment. This can be frustrating for players who are used to running around blasting monsters like in a computer game. Yet this extreme difficulty forces players to rethink what they could have done differently, leading players to treat each chapter as a puzzle that needs careful planning, and some luck, to solve and succeed.

As the investigators kill monsters, and madness or consciousness cards are activated, the short narrative that accompanies each card adds extra flavor to the already horrific theme.

The behavior of the monsters is varied and interesting too. Husks, for example, move slowly and are tough to kill, but spawn fast-moving cockroach-like “Mind Eaters” which race toward the investigators. Slug-like Putrids slither slowly and attempt to dissolve the investigators and their hard found equipment. Then you have the Blinds, which wander, not directly towards the players themselves, but towards their line of sight. Once in view, a Blind will live up to their namesake and blind the characters, weakening them temporarily. This leads to interesting gameplay where the players lock doors behind them to hide from the Blinds and reroute them.

Flooded room tiles cause the investigators to lose oxygen, eventually incurring damage and later, instant death, adding an even greater sense of danger in affected areas. These spaces are usually represented with small blue tokens, but in playing, I felt these inadequately represented water and mostly added to the clutter of tokens already on the board. My solution was to purchase some blue plastic slip folders from a stationary store and cut them to size. The room graphics are still visible through the blue plastic and it makes the flooded areas immediately identifiable.

One problem when playing are the devoured tokens which litter the board and incur negative effects on investigators ending their turn on the same space. Whilst these exist to increase the difficulty and add randomness, they clutter the board and confuse new players. Perhaps worst of all, they are difficult to read because they blend in with the graphics on the room tiles. Having played Deep Madness eight times now, I’ve chosen to remove them for the sake of simplicity (yes I know it’s technically cheating) but the game remains difficult even without them!

Fantastic production quality with hordes of evocative minis, detailed room tiles, and engaging narrative. The scenarios are fiendishly difficult though and given the time commitment and complexity, Deep Madness risks off-putting casual gamers or dissatisfying competitive types who expect to win on their first, second or even third attempt. However, for those willing to strategize and work together, Deep Madness is an exciting, thematic challenge that will keep you coming back for more.

Note: Deep Madness recently launched a second campaign on Kickstarter. This campaign has unveiled a wide range of new expansions and impressive miniatures. Be prepared to wait months for delivery though, as is normal with Kickstarter board games.

About the Author: Richard is a tabletop gaming addict based in Singapore. He started off hooked on Hero Quest, a.k.a. the gateway drug, which later developed into a full-on Warhammer addiction. Board games are his methadone, with small games like Onitama, Carcassonne and Pass the Pigs, filling the days between big hits of Scythe, Game of Thrones and Deep Madness.