We review Cthulhu Wars: The Ancients expansion for the asymmetrical, area control game board game Cthulhu Wars. The Ancients do not worship a Great Old One and they construct Cathedrals to increase their power and influence. 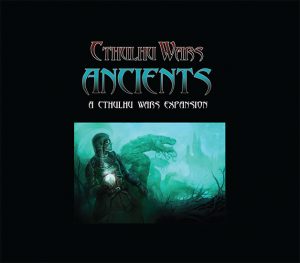 If you saw the BGQ Top 10 Cthulhu Board Games, then it should not be surprising to know how much I love Cthulhu Wars. This asymmetrical, area control game is epic in size and theme. You control a Great Old One faction and try to defeat others for world domination. Since its release, Petersen Games have given fans numerous expansions for maps, Independent Great Old Ones, and other Great Old One factions.

This brings us to the latest expansion, Cthulhu Wars: The Ancients. The Ancients are a human faction that emerges from the underground cavern of K’ N-Yan. Do not be fooled; they are not “the good guys.” They want to spread their decadent ways and take control of the world as well. What separates them from other factions is that The Ancients do not worship a Great Old One and they construct Cathedrals to increase their power and influence.

Let’s take a look at what The Ancients adds to the Cthulhu Wars catalog and see if it’s worth adding to your gaming collection.

The Ancients expansion is drastically different from the base and previous factions in that they are not supported by a Great Old One and they gain power and most spells by creating Cathedrals.

The Ancients comes with set-up rules for the base and all current expansion maps. This is key since a player along with using the set-up rules can decide where The Ancients begin. They have no fixed starting location for any map.

There are no base rules changes with this faction except an addition. The Ancients gives the player the option to create a Cathedral during the Create Gate Action. Cathedrals are indestructible once built and the only player that can remove them from play is The Ancients player.

Most of The Ancients spells give significant power savings for Summoning Monster and Terror Units. It’s important to note that, like other factions, The Ancients still do have to create Gates to summon their units.

I’m going to admit that for the most part, I’m a completionist when it comes to my board game collection. If I have the base game, then I typically want all expansions, promos, etc. That said, Cthulhu Wars is probably the exception because there’s so much available. From the multiple Kickstarters and what I’ve bought and traded for, I now think I have what I will use for Cthulhu Wars going forward. Then Petersen Games releases The Ancients, and I can say that I was at first skeptical, but I absolutely love this expansion/faction and it’s being added as part of my Cthulhu Wars collection.

My first play with The Ancients was really not great mainly because of my poor choice of starting area. The starting location is key to using this faction to its full potential. You will need to build Cathedrals on specific map Glyph areas, and in one case none, to gain your spells; so be smart about where you start.

If your starting area is not ideal, a great balancing factor with The Ancients is their Unique Ability: Dematerialization. This is essentially teleporting for units being able to move from one area to another anywhere on the map. Now, this ability only occurs during the Doom Phase, but it’s still a great plus to get to those key Glyph areas to build Cathedrals and/or set up your next turn. Plus it keeps other players on their toes.

Once the Cathedrals are out, they cannot be removed from the game except by The Ancients player. This can frustrate other players, but they can also gain power bonuses if they control or build on a Cathedral area and if the right spell is in effect. So, in some cases it’s a win, win for all. Once all 4 Cathedrals are out The Ancient Player can summon an IGOO and, depending on the spell in effect, gain additional Elder Signs during a Ritual of Annihilation or eliminate a Great Old One from a Battle Area. All are huge advantages for The Ancients player.

In my opinion, the most significant advantage with The Ancients is the power savings that spells will grant. This allows The Ancients player to Summon units like Un-Men at no cost, the Reanimated and Yothan at significantly less than the starting cost. The Ancients player will then be able to use the extra power to take additional move actions, fight, or create more Gates/Cathedrals. This will have The Ancients player jumping out ahead on the Map and Doom Track early. But this will place a target on them and this is where not having a Great Old One hurts The Ancients longevity.

I know most are thinking “no starting Great Old One – forget The Ancients” but with all the advantages listed above and thematically, it makes sense. This really is an excellent way to balance this faction otherwise they would be overpowered. Now, I’m not going to call the lack of Great Old One a negative but rather that this expansion assumes you own or should own an IGOO expansion. If you’re a completionist like me or already own an IGOO expansion then no worries; get The Ancients. If you don’t own an IGOO then purchasing The Ancients would likely lead to another purchase and that’s something that can turn people off.

I can say with confidence that The Ancients are my favorite faction to date. Their unique ability, Cathedrals, and power savings has me reaching for this expansion each time Cthulhu Wars gets to the table. Thematically, I love that there are no Great Old Ones but with all advantages, you unfortunately need some disadvantages as well.

I like the fact that once all 4 Cathedrals are in play, The Ancients player can summon an Independent Great Old One. This helps get some big hitters on the board for this faction. The only miss is that if you don’t already own IGOO expansion and you want The Ancients then you’re somewhat inclined to buy at least one.

If you are a fan of Cthulhu Wars and wants to play a faction that breaks the mold then you’ll want/need to pick up Cthulhu Wars: The Ancients.

Misses:
• Best to own an Independent Great Old One expansion