We review Circle the Wagons, a two player card drafting game published by Buttonshy Games. This publisher specializes in pocket sized games that can easily be taken anywhere on the go and we dive into Circle the Wagons and see if it works. 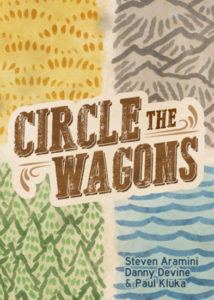 Size matters not as a wizened puppet character once said. This reviewer is a firm believer in the concept that a small game can be a great game. When a publisher sets out to craft a small game, it’s usually with the intention of maximizing portability and convenience for play anywhere. Depending on the scope of the components and play time, the game depth can vary.

Button Shy Games has got a thing for small packages. They’re producing a line of wallet-sized games with themes as varied as gamers could hope for. Each game comes in a faux-leather wallet and usually relies on the placement of cards or other thin components. Playtimes and player counts are also on the low end typically.

Circle the Wagons is one of many offerings in this line. Players take the role of town architects in the pioneer days hoping to outdo their opponent in points by playing landscape cards in configurations to get the most points. As a two-player card drafting game, a single play goes fast in just 15 minutes.

The setup requires all cards in the game. Three are placed in the center of the play area with the card backs (the side with a scoring condition) facing up. The remaining 15 cards are laid out in a circle.

Players then alternate selecting cards from the circle, adding them as they go to their town. Each card added to a 4-square domino-like display creates a plot of land. To gain points, players either need to place similar colored squares next to each other to create groups or follow the instructions of the scoring condition cards in the middle.

As each player selects a card from the circle, if they skip over any cards, those cards go to their opponent. In this manner, players will usually decide between one to three cards. If they skip over too many, they’re likely giving away too many points.

Once all cards are drafted, the game ends and points tallied. Players receive points for the largest group of similar colors connected and the points from the central scoring cards.

Circle the Wagons delivers a great game experience for such a small game. It’s got a couple of pitfalls, but for the playtime and the simplicity, there’s rarely any languishing in a game.

The biggest draw of this title is the variable setup and scoring. Each game plays basically the same, but the scoring cards will be driving players hard from the get-go. The bonus point conditions throw enough wrenches into play that each game feels very different.

Another draw is the mental gymnastics to evaluate each card. Players can often find non-obvious ways to score a card so passing up a card to give to an opponent is an incredibly risky move. This level of tough decision-making is greatly appreciated in this size of a package.

While the game’s playtime is short, there is some significant negative from randomness. Players certainly make choices, but it is possible that players will be left with nothing but weak ones. More than other games, players need to anticipate their opponent’s choices. Thankfully, a two-out-of-three match still hits the expected session length of a filler game.

Circle the Wagons is a fun filler experience for a quick card drafting game. It sets a bar for other wallet games to reach and easily finds its way into any game bag on game night. Gamers who aren’t tired of western themes or microgames will appreciate this pocket of fun.