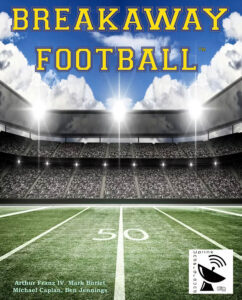 There are a few themes for tabletop games that always immediately pique my interest. Dungeon crawlers, theme park builders, and football (no, I don’t mean soccer). And that’s how the review copy of Breakaway Football ended up on my doorstep. This football simulator apparently was published back in 2017 and falls into the category of “how did I not know this was a thing” games. Well, I’m glad that publisher Uplink Underground reached out to me, because it’s the right time of year for some fun on the gridiron. Many games have tried to replicate my favorite sport on our tabletops, but few have succeeded. Does Breakaway Football have what it takes? Let’s find out.

Breakaway Football is more of an abstract take on a football simulation. Unlike games such as Techno Bowl or Blood Bowl, you won’t be controlling players and moving the ball around on the field. You’ll instead be taking on the role of a coach calling the plays.

I’m not going to explain the intricacies of how a football game is played. Chances are if you are reading this review, you know the rules of football. Instead, let’s talk about how the game simulates aspects of the sport.

When it’s your turn on offense, you start by picking one of your play cards. These range from various running plays, to passes, to more tricky plays like a play-action pass. Once you’ve chosen your card, you put face down. The back of the card has the formation to give your opponent a clue as to what you might be running. Each deck has three formations: run heavy, pass heavy, and balanced. So even if you aren’t up on football terms (I-Form or Ace 2 TE), you still can have a clue of what your opponent might have chosen.

Then your opponent chooses a defense card. Just like the offense card, the back their card will show the formation in the same 3 types as the offense (again, lingo would be 4-3, Nickel, Dime, etc…). At this point, both players can audible and flip their card 180 changing the play to whatever was on the other side of the card (all play cards have two plays, one on the top and one on the bottom).

When both players are ready, the cards are revealed, and the strengths of the plays are compared. Then a game day card is drawn to simulate the randomness of the actual sport of football. If the event on the game day card matches the play type, it’s resolved. These can give bonuses like additional yards, a sack, a breakaway TD, or a penalty. The ball is then moved the number of spaces equal to the difference of the values of the two plays. So, if the offense chose a run 3 and the defense chose a run 1, the ball would move 2 yards.

Where things get interesting is when a breakaway happens. Each defense card has a few play types that it’s strong against and weak against. When one of those matches the play type of the offense card, it triggers a breakaway for the defense or offense (respectively). An offense breakaway grants bonus yards, while defense breakaways can cause sacks or turnovers.

After the play, the offense card is discarded, while the defense player reclaims their card. When a drive ends and the other player takes over on offense, they must discard cards from their offense deck to match the number of offense cards the other player has left. This is the game’s timer. Each player starts with 15 cards on offense and when those run out, the quarter ends. Calling a time out will let you recover a card from your discard pile.

That’s the general flow of the gameplay. There are tons of more specific rules, such as red flag challenges, kick-offs, punts, safety, QB kneels, field goals, and more. Those are all pretty situational and equally streamlined.

Breakaway Football is a hard game to summarize briefly (re: my lengthy chunk of text above), but the actual flow of the game is incredibly smooth. There is a great back and forth between choosing cards and resolving plays that just works really well. Even as abstracted as the game is, (there are only 3 first down lines), this game does the best job of simulating the feel of football I’ve ever seen. Games will take about 90 minutes, yet it’s one of those games where it doesn’t feel if it is. We played two games back-to-back on our first night and would have played a 3rd if it wasn’t getting late.

One of the reasons is that the card system in the game is absolutely fantastic. Having two plays on a card gives you not only flexibility when you might want to audible, but also a chance to bluff your opponents. That I-Formation play, sure it’s most likely a run, but you can also sneak a short play action pass in there. If you catch your opponent in the wrong defense, that could mean a solid break away for some chunk yardage. Much like in real football, there are tons of mind games here between choosing formations and plays as a big part of the game is trying to out-think your opponent.

Speaking of the card system, the Game Day cards were an inspired addition. The game might have gotten a bit static and turn into a simple bluffing game without it, but this decks just the right amount of variability to keep turns interesting. I can throw that short pass and hope for some bonus yards on a streaking receiver, or the defense might be saved by a timely false start penalty. One other thing I liked about this deck is that it doesn’t affect every play. If you chose a run play and the game day card is for a pass, it’s ignored. This stops the deck from wrecking the game too much.

As much as I’m gushing about Breakaway Football, there are a couple of things to take note of. One is that the game day deck can cause a bit of swingyness to the game. If you just get lucky with the pulls, your opponent might score an easy touchdown or some chunk yardage even though you chose the perfect defense. Then again, that’s also part of real football. To help counteract that, each player starts the game with 2 challenge flags that can be used to negate a game day card. These were a great idea and definitely help reign in the randomness some.

The other is that the game is a tad pricey for the components you get. This is because it’s self-published on The Game Crafter. There are no economies of scale here to help with pricing. It clocks in around $57 for about 150 cards, a few tokens, and a foldable mat. While I think the gameplay more than makes it worthwhile, I could see some gamers being turned away by the somewhat high price tag.

Finally, Breakaway Football comes with a fantastic solo mode if that’s your thing. The AI to play against is really well done and can definitely give you a run for your money. It uses a few dice (not included) and a chart for what it does on defense. I thought I’d easily steamroll it, but boy was I wrong (or maybe I’m just a lousy play caller).

I’m always a little apprehensive about checking out self-published games on The Game Crafter. While there are definitely some gems in there, there are plenty of games that could have used much more time in development. Fortunately for football fans, Breakaway Football is amazing. In addition to everything above, I haven’t even talked about how each team is unique, with their own play decks and special abilities. Four come in the box, and there are other expansions available for purchase that are based on real world teams. I haven’t tried any of those yet, but the Rhinos, based on my beloved ’85 Bears, is definitely beckoning to me.

Breakaway Football, while not as affordable as you’d expect, is still worth the cost of admission. And with lots of expansion support, including ways to play seasons, weather cards, and more teams, this is a must own for any fan of football. I don’t think I’ve played a game that has come close to this one for just how well it simulates the sport and just how much fun it is.

Final Score: 4.5 Stars – The definitive game to own for fans of football. No other game comes even close.

Hits:
• Excellent ebb and flow to the gameplay
• Does a great job of simulating the sport
• Diverse teams with lots of expansion support
• Just the right amount of variability

Misses:
• A tad pricey
• Game Day deck can be swingy at times