We review Techno Bowl: Arcade Football Unplugged, published by Bombshell Games. Techno Bowl is a football simulation board game that promises to bring the arcade experience to your tabletops and we let you know how well it accomplishes this goal. 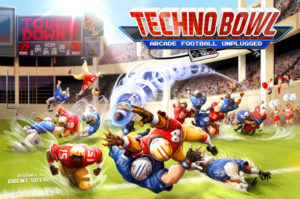 If you were a gamer in the 80s or 90s, then chances are you are familiar with Tecmo Bowl (or the much better Tecmo Super Bowl). It was the arcade football game that has really never been replicated since.

Well it seems that game designer Brent Spivey has drawn on this beloved franchise for inspiration for his new board game, Techno Bowl: Arcade Football Unplugged. Can you really capture the magic of Tecmo Bowl on your tabletop? Let’s find out!

Techno Bowl is a 2 player football simulation game that takes about 90-120 minutes to play.

There are actually a few rulesets for Techno Bowl with increasing levels of complexity. I’m going to give you a brief overview of how the game is played here, but you can download a full version of the rulebook here if you want all the nuts and bolts.

Each player gets to choose one of 32 NFL inspired parody teams. The basic game of Techno Bowl is a 7 on 7 affair. However, once players feel comfortable with the game, they can easily take things up a notch with player skills (more on that later).

A round of Techno Bowl starts with setting up the players on the line of scrimmage, starting with the coach on offense.

Next, each player chooses 5 player cards and places them in the order they want to activate them. When the coaches are ready, the ball is snapped and each coach reveals their first card. The player card with the higher number chooses who goes first. The coach then activates that player.

A player has the option to move their speed, move half their speed and perform an action, or just performing an action. The main actions are Blocking, Tackling and Passing, which all involve a skill check.

To perform a skill check, roll 2 six-sided dice. Modifiers are given for having friendly players in the area or opponents who threaten you. There are other ways to gain modifiers as well, but the max is +3/-3 to any roll.

Depending on the outcome of the roll, one of three things can happen:

A play ends when a player scores or is tackled. Players have four downs to score, there is no punting.

And that’s the basics of it. Like I said, this is just a high level overview, you can watch this tutorial video if you want to dive deeper in.

As a massive fan of the originally Tecmo Super Bowl video game, I was really curious about Techno Bowl. Tecmo Bowl is about as light as a football game as they ever made, yet it was also one of the most entertaining.

So here’s the thing about Techno Bowl. It was definitely not what I was expecting. It’s a lot closer to a football simulation than I thought it would be. Granted, there are still plenty of liberties taken here, and it’s abstracted plenty, but it’s also got a lot of depth.

One thing to know about Techno Bowl is that it has quite a learning curve. Expect your first game to take at least 2 hours or more. While the ruleset isn’t actually that hard, if you aren’t familiar with it, trying to learn from the dense rulebook can take time. Speaking of the rulebook, I will say that while it is very thorough, it’s not organized the best. It’s quite verbose, and looking up a rule will definitely slow the game down.

That being said, once you get a game or two under your belt, you are really going to enjoy Techno Bowl, if you are a football fan at least. The game flows really well and downtime is actually very minimal. Because players are choosing cards at the same time, and the ebb and flow nature of the skill checks, you are almost always doing something in the game.

The other thing to be aware of with the skill checks is that they can make the game REALLY swinging. As the modifiers cap out at +3/-3, you will be at the mercy of the dice no matter how well you plan. You could have the perfect play setup, and then roll a 3 on the dice, causing everything to fall apart. And if this were a eurogame, I’d probably be crying foul. But if you’ve every watched a football game it feels oddly appropriate in Techno Bowl.

And that’s the thing about Techno Bowl. It’s not a simulation, and it’s not an abstraction. It falls somewhere in the middle ground, and that’s one of the reasons it works so well. You might spring your running back free with a well-timed block, but then as he tries to juke a defender, he fails completely and fumbles the ball. Techno Bowl can be both strategic and chaotic and I love that about the game.

While the base 7 on 7 game works fine, I think I really started to enjoy the game once player skills were added in. I liked what designer Brent Spivey did and didn’t give every player a skill, as that would have made the bookkeeping tedious. You have 1-2 star players on your team and those skills really give the game another dimension. They let you do things that break the rules and tailoring your strategy around those players can lead you to victory.

Finally, I just wanted to mention that the production values in Techno Bowl are really good. The field is a neoprene mat, and the game comes with plastic “bench” to hold your player cards. In fact, I think the publisher went a tad overboard by including 32 teams with the game. I would probably have been happy with 8-10 teams to start with. But hey, I’m never going to complain about extra content!

Football fans take note, Techno Bowl is a solid, light simulation of your favorite sport. While the game wasn’t the casual, quick playing affair I had hoped, it still ended up being a fun and excellent sim of the sport (especially once you add in the skills). However this also isn’t going to be a game you’re going to pull out with your casual friends, as the learning curve in Techno Bowl will probably be a bit too intimidating for them.

But once you get a few games under your belt, you can have a great time with Techno Bowl. The rules work well for a sport sim, and the multiple play mods add in a ton of replay value. In fact, there are leagues already popping up all over the place. Might be something worth checking to see if one is in your area.