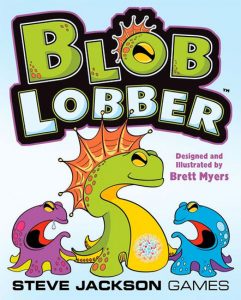 I’ve said before that my kids love dexterity games. From Meeple Circus, Coconuts, Bounce Off, or Drop It, to name a few, they love playing these games that challenge their reflexes and coordination. One main reason that they gravitate toward these games is that the rules are usually easy to learn, which gets these games to the table fast. My kids, like most, are not patient and so the faster we can start the less frustrating the experience is for all.

This brings us to today’s review, Blob Lobber from Steve Jackson Games. In this game, players fling two-sided Blob Cards to bomb enemy Blobs and earn the most points. Blob Lobber is a family friendly dexterity game for 2-4 players that plays in 10-15 minutes.

Blob Lobber set-up is easy. Place one Lesser Blob card in the middle of the table. Then randomly place each of the 4 Blob Queen cards one Blob card away from the center card so that there are 5 cards on the table.

Each player picks a Blob Queen card color. Any blobs matching your selected color are considered friendly and the rest are enemies for scoring purposes. The first player then draws a Lesser Blob card from the blob deck. Each card is two sided showing Lesser Blob(s) on one side and a bomb on the other. The player holds the card 12” from the table and has the blob side face up. The player drops the card (which must at least flip once) and tries to destroy blobs.

As you can see from the overview section, Blob Lobber is easy to learn and get to the table. Both my kids and wife understood the rules and started playing 2-3 minutes after we opened box. So, this one is really-fast to get to the table.

It’s also worth noting that this game is on the smaller side and can be taken and played almost anywhere. I wouldn’t call it true pocket-size, but maybe coat pocket size. The kids and I busted it out in the waiting area of a local auto service center. The table was on the smaller side but we got a few quick plays in nonetheless.

Unfortunately, that’s about all the positive my family and I had for Blob Lobber. This game was very random both in card draws and when dropping Blob cards. And it’s the random on the latter that made the game frustrating and not much fun for my family and I. A dexterity game should be fun, especially in the dexterity part of the game, but Blob Lobber really falls short there. There’s no sense of accuracy when dropping the Blob cards.

The reason there’s a lack of accuracy is because the Blob cards are too thin. If Blob Lobber had thicker card stock, then this would give players a stronger sense of accuracy like other dexterity games. But the card stock is very thin and if you watch the cards when they are dropped, they almost float to the play area instead of fall. There’s no sense of control and the cards seem to literally fall where they may.

Lastly, Blob Lobber just lacks any depth and each play feels too much like the last one. You basically pickup a card, drop it and hope to land the card Bomb side up on an enemy Blob. There’s not much in the way of strategy here, but there’s plenty of repetition to be had.

Blob Lobber is a fast to learn and quick to the table dexterity game that can go almost anywhere. Unfortunately, it’s too random and lacks any depth for continuous play. The thin card stock is the main cause for the inaccuracy when you are dropping cards to Bomb enemy blobs which makes the game more frustrating than fun. Blob Lobber does have a low price and might be a decent game for younger children who don’t care about the lack of depth and repetition.

Misses:
• Too random
• Cards are too thin
• Lacks any depth