We review Meeple Circus, a new stacking dexterity game for 2-4 players. In Meeple Circus, players are trying to earn the most points by stacking various circus elements on top of each other. 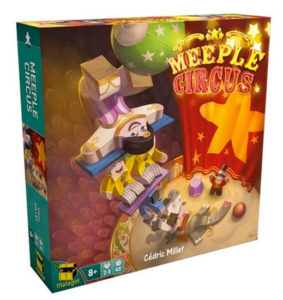 Confession: I haven’t been to the circus in a VERY long time. That’s a fact that probably won’t be changing either. I’m sure it has nothing to do with my giant, perfectly rational fear of clowns. I have no idea what crazy person could find those things entertaining, but to each their own.

Anyway, that completely normal phobia doesn’t stop me from checking out a game themed around a circus, especially when said game has a dexterity element (a known favorite of mine). Meeple Circus is a game where players are trying to earn the most applause (points) by deftly placing various meeple acrobats, animals, and entertainers in their circus. Does the fun stack up? Let’s find out.

A game of Meeple Circus is played over three rounds. Each round begins with a drafting phase as players select two tiles in turn. Each tile will show what components a player adds to their collection.

Once each player has drafted; the building phase beings. Using a free app, someone says go and hits play. Your preferred device will blare out one of three different circus-themed tunes and players must try and stack their components in their circus ring. Players have until the music stops (a couple of minutes) to finish stacking, with the first two players collecting a speed bonus.

Players will then score points for their “act”. There are three types of acrobats that each score points in specific ways, and there are 4 public objectives that players can also try and score (these require specific components to be placed in certain ways).

The second round is much like the first, except that players will also draft a Star Performer, a unique meeple that scores in their own way.

The third and final round shakes things up a little. Players will draft a performance tile that will have them completing a challenge for extra points. These range from having to place your meeples without using your thumbs, to having to stand up and take a bow whenever there is clapping on the audio. This round is also taken one at a time, instead of in real time.

At the end of the final round, the player with the most points is the winner.

Right out of the gate, Meeple Circus seemed like a game that I would really enjoy. It’s got a nice variety of components, a fun dexterity element, and a cute theme. So I picked up this one sight unseen and hoped for the best. Well I’m happy to say that my gamble paid off because I had a blast with Meeple Circus.

While stacking games aren’t exactly new to tabletop gaming, Meeple Circus still does a great job of feeling both unique and providing loads of entertainment. I think the wide variety of components (all well-made) and the various goals helped keep things fresh. Some of the challenges (and guest performers) are very creative and players will have to keep their thinking caps on to best figure out how to use all their pieces. As you are limited to what you have on hand, you really want to try and maximize each of your components to complete as many goals as possible.

The integrated app with Meeple Circus is really just a glorified timer (except sometimes in the 3rd round), but it really enhances the game play in a way I was not expecting. I’m the last person that thinks board games need a soundtrack, but the music in Meeple Circus really helps bring that circus theme home. Its loud and obnoxious music, but it fits the game so perfectly that I wouldn’t ever play without it.

Speaking of the last round, I really wasn’t sure how I’d feel about the changes it brings. The game switches from real time to turn based, and some of the challenges are very silly. However after playing a number of times, I can tell you that it clicks just fine with the rest of the game. In fact, the switch to turn based actually adds a lot of tension and excitement. There will be times you are holding your breath stacking something as your opponents are loudly hoping you’ll screw up and knock everything over.

Finally, I do want to point out that we adopted two house rules that someone on BGG had suggested. These changes help to fix a few of the flaws in the game. The first being a way to keep the stacking fresh each round by changing out the goals, with the second change returning some of the tension back to the final round. I’d highly recommend checking those out if you get the game.

Meeple Circus was a huge hit with every group I’ve brought it out with so far. I’ve played this with my non-gamer family and with my gaming group and just about everyone has asked to play it again. Overall Meeple Circus has been universally loved as a charming stacking game that has a really strong, thematic tie.

Other than a few minor quibbles (addressed by the house rule above), I thought Meeple Circus was a great game. It’s is a quirky game that you are probably not going to want to play over and over, but when you are in the mood, it’s the perfect game to pull off the shelf for an hour of fun and craziness.

Final Score: 4 Stars – A great stacking game with some strong, thematic ties. Even if you are not a big fan of dexterity games, it’s worth checking out.

Misses:
• Without a house rule, the public goals can feel repetitive