We review Hexenwood, a new game for the Blinks system from Move 38. Hexenwood can be played in teams, competitive, or even vs an AI. 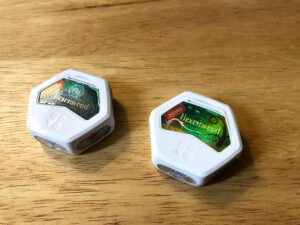 I’ve covered the Blinks system a few times here on Board Game Quest. If you are not familiar with these little technological marvels, you can read my original review here. The short of it though is it’s a unique device that can be used to play a wealth of casual games. Today, we are going to look at a new and innovative game for Blinks called Hexenwood. So, get ready to fight forest with forest.

Hexenwood can be played with any number of players (if you are willing to team up) but has four possible teams of colors in the game. Once you’ve set up your map—you’ll want as least 12 Blink units to use—each player chooses a color.

On your turn, you’ll choose one of the Blinks showing your color and select it. You can then target any open (green) Blink adjacent to that unit. Doing so will highlight your move options. You can click any adjacent open space to claim it. You also claim any enemy units adjacent to the targeted space.

Alternatively, you can jump one space away to an empty space. This allows you to claim units like with the previous option, but instead of spreading your area, you leave your previous spot open. So, it’s a bit more daring and can leave your flank exposed.

The game ends when all the spaces have been claimed. The player with the most colored Blinks on the board wins.

Hexenwood is a great game. It’s easy to learn and scales really nicely. It can definitely be thinky at times, which is doubly true once you start expanding out the board. When you put gaps or alternate routes on the game board, you’ll have a lot more to think about when you are making your moves as it will create choke points.

But one of the most interesting things about Hexenwood, which I haven’t even talked about yet, is that you can play solo vs an AI. As far as I know, this is the first time a Blink game has offered an AI to face off against. It comes at three different levels of difficulty and you know what? The hardest level is actually pretty good.

But I love the potential for playing Blink games vs an AI, as it just opens up a great possibility for solo play. Blink games are usually quick and light, so it’s something you could casually play on your own when you were trying to kill some time. Solo gaming has really taken off in the past year, so it’s great to see the Blink system embracing this trend.

Hexenwood was also a great game to show off this new feature. Not only is the game fun, but highly flexible. In addition to playing solo and VS mode, you can also play teams with your friends. The AI unit can also be added mid-match to someone’s team if you want to balance out the skill level between players. Overall, this is a win in my book.

The Blinks games always do a great job of impressing me. While not everyone is a home run, the designers always manage to do a lot with a tiny unit of magnets and lights. And Hexenwood is another win for the Blinks system. It not only has fun, flexible, and strategic gameplay, but introduces a new AI unit that opens up a world of options for the system as a whole. Hexenwood should be on the radar for anyone who owns some of the Blink units. Hexenwood is available as part of the Sakura strategy pack from Move 38.

Hits:
• Fun, flexible gameplay
• New AI to play against
• Can be played solo, pairs, or in teams

Misses:
• Does require at least a dozen blinks to play