We review Ashes Reborn published by Plaid Hat Games. In Ashes Reborn, players each take on the role of a phoenixborn and are dueling each other to be the last one left standing. 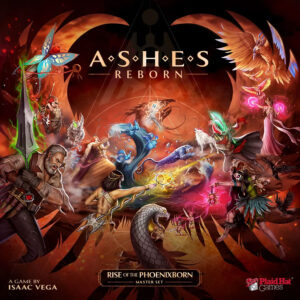 It is 2015. You are at Gen Con. The new buzz is going on about a beautiful living card game from Plaid Hat Games, fresh off their massive success with Dead of Winter. And you have to have it. After buying the core box, a few expansions, and a sweet insert… Asmodee buys up Plaid Hat.

And there lies the end of the Ashes: Rise of the Phoenixborn’s story. After being acquired by Asmodee, Ashes expansions and organized play ceased to exist. The game died and its beautiful art was relegated to the dark corners of the gaming world where people play dead card games.

But, apropos considering the phoenix in the name, Ashes has risen again. Plaid Hat has extricated itself from Asmodee and Ashes was re-released with some rules changes and balance adjustments and is alive again as Ashes: Reborn.

In the most meaningful ways, Ashes: Reborn plays exactly like Ashes: Rise of the Phoenixborn. The core set comes with six different Phoenixborn with preconstructed decks you can play with. You play with a deck of 30 cards and you have 10 dice that are your resources throughout the game. You get to pick any five different cards from your deck to be your starting hand.

Each round you’ll start by rolling your pool of dice. Each die has three separate symbols. A common magic symbol is found on three sides of every die. Then, there are two that are specific to that class on magic. The class symbol is on two sides of the die and the power symbol is on one. Each card requires a certain number and type of dice to be exhausted to play them or activate their abilities.

On your turn, you can take one main action and one side action. There are special icons on each card to designate whether playing/activating it is a main or side action. Attacking is always your main action for the turn though.

When you attack you can either choose one unit to attack another unit directly or any number of units to attack your opponent’s phoenixborn. If you are attacking a phoenixborn, the defending player can have any of their units block any of your units. Any unblocked units damage the phoenixborn and any defended units do damage to the blocker. If you attack a unit directly, in most cases that damage will just happen to the unit. There are a few units with a special unit guard ability that allows them to jump in front of this type of attack.

Players continue taking main and side actions until both players pass consecutively for their main action. Players then draw back up to five cards and reroll their dice and prepare for the next round. This continues until a phoenixborn has taken damage equal to its health.

I am a sucker for 1-versus-1 dueling games. I’ve played a ton of Magic: The Gathering. For my money, it’s the best-designed game in the world. I have also dipped a toe into Flesh and Blood, Ashes, Lightseekers, Star Wars Destiny, Netrunner, Doomtown… probably others I’ve just completely forgotten about.

The pattern is often the same, a spike in interest that trails off pretty quickly. If you buy the Ashes: Reborn core set you will likely find yourself in that pattern.

The core set provides, undoubtedly, a lot of content. Six playable characters with four different types of magic between them. Forty dice you can use in deckbuilding. And preconstructed decks to get you off and running without putting in a lot of effort. But my main takeaway after a lot of games with the core set was that the dice-as-resources was just a major downfall of Ashes.

The issue isn’t the randomness, however, because there is a side action that is always available to you to change dice to whatever you need them to be. So the problem became how little I cared about what I rolled. The cost to change a die is that you must discard a card from your hand or the top of your deck. While running out of deck can be a problem, it isn’t typical and generally, you won’t care too much if you have to discard a couple of cards each round to make the optimal plays. Instead of feeling like your dice matter, it just felt like you have 10 wild resources to spend each round.

Not to mention the preconstructed decks feel a bit like a grind fest. All phoenixborn will be creating units and you’ll be trying to attack their phoenixborn only to have your attacks blocked. It’s a game of small edges and sneaking in a few damage at a time when possible through clever timing.

But there is a lot more to explore than the core set. There are three “big” expansions that include a new type of magic along with 10 dice for those cards. There are also maybe a dozen other expansions with new phoenixborn that each come with a preconstructed deck. Once you start to acquire a critical mass of these expansions and explore deck building the game really starts to shine. You can start building decks with three or maybe even four different types of magic, but you still only have 10 dice you can use. So you may end up having something like two time dice, four charm dice, two ceremonial dice, and two illusion dice.

Now the cost of having such a mix in your dice pool means you may not always be able to play exactly what you want. If you have three time cards in your hand or spellbook there may just not be an option to use them all in a round. Of course, there are some cards that can bring back previously exhausted dice and in a deck using so many different types of magic that may be useful, but it comes at the cost of playing spells that impact the game more directly.

Now once you’ve acquired a lot of cards and explored deckbuilding I think Ashes goes from a good to a great game. But it still has some issues worth pointing out. Some of the timing rules are a bit wishy-washy and without diving into the very detailed FAQs or asking in the community Discords, it’s tough to know some of the interactions intuitively.

But when the deck building opens up, so does the game. You get more synergistic decks that have more powerful interactions. While it may not be a game of massive combos and game-ending plays that you can find in other card games, it certainly feels like less of a grind. It’s easier to remove units from the battlefield or temporarily exhaust them so you can make a big attack for massive damage. Ashes also has a large enough card pool that you can create decks that try to win primarily by directly damaging the opponent rather than attacking with units or by milling the opponent’s deck and leaving them without cards to play.

Are you in the market for a pull-off-the-shelf-sometimes dueling game? I’m not sure Ashes is it. The Ashes Reborn core box alone makes the game, honestly, a bit boring. There is very little tension in the dice roll and the preconstructed decks turn into very grindy matches of trying to sneak in a damage here and there. They are well-balanced but not necessarily my style of fun.

If you want to grab a few expansions, especially those that add dice to the game, and explore building your own deck there is a lot of fun to be had with the Ashes Reborn system. Very much like building a deck of multiple colors in Magic, there is a lot of trade offs in how many types of dice you try to squeeze into your deck. You can put together cards with a more powerful and cohesive strategy and games feel more action-packed and end in a matter of 3-5 rounds rather than a grind filled 6-8 rounds with preconstructed games.

Final Score: 3.5 Stars – Ashes is the most CCG-like of the LCGs I’ve played. Rewards investment in lots of expansions and exploring the card pool to make cool, powerful things happen.

Hits:
• Rewards those who put in effort. A lot of interesting deck building choices to make.
• Love the mechanism of picking your first five cards from your deck.
• Art is still among the best in all of gaming.

Misses:
• If all you have is the core set you’ll lose interest quickly
• Best when you invest another $100 or so into expansion content