We review the easy to learn board game Arcane Academy, from designers Eric Lang and Kevin Wilson. Each player takes on the role of a student at a magical academy completing their final exams. 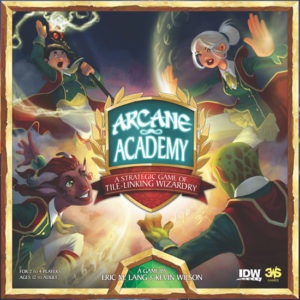 School is in session at the Academy of Magic and Sciences and it’s time for the final exams. No, this isn’t the Hogwarts School of Witchcraft and Wizardry. In this test of will and intellect, you must forge magical items and focus your will to cast powerful spells, all with the goal of becoming “Best in Class”.

That’s the theme of today’s review of Arcane Academy. This is the first collaboration between acclaimed game designers Eric Lang (Blood Rage, X-Com) and Kevin Wilson (Arkham Horror, Civilization: The Board Game). Are these two designers a match made in heaven? Time to find out!

Arcane Academy is a tile laying and engine building game for 2-4 players that takes about 30 minutes to play. Arcane Academy plays well at any player count.

The goal in Arcane Academy is to acquire the most victory points. Players accomplish this by casting spells and crafting magical items. During the game players will be playing tiles onto their slate, which will determine what actions can be taken. With clever tile placement, players will be allowed to chain actions together, giving them more efficient turns. The spells and items cast will also give players special abilities to aid them in their quest at being the top student.

Overall the components in Arcane Academy are solid, however there were a few areas that could be improved upon.

The slate that players will be placing their tiles on is made of a fairly light cardstock. So far we haven’t had any issues with it, but I would have liked to see a heavier stock used, as I worry it could bend or be damaged over time.

The tiles themselves are work well, and the game even comes with a bag to draw them out of. I always prefer drawing tiles out of a bag vs picking them from stacks. It feels neater and more random.

The gems are used to craft magical items and those look great. They have a nice crystal shape, which gives them a nice thematic feel. However, the dial used to track a players will power is WAY too loose. It almost feels like a spinner. I found it to be too easy for the dial to get bumped, changing your current will power.

Game play in Arcane Academy is delightfully easy to learn. Rules explanation should only take a few minutes.

Starting with the first player, each player takes a turn with one of two options:

Cast:
To cast, you take an exhaustion cub and place it on the tile on your slate. Each slate starts with a tile in each of the four corners. The tile you place it on, denotes which action you can take.

There are 5 actions in the game:

If you activate a tile that is linked to an adjacent tile (by way of the linking circle), then you can activate the adjacent, linked tile as well (assuming it’s  not exhausted). You may do this with all adjacent, linked tiles, but only immediately adjacent ones. No going further out than the 4 tiles around your originally chosen one.

Rest:
The other option on your turn is to rest. Remove all exhaustion cubes from your slate. You may also discard a private assignment card and draw a new one if you desire.

Once a player has completed their 8th assignment, each player gets one more turn and the game ends. The player with the most victory point wins.

Arcane Academy had flown under the radar for me and, to be honest, I didn’t have too high of expectations for it. A tile laying game with some cards. Ok, doesn’t seem all that earth shattering.

Well, I’m man enough to admit it when I’m wrong. Arcane Academy is actually a pretty fantastic game. There is an elegant simplicity with it that belies the actual depth it contains. You can be up and playing a game of Arcane Academy in almost no time due to its easy to learn rules.

Once you get going, Arcane Academy is going to suck you in with it great engine building nature. The chaining mechanic was a fantastic idea and it will have you poring over your slate each turn as you try to maximize your actions.

“Do I activate this tile here, and chain these, or do I activate one of the side ones, allowing me to get multiple activations off this tile?” Thoughts like this can dominate a game, especially once you get deep into it.

Things are further expanded up once you start building items. While spells can give you a nice, one time boost, the right item can help tailor your strategy for the whole game. Some will be always active that give you a nice bonus, while others might be powerful but use activated. Arcane Academy is full of hard decisions, from which tiles to activate to which cards to spend your hard-earned resources on. So expect many paths to victory in Arcane Academy.

Even with all of these options for players to base their strategies on, the game still flows incredibly well. Turns will go by quickly and downtime is super minimal. I think that’s a testament to just how streamlined designers Lang and Wilson made this game. It’s almost like they added in only what absolutely needed to be there and cut away all the chaff. This just proves that you don’t need a 25 page rulebook to have a fantastic game that will keep players entertained.

If I were to dig up a complaint about Arcane Academy (other than the aforementioned component issues), it would be that the theme is mostly skin deep. Rarely did I feel like I was dueling with other students for the top prize.

I really enjoyed Arcane Academy. From it’s fantastic engine building nature, to it’s multiple paths to victory, this one definitely caught me by surprise. While I have no concerns about enjoying Arcane Academy with my gaming group, I also think it would make an excellent gateway game. I’d put it on the complexity level of Splendor and it might even be replacing that game as one of my goto gateway games.

Other than a few qualms about the components and theme depth, Arcane Academy was a full on win in my book. The designers streamlined this one perfectly and it’s super easy to get to the table. If you are looking for your next, lightweight game, give Arcane Academy a hard look. This one is going to be staying in my collection for a long time.

If you’d like to pick up a copy of Arcane Academy, you can get it for about $30.

Final Score: 4.5 Stars – A surprising hit for me, Arcane Academy gives players only what they need in terms of rules, and the full just arrives from there.

Hits:
• An elegant simplicity to the game
• Can be enjoyed by gamers and non-gamers alike
• Easy to learn rules and quick turns
• Great engine building natures

Misses:
• Will dials are way too loose
• Theme could be a bit deeper