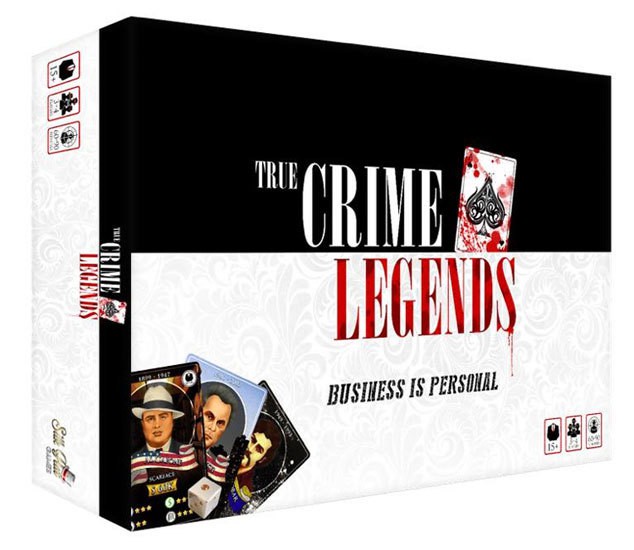 Do you like crime dramas? I do. Did you think you could have run crime syndicates better than crime bosses like Michael Corleone or Tony Soprano? I think I could. No matter what your answer is, you now have the chance with True Crime Legends by Silk Hat Games, coming soon to Kickstarter.

In this criminal themed game for 3-4 players, you will build and run your own criminal syndicate and try to become the top dog of the underworld. Sound like fun? Then let’s take a sneak peek and see.

In True Crime Legends, players will build and run a criminal organization. Players will buy assets, recruit new members, earn, smuggle, and other dirty deeds to gain money to grow their underworld empires. Your rivals will attempt to murder your members and your boss, steal from you, and even firebomb your assets to stop your growth. The first player to reach $1 million Bills with an active Boss wins the game.

Place the game token to the starting position on the Phase Tracker and then the Character, Asset, Item, and Event card decks are shuffled. The Event deck is left face down but 4 Asset, Character, and Item cards are dealt to the Market Mat.

True Crime Legends is made up of multiple rounds and each round is divided into Phases. The players will resolve each of the following phases in turn order, and then move to the next phase once the last player is done. The Phases are also split into Night and Day and are as follow:

Start (Day): Beginning of a new round. After the starting round, players will give their Turn Order Card to the player to their left. Also, certain Vice Event Cards effects will need to be resolved.

Events (Day): Players draw a face-down card from the Event Deck and resolve its effects. Most event cards have a one-time effect and are discarded. Some Event Cards, like Vices, are ongoing and stay in play until discarded.

Market (Day): During the Market phase, players can purchase 1 Asset, 1 Character, and 1 Item Card. Once purchased these are added to the Player’s Syndicate Mat.
• Assets range from Private Islands to Cargo Planes and will provide a Trait bonuses to their Syndicate.
• Characters will be placed into 1 special role within the Syndicate: Underboss, Hitman, Bomber, Enforcer, or Accountant. Each role provides special bonuses to the Syndicate.
• Items will give your Boss and Characters a bonus to their Abilities or Traits.
Once an Asset, Character, or Item is purchased from the Market, they’re immediately replenished so there are always 4 to choose from.

During the Day (represented by white on the phase tracker) – players are allowed to upgrade their bosses, release bosses and characters from the Hospital or Jail, and switch Character roles, Assets, and Items on their Syndicate Mat if they want.

Actions (Night): Players can choose a single ability to use from their Boss and Character Cards on their Syndicate Mat. Abilities include:

Actions succeed if you roll a die equal to or less then the action level. Failure of some actions results in Retaliation from rivals. Note: Bosses can only be targeted by other Bosses’ actions and Boss killer characters.

Income (Night): Players gain Bills from all their Assets and add it to their Stash. All players announce their new Stash total.

During the Night (represented by black on the phase tracker) – players CANNOT upgrade their bosses, release anyone from the Hospital or Jail, or switch Character roles, Assets, and Items on their Syndicate Mat.

Upgrading your Boss: Players can increase their Bosses Level if they meet the Bill cost and Prestige requirements. Prestige is a trait that is gained from Assets. Boss abilities and traits will increase and even change as they increase in level.

Jail & Hospital: Bosses are not considered “active” in either place and cannot use their actions. Bosses in Jail cannot collect Income from Assets, and Bosses in Hospitals cannot collect Vice debts. Bosses and characters are unable to retaliate to murder actions when they are hospitalized. Both places have release fees and can be paid during the day phases.

Winning the game: The first player to have $1 Million Bills in their Stash and has an “Active” Boss wins the game.

As you can see from the How to Play section, there is definitely a lot to keep track of in True Crime Legends. This is a game that’s going to demand that all players pay attention. That being said, it’s not a hard game to learn or play. The Phase Tracker is an excellent game resource tool to keep all players organized and on task. I honestly wish more games did trackers like this because it helps the game to move forward. Plus the Day and Night is also a slick mechanic. I like the fact that you can shuffle around cards on your Syndicate Mat to maximize card support but that you’re also restricted as to what you can do for half of the turn as well.

This game has many positives and one of the biggest is the Market system. I love the fact the True Crime Legends give players the chance to choose their own cards. Certain card pairings are more logical then others. You wouldn’t want to pair a Character with the Secure Trait with an Asset that did as well. If it was all random then you’d be stuck and hope you wouldn’t draw bad matches but with the market system you get 4 different choices each turn to make the best matches possible.

I know you just read that I like it when players are given choices but I think the Event Cards are best when they are luck of the draw. The Event Cards give a nice mix of positives like the option to go on a bank raid and negatives like the Vice: Gambling Addiction that makes you pay debts you owe at the start of the turn. All Event Cards help to add to the game play. Silk Hat Games will be increasing the amount and types of Event Cards which should expand on what was in the prototype. The new Event Cards will have more multiple player interaction and even Global that would affect all players.

The last detail of True Crime Legends that was a huge plus for me was the actual Character Cards. These all include actual famous criminals from the last 100 years. There are some that are very familiar to me like Al Capone but others from across the globe that I didn’t know who they were until I did some research like Cheung Tze Keung “the Big Spender” from China. The stats on the cards are also grounded in history with characters such as Meyer Lanski and Arnold Rothstein having excellent money making abilities while characters such as Pablo Escobar and Griselda Blanco can smuggle large amounts of contraband. When you see some of the names and nicknames of these famous criminals they might peak your interest as did mine as you who these notorious people were and what did they do to become so infamous.

Even with a prototype version, my group and I definitely had a blast with True Crime Legends. I think that’s a good sign given that the game is not final but is still lots of fun. The Phase Tracker and the Market have pretty solid mechanics in the prototype version and really add to help organize players and give them excellent choices.

I do look forward to playing the final version with the full list of Event Cards. When I heard that these additional cards would add more player interaction I was excited. As you can see from the Boss and Character actions, True Crime Legends already has a high level of player interaction but if that now includes the Event Phase – sign me up!

If you’re a fan of crime dramas and like board games with a similar theme, then True Crime Legends is absolutely worth checking out. This game gives you the feel that you’re trying to build a criminal syndicate while battling your rivals to be the Kingpin of the crime world.

True Crime Legends is coming to Kickstarter in Spring of 2017.