We review the Aztecs expansion for Imperial Settlers. Published by Portal Games, the new Aztec faction not only adds a new, thematic faction, but also a new mechanic in the form of the prayer action. 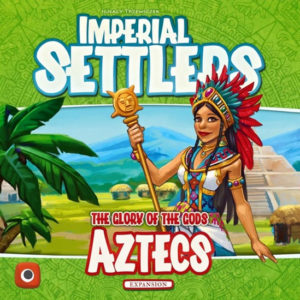 Imperial Settlers has been one of my favorite card games since its debut in 2014. It combines unique factions, engine building, and multi-use cards, all mechanics that I love in card games. You can read our full review of Imperial Settlers here, but suffice to say, we love it.

Since its premiere, Imperial Settlers has released 2 small box expansions (Why Can’t We Be Friends, 3 is the Magic Number) and one new faction (Atlanteans). Today, we are going to take a look at the 6th and newest faction for Imperial Settlers, The Aztecs.

Imperial Settlers: Aztecs comes with a 60 card faction deck for this new group. Not only are the standard Production/Feature/Action cards here, but Aztecs also incorporates concepts from the previous 3 expansions. Notably, the sets from 3 is the Magic Number, the Open Production locations from Why Can’t We Be Friends, and the Gear resources from The Atlanteans. So full backward compatibility here.

However, the main thing that the Aztec faction introduces is a new Prayer mechanic. Prayer lets the player gain resources, workers, or other items by drawing cards off the top of the deck. For example, a card might say “Pray 5: Gain 1 worker for each pink card drawn”. In that case, you’d draw the top 5 cards from the common deck, hoping for pink cards. Some Prayer actions require you to guess a color before drawing, while others will let you choose the relevant color afterwards.

The Aztec expansion also comes with 10 cards for each of the game’s previous factions, most of which incorporate this new prayer mechanic. Notably however, the expansion doesn’t include any new common cards or solo play cards.
Update: I’ve received word from Portal Games that the misprint only affected a small number of copies released at Essen, and that every copy being sold now should have the correct cards.

The previous Imperial Settlers expansion, the Atlanteans was really different from the core factions. To be honest, I thought they were just OK and they were rarely the first faction I’d reach for when we played.

The Aztecs though, I really like. They feel a lot more in line with the core factions of Imperial Settlers, yet still different enough to have a good amount of variety. Interestingly, the Aztec faction stores stone on its faction board, and is the only faction to not gain a defense token during production. So their cards are a lot easier to raze then others.

But the main feature here is the prayer mechanic, which I thought was a great addition to the game. If you are a bit of a gambler, then you are probably going to be a fan of prayer. Personally, I really enjoyed the surprise when drawing cards and the almost press-your-luck like nature to it. It added just a tiny bit of excitement to the game as I drew the cards.

The other benefit of the prayer action is that it lets you cycle the cards in the common deck a lot more quickly than usual. Whether this has any tangible benefit on the game is up for debate, but psychologically, it feels like I’m accomplishing something and seeing a more diverse group of cards.

Another neat mechanic from the Aztecs are the few faction cards that help other players. Some cards will provide a really nice bonus for the Aztec player, while also providing a smaller bonus to one of your opponents. I thought this was a clever balancing mechanic that also added in a tad bit of player interaction.

With this new faction, and 10 additional cards for other players, comes the decision on how to add the cards to your existing decks. There are two official rules: Open Play and Standard Play. Open play basically says to toss all the new cards in and have fun. However your decks might not be very balanced anymore. Standard Play has players creating decks of exactly 30 cards, with a few building restrictions.

I’m not ashamed to admit that we play Open Play. I know it can produce a more random game, but most of our plays of Imperial Settlers are fairly casual and I don’t have any desire to do deck building in this game. So if you are OK with not having a perfectly balanced game play, I think Open Play works just fine. However, if you are super competitive, you might want to stick with the Standard Play.

Finally, with this 6th faction, you could conceivably play Imperial Settlers with 6 players. Frankly, I think you’d be insane to do that as the game would take forever and the down time would be particularly punishing. But hey, if you were wondering, it’s totally doable now.

Imperial Settlers continues to be one of my favorite card games and I’m always excited for new content to be released. I like that Portal Games isn’t just releasing factions that are different in theme only, but ones that add completely new mechanics to the game. Each of the two new factions feels wholly unique and I’m excited to see what else they have on the horizon for us.

If you are a fan of Imperial Settlers, then the Aztecs are a must buy. If you don’t own ether of the new factions yet, I’d definitly put Aztecs on the list to buy over Atlanteans. They feel a bit more newbie friendly and work seamlessly into the base game.

If you’d like to pick up a copy of the Imperial Settlers: Aztecs expansion, you can get it for about $25.

Misses:
• Easy not to notice the misprinted card