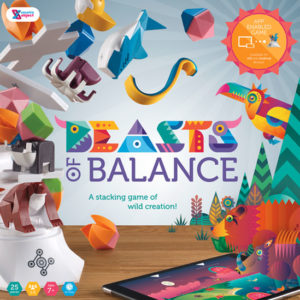 If there is a growing trend in board games that I absolutely love, its app integration. While some were skeptical at first, I’ve yet to see a game made worse by having an integrated app. In fact, most of the time, the game is way better than it could ever have been. Today’s review of Beasts of Balance falls into that category.

In Beasts of Balance, players are trying to earn the most points by stacking creatures and other shapes onto a digitally connected platform (called a plinth in the game). As players stack items onto the plinth, the integrated app will reveal how the new shape interacts with the digital world. The goal of the game is to earn the most points, which is done by creating and caring for the animals you place.

Beasts of Balance is not a cheap game, however to help defray concerns about that I can attest that it’s extremely well made. The shapes come in a variety sizes and colors, all of which feel very durable and should hold up to repeated plays. There are a total of 6 different animals (2 air, 2 land, and 2 water), and I could easily see kids playing with these outside of the game.

The app itself is very well designed (free to download) and includes plenty of exciting visuals and sounds to help immerse the players into the game. Finally, I should point out that there is no rulebook for the game as the app offers a guided tutorial that will get you through the basics of the game.

To play Beasts of Balance, you’ll first need to connect the plinth to your tablet or phone (it connects automatically via Bluetooth). After that, you begin by choosing one of the six animals to place on the plinth. You first touch the glyph on the animal to the same area on the base of the plinth; this activates the animal in the app. Once activated, simply stack the animal on the platform and it will automatically appear in the digital world.

After that, the world is your oyster. New animals can be added in the same way. Animals will also lose energy each round and stacking elemental shapes of the appropriate color can help “feed” them and keep them alive. There are also a few special tiles to stack, such as migrations, crossbreeding, haste, and distraction. These all do different things and you can experiment with them to your heart’s content. If playing with multiple players, you’ll simply take turns stacking items.

As you stack more and more on the plinth, your score will increase. The goal is just to earn the most points possible. If something falls off, you have a limited window to restack it before the game ends.

Beasts of Balance is quite the unique game. While I’ve played stacking games before (Junk Art), this is my first digitally connected one. And let me tell you, that app integration makes all the difference. If this was just a stand-alone stacking game, it would probably fail to even be a blip on the radar. But the inclusion of the digital app really does add something special to the game.

As you place things on the plinth, it’s really interesting to watch what happens in the world. This is especially true when you have a crossbreed or migration and a new creature appears. The app even keeps a bestiary where you can check what you’ve made in the past.

So the real question is who this game is for. To be honest, this is game you are going to buy if you have young ones at home to entertain. While the adults I’ve tested this with have all enjoyed it, I think it’s not going to be much more than a filler game for them. And at a price point of $99, that’s way too high for a filler. But every kid that has played this game has been absolutely enthralled with it.

Speaking of children, I also think that Beasts of Balance takes a page out of the Skylanders book and I can easily see kids playing with the animal and shapes outside of the app. As mentioned above, everything is very durable and well made.

The player count for Beasts of Balance says 1-5, but I think this is really a solo game. Games are quick enough that it’s fine for one player to see how high of a score they can get, and then let the next player try. We tried a few cooperative games, and it really didn’t do much for the players. Most of the time the kids were arguing over whose turn it was to stack something and seemed disappointed when it wasn’t theirs.

One of the great things about this stacking game though is that the app actually gives you goals. In most stacking games, you are just trying to get everything on the platform. But in Beasts of Balance, the order matters. If your Shark is about to become extinct, then you better grab a water element to help keep him alive and earning you points. Once you get past the first creature, every item should be chosen for a reason. Order can matter here.

Finally, the distraction piece is one of my favorites in the game. It gives you extra challenges to do during the game to earn additional points. You might have to hold the sun on the screen while you stack (basically forcing you to stack with 1 hand), or you might have to tap moons while you are choosing your next piece. It was a great idea that really helps keep the game entertaining.

Beasts of Balance is definitely an unusual game. In fact, I almost hesitate to even call it a game; it really feels more like an activity. Sure, there is then end goal of trying to get a high score, but that almost feels secondary towards the sense of discovery you get from seeing how what you stack integrates with the digital world.

So I’ll still providing a rating, because that’s what we do here, but take it with a grain of salt. Read what I wrote above as that can give you a better idea of what it’s like to play this game (which is true of basically every one of our reviews).

Beasts of Balance is an incredibly well made game that you could have safely ignored had it not been for the digital app. But it does have the app, and I think anyone with children at home should have this one on their radar. Beasts of Balance is sure to keep them entertained and I bet you’ll be popping in for a play as well.

If you’d like to pick up a copy of Beasts of Balance, you can get it for about $99.

Hits:
• Strong use of the connected app
• Very durable and well-made pieces
• Plays great as a solo game

Misses:
• Too expensive for a filler game if you don’t have kids
• Playing cooperatively doesn’t feel very satisfying