We review the new dexterity game Junk Art, by Pretzel Games. In this unique stacking game, players are competing a series of events that require them to create art from a variety of wooden pieces. 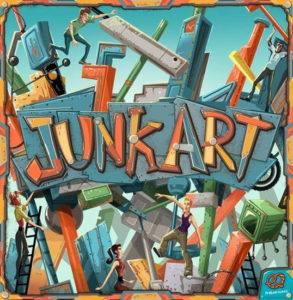 My gaming generally involves around playing with two distinct groups. The first, a small group of my close friends, focuses on mid-to-heavy strategy games. Sitting down for a three hour game with little or no luck is our idea of a great time. The other group involves many of the first group, plus my daughter, other family, and significant others of my gaming buddies. They don’t necessarily have the same outlook on spending a whole evening playing a game.

I find that dexterity games often are the perfect fit for that larger group. Most dexterity games work well at high player counts, they are fairly quick, and don’t require a 30 minute rules explanation to get going. And nearly everyone enjoys them. Junk Art was released at Gen Con this year and has quickly become one of my go-to dexterity games. It has a unique theme, great components, and a lot of variety.

In Junk Art, 2-6 players are traveling artists trying to install the best art projects in various cities. Three cities are visited each game. Each city has a slightly different twist, but all involve some method of stacking wooden pieces to form a sculpture and points are awarded in different ways. After the final city, the artist with the most points is the winner.

Junk Art is published by Pretzel Games in a very similar manner to their previous release, Flick ‘Em Up. The box comes in a hefty wooden box. Inside the box are 60 uniquely shaped wooden pieces. There are 15 different shapes in four colors. Although the pieces seem very oddly shaped at the beginning, they clearly have been designed to fit together in certain ways that makes stacking them much more interesting than similar stacking games where pieces are uniform.

There is also a deck of 60 cards, each depicting one of the wooden pieces, some point tokens, wooden bases, and city cards. And a tiny tape measure if you need to determine whose structure is the tallest.

Junk Art begins by randomly choosing three cities from the 12 available city cards. One of these cities requires a copy of Flick ‘Em Up, so for many, there are only 11 cities you can play. These three cities will be the only ones used in your game and determine the rules and scoring that will be used each round.

Each city is its own mini game. For instance, in Monaco, each player gets 10 cards from the deck and must flip them over one at a time. After flipping over a card, they add the piece to their structure. It is basically a speed game and the first player to get all 10 pieces to stay on their starting block gets the most points. All other players get points according to how many pieces they’ve added when the round ends.

There are many different variations. Some involve building on a common structure. A few cities only award points to the tallest structures. In some cities you will get bonus points for putting similar colors together. The rulebook breaks each city into a small section that makes it very easy to find out how to play whichever city happens to come up.

The best thing about Junk Art is that the game can be whatever you want it to be. Some of the cities have a push your luck element, or a speed element, or just pure dexterity trying to stack into the tallest structure. It doesn’t feel exactly the same from play to play and that really helps get it to the table more often. There are also blank city cards in the box so if you want to come up with your own rules you can.

My personal favorite city is Montreal. Each player gets three cards and chooses one to pass to the player on their left. The player must add it to their structure. If two pieces fall off your structure at the same time, you are eliminated. So you clearly want to give your neighbor pieces that are difficult. However, after three pieces have been added, players move to their left and now have to add pieces to that structure. So those terribly difficult pieces you passed to your left are now your problem.

On the downside, some of the games are clearly better than others. Gujarat, for example, ends when any player has 2 fallen pieces. It’s not impossible for this to happen in the first few rounds and the games ends very abruptly. These cities really shine when everyone has reasonably tall wobbly structures, but just as often they can fall flat.

That said there is no rule you have to pick cities randomly. Once you have your favorites it is easy enough to stick to them. Or if you want to play more than three cities in a game no one is going to stop you. Junk Art gives you the tools to play the dexterity game of your choice.

The components in Junk Art are fantastic. From a distance, the shapes seem like they could be literally anything – but it’s clear that a lot of thought went into what these shapes should be and how they fit together. Yet they are still cool looking enough that when you stack a bunch of them together, it does create a really unique looking piece of “art”. You do pay for those quality components, coming in at an MSRP of nearly $70, Junk Art is a bit of an investment.

I’ve had a lot of fun playing Junk Art with all kinds of gamers. We’ve had a great time playing it at the end of an evening after wrapping up heavier games. It works with family who wants to jump in and out of a game in just a few minutes. Everyone can participate and enjoy the different modes Junk Art has to offer. And if there is a particular city you don’t enjoy, simply don’t play it, there are plenty of other ways to play.

If you’d like to get a copy of Junk Art, you can find it online for about $50.

Final Score: 4.5 Stars – While it isn’t a ground breaking game, it does do a whole lot of things right and should appeal to just about anyone.

Hits:
• Awesome Components
• Various types of games in the box
• Can customize to what you want to do