Tony and Tahsin go head to head as they offer their differing opinions on the 7 Wonders: Duel Pantheon expansion. One loves it, one hates it, see all that this expansion has to offer the 7 Wonders Duel base game. 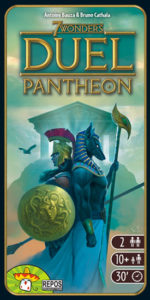 A few years ago, a video game design competition resulted in a huge controversy. The design goal was to make a game that would be like a religion. In a way, as board games get published and their fans accept the rules as something near holy scripture, expansions can come along to change the righteous text. Expansions can elicit even more fervor or change the direction or importance of certain game elements, thus changing the overall design.

Bruno Cathala with the recently released expansion for 7 Wonders: Duel has done precisely that. What’s ironic is that the changes to the game are seen very differently by two individuals here at Board Game Quest. In this exploration of the 7 Wonders: Duel Pantheon, Tony and Tahsin expound on their differing points of view in the hopes that readers gain more from the discussion.

7 Wonders: Duel Pantheon expands the game environment of 7 Wonders: Duel to include a new board for placing gods of varying cultures, cards for god powers, additional Wonders, new Progress tokens, and alternate Age III cards representing Grand Temples to the gods. As the players progress from one Age to another, additional choices can be made as to which gods are available and then how they are utilized.

In the first Age, Mythology tokens representing the different cultural pantheons are randomly placed on certain face-down cards. The player who reveals one of these cards takes the token and then gets the choice of one of two gods from that particular pantheon to place onto a Pantheon board that sits above the Military/Progress token board. The spaces for these god cards have money pricing on them, indicating the cost that the two players will need to pay to activate the god. Each space has two costs which differ based on how close the space is to one player or the other.

The display has room for six gods. Once five have been added, a sixth Gate card is added in the sixth available space.

The second Age allows players to take a new action. Instead of taking a card from the display, players may activate a god by paying the cost on the display associated with the god. These powers are similar to Wonder or Progress token powers. Some are listed below.

Anubis: Discard a card used to build a Wonder. That Wonder can be built again and the bonus ability used again (excluding victory points or other permanent benefits).

Aphrodite: 12 victory points at the end of the game.

Baal: Steal a brown or grey card from the opponent.

The Gate card allows players to draw the top god card from each Pantheon and select one to use. It also costs double the normal price of the space it occupies in the display.

The final Age of the game swaps the Guild cards from the original game for Grand Temple cards. These cards grant significant victory points to players who obtain these cards: 5, 12, or 21 points at the end of the game for getting 1, 2, or all 3 Temple cards.

Tony: When I first played 7 Wonders: Duel, I didn’t like it. And this is coming from a MASSIVE 7 Wonders fan. Seriously, I buy literally everything made for that game. But Duel didn’t feel anything like 7 Wonders (other than the art), and I had a lot of issues with it. However, I will say that Duel has significantly grown on me after many more plays. Even without the expansion, I like the game better than I did initially.

With that being said, I LOVE the expansion. A while ago I made a list of required expansions for board games, and Pantheon would easily have a place on that list. Why? Because, while it’s not perfect, it addresses a number of issues I had with the game. But I’ll get to that in a second.

Tahsin: Unlike Tony, I was more pleased with the base game. It quickly became one of my family’s favorite two player experiences specifically because it didn’t feel like 7 Wonders. The play really demands attention to your own overarching strategy and adapting to what strategy you’re seeing your opponent pursue.

Another player described it best for me. The original game is one of brinksmanship where players are pushing ahead for a main victory in terms of points, but the outside threat of a military or science victory could come into play. This tension really drives the core enjoyment for me with the game.

Tony: One of the issues I had with the base game was that the card pyramid can feel very forced. While you have options many times, eventually you are forced to take one card with literally no other choice. This can lead into situations where you basically hand your opponent a card perfect for their strategy with zero recourse. I hated this aspect of the game.

Pantheon address this in two ways: you either get a bonus for being the person that has to reveal a facedown card (choosing a god card, or a purchase discount) or you can skip choosing the card all together and buy from the pantheon. While not perfect, as those actions are limited, this does go a long way into addressing my issues with the base game.

Tahsin: Pantheon does definitely address the issue of forced play as Tony describes above, however, I never really thought of this as a negative. Some strategies involve compelling your opponent to defeat. The solution to the original complaint, as Pantheon implements it, is to introduce a completely new god power system, which I think is unnecessary and adds way too many special powers into the game. The Wonder powers are plenty but the expansion now demands calculating all the different options an opponent might have from the available gods.

Tony: I disagree with Tahsin here about the god powers. I love how they add variety to the game. Duel only pulls 3 random cards out each age, so I liked how the gods changed up the game. I understand what you say about strategy, but I don’t think the god cards are that significant to extremely impact the game. Many are somewhat minor in the grand scheme of things and I’ve rarely had a god card alter the course of the game enough to play king maker. As I said, they add a nice bit of variety to the game, all while opening up the game play so you are not such a slave to the luck of the card layout.

I will say that I’m not a huge fan of the Age 3 cards. I don’t feel like the Grand Temple cards are in improvement over the original guilds. While they do change the Age 3 strategy some, I think I prefer the guild cards. With the temples, the obvious choice is to grab one at all costs. They are that strong, especially in numbers. With Guilds, they are a lot more dependent on your current makeup and the choice there feels less forced.

Tahsin: Tony’s sentiments about the Age 3 Grand Temple cards are the one thing I think we agree on. Guilds build upon a strategy a player may have already been pursuing. Grand Temple cards feel like they’re more a forced lure for additional points.

Tony: As I touched on earlier, 7 Wonders: Duel Pantheon is a required expansion as far as I’m concerned. I’d never play the base game without it again. I love that it addresses one of my big issues with the base game, and also adds in some much needed variety to the game play. While I am not the biggest fan of the Temple cards, I don’t see any reason why you couldn’t just swap those out for the original guilds. This was a solid win in my book.

Tahsin: While 7 Wonders: Duel Pantheon is well executed; this is not an expansion for me. I’m normally jumping up and down for expansions for games I particularly love, but the changes in direction for this expansion really bothered me. The easier science and military opportunities don’t make it a better or deeper game. While I like some ideas, I would appreciate a direction that expands existing mechanisms rather than grapple with new ones which feel like unnecessary duplicates.

If you’d like to pick up a copy of the 7 Wonders: Duel Pantheon expansion, you can get it for about $20.