We review Wooly Whammoth, a light card game published by Smirk and Dagger Games. In Wooly Whammoth, players are trying to be the first to collect enough meat for their fledgling tribe. 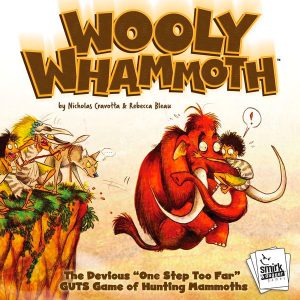 The life of prehistoric cave folk is hard. Foraging just isn’t getting it done anymore. Just a handful of nuts every now and then. But you really could go for a big fat steak and that mammoth next to the cliff is how you are going to get it.

In Wooly Whammoth, you’ll take control of a tribe as you attempt to hunt some mammoths to feed yourselves. Tribespeople will likely perish in the process, but such is the cost of hunting in prehistoric times.

You’ll take your group of four tribespeople on a hunting expedition. If you can successfully collect six meat tokens, your tribe will be well fed for the foreseeable future. Or, of course, maybe just be the last tribe that hasn’t run themselves into extinction trying to kill mammoths.

To accomplish this, you’ll choose a movement card to play each round. Each movement card shows a value and, in some cases, a special ability. First, the value from all players will be added together and everyone’s tribe person will move that many steps toward the mammoth.

If you end your movement on one of the final two spaces near the cliff you have successfully hunted the mammoth and earn a food token. Your cave person is still alive and allowed to continue hunting. Your board, however, is extended an additional space, giving you farther to go to successfully hunt.  You may run yourself right off the cliff, in which case your tribesperson dies, but you’ll harvest the mammoth anyway, so it’s not all bad news.

Each player also has a CHARGE! card in their hand. If one of these is played, after the movement is complete the mammoth will rush toward their would-be hunters. If your tribesperson is run over, you’ll have to start over with a new member of the family. If this didn’t sound difficult enough, there are tar pits to contend with. If you ever end your movement in a tar pit your cave person also perishes.

Wooly Whammoth is a light family weight game with a cute, although perhaps slightly morbid, theme. While the rules explicitly say you can win by collecting food tokens it’s more often a fight for being the last tribe with a living person.

Each turn you’ll pick a card with some knowledge of how far you want to go. If you are close to the mammoth, you’ll likely pick a low or negative number. The negative card also gives you the ability to ambush a charging mammoth, so you do have some protection potentially as you close in near one of their big animals.

There are a lot of unknowns though—like all the cards your opponents are going to play. The strategy here is clearly to look at their situation and make an educated guess. You can also see all the cards they’ve already played and the cards for all players are the same. Once you’ve played a card the only way to get your discards back into your hand is to eat one of the meat tokens you’ve worked so hard to acquire.

As the game progresses, those who have successfully hunted have a longer path to travel to get back to the mammoth. This serves as a bit of a catch-up mechanism but works thematically as you’ve presumably killed the mammoths closest to you and must venture out farther. With increased distance also starts to mean more tar pits to deal with as well, making things more dangerous.

If a player ever has their fourth person perish, they are eliminated from the game. In my experience, it has been more likely that the game ends by last tribe standing rather than collecting the required meat. Games with player elimination can be a bummer, especially for a family weight game that otherwise works pretty well for ages eight and up.

Even though player elimination isn’t ideal, Wooly Whammoth is a fun romp in the prehistoric forest. While it’s certainly high on cartoon silliness, there is enough to think about, especially with some of the card powers, to keep it interesting for all ages. You’ll have tense moments of staring down your fellow cavepeople trying to guess how far you are about to be sent hurling toward your likely doom.

I do wish the likelihood of winning by successfully hunting in Wooly Whammoth was more likely. Having to eat the meat tokens you need to win to refill your hand is a cool mechanism that gives you some trade-offs between having all the options and trying to win, but it feels a bit too punitive at times here.

Hits:
• Easy to teach gamers of all ages.
• A good mix of light strategy with plenty of unknown info.
• Extending the hunting board as mammoths are killed helps level the playing field.

Misses:
• Player elimination is a bummer.
• It feels hard to win by successfully hunting.