We review Wild Space, an engine-building card game published by Pandasaurus Games. In Wild Space, players have a limited number of actions to earn the most points over the course of the game. 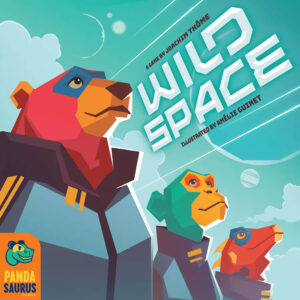 “Dude, you NEED to play this game! It is SO GOOD!” exclaimed Tony.

My curiosity was piqued as Tony doesn’t get excited by anything… except werewolves.

“What is the game?” I questioned.

“It’s about establishing a social network and growing your friend’s list. I only have one problem with it so far. EVERY game, no matter how I shuffle, my first friend is Tom.”

“No. What is the NAME of the game?” I clarified.

I looked down at the game on the table. It was still in shrink. It was called Wild Space.

“You sure you are playing the right game?”

He waved at me dismissively. “You can have that. I have My Space.”

I happily scooped up the game and was on my way.

Wild Space is a card drafting/set collection game where one to five players explore planets and build the best crew. Games play quickly, usually lasting no longer than 30 minutes. (Note: I did not try the solo mode.)

A game lasts ten turns. During each turn, players do the following:

It is that simple. Once all players have completed ten turns, total credits are calculated and the player with the most outstanding crew (actually, the most credits) wins.

My two favorite aspects of Wild Space are the tight ten-action limit and the card combos.

Each turn, you choose if you want to land one of your five ships on a new planet (there are two columns on each planet) or explore a planet you already landed on by moving it up the column. Once all five of your ships are at the top of a column, you have used all ten of your actions.

When landing, there is usually a cost, such as discarding a card, or a requirement, such as having a crew member of a specific type in your tableau. After paying the cost or meeting the requirement, you can use the action, normally either playing a card to your tableau or drawing cards from either the three face up crew cards in the market or the top of the draw pile.

Exploration is a simpler action. There is no cost. You simply move your ship up the column and either draw three cards or play one card. Yes, EVERY exploration action is the same on every planet. This assists with planning your turns as you know, once you land, that you have the option of drawing three cards or playing one.

This ten-turn limit and choosing to draw or play cards bring tension to the game. You have a limited action economy. Are you better served drawing three cards now, hoping to get the card you want for your combo, or playing a card that you already have? Remember, you only have ten actions!

Cards are the heart of the game. They are played to increase your crew size (this allows you to explore more planets), earn credits, set up future combos and/or continue a combo. There are three types of cards:

Most cards, regardless of type, have an ability (the key to combos) and, more rarely, be considered a veteran.

Finally, every player starts the game with a captain, which counts as an animal and as part of your crew. Each of the six captains has a unique Veteran Track that grants an immediate bonus when a veteran is played. The more veterans you play, the better the bonus.

Abilities are what drive combos. Similar to planets, some have costs or requirements to be activated. Once activated, you use that action immediately and the combo chain can begin.

I LOVE trying to puzzle out how to maximize my cards and when to combo and when not to. Why would you not play every card, every time? The example above is AMAZING! Well Timmy, while long combos are exciting, you may not have the RIGHT cards to score credits, that is why. You score credits by having each of the six animal types in your tableau as well as having three or more of the SAME type. In addition, the emissaries you have in play may influence the cards you play. You would play different cards if you had an emissary that gave bonus points for the most pilots versus having the most cards in your tableau. Finally, you may earn a bonus from your captain by playing several veterans. Remember, having the most credits wins the game, not having the largest crew.

My only “complaint,” which is really more of a gripe, is that I wish there were more planets with unique landing actions and costs. There are only ten planets included in the game. The two starting planets, as well as one of three “three crew” planets, one of three “six crew” planets, and one of two “nine crew” planets. Replay value would go through the roof with the inclusion of more varied planets. Hopefully, this will be addressed in a future expansion!

Wild Space will not be leaving my collection any time soon. It is our current “we only have a half hour, what should we play” game. Fast to set up, fast to take down and a whole bunch of card combos in between is the perfect filler. Figuring out your set collection strategy and then finally pulling off that combo you have been holding for eight turns is so satisfying. I HIGHLY recommend Wild Space!

Hits:
• Maximizing your ten actions creates the tension
• Card combos are so fun
• Figuring out what to collect as the game winds down is the enjoyable brain burn
• Fast to set up, fast to play, fast to put away – the perfect filler