We review Whistle Mountain, a tile-laying and worker placement game published by Bezier Games. In Whistle Mountain, players are trying to earn the most points buy using their airship to build a bridge in the mountain. 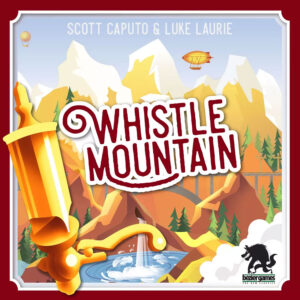 Ever find yourself pondering the next game to bring to the table, only to be inundated by the choices—oh, so many choices—that are beginning to take up space on your shelf? Ever glance over to said shelf to see if any option sparks joy, calls out to you “Pick Me! Pick Me!” or fills the air with the muffled screams of drowning meeples? If only there was a game out there that sparked joy and quelled the screams of hardworking meeples…

Enter Whistle Mountain from Bezier Games, a new tile/worker placement title that tasks you with saving your unfortunate meeples before time runs out, and so much more.

This medium-weight design from Scott Caputo and Luke Laurie emerges in the wake of 2017’s train hex tile pick-up-and-deliver title Whistle Stop. Yet, outside of a shared universe, the games have few other similarities. Whistle Mountain is all about gaining victory points while building scaffolding and unique machines that power your engine. As you build higher and higher, every worker meeple runs the risk of being knocked into the rising water.

The game utilizes several resources including water, iron, gold, coal, and the namesake wildcard, whistles, which are acquired by placing three unique airships on or near the central board. Setup includes selecting a powerful asymmetric starting ability and a polynomial scaffolding tile to place onto the board.

Collect – This action refers to placing an airship on the central board.

Forge – This action refers to retrieving airships and changing the state of the central board.

There are also bonus actions that can be taken during a turn by either playing a card or redeeming an award (special one-time abilities).

As the game progresses, scaffolding and machines begin to dominate the landscape and rise higher and higher. Worker meeples can be moved from the barracks onto scaffolding, which in turn can be transferred from a machine to a safe zone, or award ladder, to the right of the board and earn an award (more whistles? Yes!). The higher your saved meeple lands on the award ladder, the more points you earn.

The board features a central bridge illustration that signifies the start of a built-in timer of rising water that begins to cover up the lowest scaffolding and waterlogs the machines, making them unusable. This happens once a new machine is built above the bridge line. If you happen to have a meeple in the barracks or on a scaffold that is covered by water, they fall to the bottom of the board, where a swirling whirlpool gathers them up. If you’re unable to save these meeples by the end of the game, you lose five points per meeple. Yikes!

The ending is unique, as there is no round structure in place. Rather, once the water level reaches the max height, no more workers will remain in the barracks and the final turns will commence.

While it may seem like a lot to process, it only takes a few rounds to get the hang of the central mechanics, and a single game will find you mulling over the options you did or didn’t take. There are many starting powers to test, and as you develop your own worker placement engines additional variability and strategy emerge. Trying to determine the best placement for an airship, how to spend efficiently in a tight resource economy, as well as when to retrieve and build all make for compelling gameplay.

This is a game that embraces engine building, sometimes sparked by your starting ability, and finds unique ways to bring new life to the mechanics on display. In no time you’ll be flooded with victory points, not unlike the rising waters swallowing real estate around the board. The rulebook does an excellent job of laying out each action with vivid examples. It features a Tips & Strategies section, as well as a full glossary and icon reference. And the artwork and components are whimsical, especially the rising water mechanic that allows a horizontal tile to cover the components you’ve already placed on the board.

So where does Whistle Mountain struggle? Well, the theme may be the biggest deterrent for some. Airships, machines, mountains, and whirlpools… let’s face it, the theme services the mechanics more than the narrative. It’s goofy and disconnected, but ultimately fun if you can shake the screams of those workers you’ve failed to save by game’s end.

Rather than a score tracker, you’re stuck with victory point tokens that add up fast and furious as you combo another engine chain. By looking at the board and the outer docking elements, it’s easy to see why this choice was made, but it quickly becomes an annoyance as you spend time cashing in your hard-earned points for larger tokens to lessen the pileup.

Sustained play may find seasoned gamers quickly outpacing new players as strategy paths refine, but I do feel Whistle Mountain provides enough variety for anyone to dip their toes into new strategic waters at the edge of the whirlpool and still have a good time. Your mileage may vary in this regard—certain gaming groups that like to explore the design space will find a lot to like here, whereas the “meta” of certain groups may turn this game into an action selection cycle that even the most enticing starting player power cannot overcome.

Another thing to consider is how the variety of actions may lead to analysis paralysis (AP) for any in your group who struggle with making the best play possible. And while there’s not a lot of direct player interaction, the evolution of the central board does require all players to be watching each other’s turns to maximize their own.

A successful and fun mid-weight engine builder with quirk and style. Whistle Mountain has found its place on my shelf as a sixty-to-ninety-minute race to the top of the scaffolding. It’s unique enough to draw in new gamers looking for a next step, as well as satisfy salty seasoned veterans looking for a lighter plunge. Beware of AP and dive right in!

Hits:
• Engine building and combo chains
• Unique central board that allows players to create their own worker placement spots
• Variability based on which machines, upgrades, and starting powers come out
• Many paths to victory

Misses:
• Theme may not coalesce enough for some
• Victory point tokens rather than score track
• Potential AP due to open design space
• The screams of the drowning 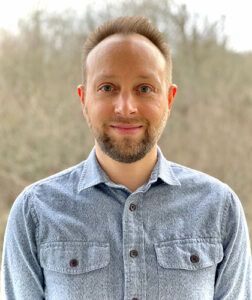 About the Author: Brandon has trained his entire life to be a member of the board game community. He’s climbed ladders and fallen down chutes. He’s investigated the most heinous crime scenes only to discover the murderer used a candlestick in the conservatory. And he’s fought on numerous stages of war, disarming bombs and capturing flags. And all this before the age of ten. Each and every game he’s played has pushed him closer to his destiny as a surveyor of gaming design and enjoyment. These days you can find him delving deep into mid-to-heavy Euros, as well as embracing new avenues of narrative structure and strategic mechanisms. His partner pushes Brandon’s capacity for strategy (she wins all the time!) while patiently tolerating the arrival of every new game on their doorstep. When not gaming, Brandon is a freelance editor, fiction writer, and true lover of cinema. You can follow him on twitter @truthwritten.