We review We're Doomed, a new party game from Breaking Games. The World is ending, and players are world leaders from various superpowers who are trying to build a rocket and secure a seat on it to escape their doomed world. 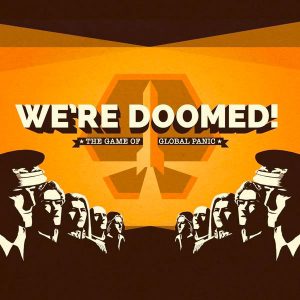 As gamers and game collectors, I doubt most of us ever look over our collections and think, “I really need more filler games.” But believe it or not these games are a necessity in any collection, especially when you have a short amount of time or are looking for something on the lighter side. Yes, you might not go out of your way to collect fillers, but having them can help any game night or event be a success.

This brings us to today’s review We’re Doomed! from Breaking Games. The World is ending, and players are world leaders from various superpowers who are trying to build a rocket and secure a seat on it to escape their doomed world. Is We’re Doomed! a great filler game to add to your collection? Read on!

We’re Doomed! is a filler/party game for 4-10 players which plays in 15 minutes or less and is best with 5+ players.

The second phase is the Contribution Phase. In any order, players bid their Resources to build the rocket by contributing resource tokens to the game box. The player who bid the most resources that turn is awarded 1 Influence and gets to draw an event card.

The game continues by phase until time expires and then play immediately ends. The resources in the game box are counted to determine how many seats were built and players individually count their Influence to determine who will be boarding. Players who managed to secure a seat can escape and any who did not are DOOMED!

We’re Doomed! is an easy game to pick up and play. The rules are straightforward, and it gets to the table fast. Most gamers, both new and seasoned, should have fun and be entertained. Plus, the 15-minute time limit does make this a nice filler game since you know exactly how much time you’re going to fill.

The Civilization cards each have different action bonuses which add some nice variety. You do have set choices of Civilizations by player count which is a good and bad thing in my opinion. I’m sure there’s some logic to which are included by count, but I was not a fan that at the 6-10 player count because the Civilization cards repeat (there are 5 unique cards total). I would have liked to see different ones to again add better variety and help replay value.

We’re Doomed! is a filler/party game that some might think is too short but it’s a fun-filled 15 minutes that will have many players laughing and enjoying their experience. All players should be warned before sitting down not to take it seriously and just have fun with it. Usually, I loathe player elimination elements like the Nuke action, but it makes sense for this quick game. Players will not sit long on the sidelines and will likely watch to see what happens until the end.

We’re Doomed! does need to have the “right” players to play it. Again, if players take it too seriously and purposely take slow actions then you may need to move to something else. This will likely sour the experience for others. This game is designed to be quick to play and there should be no analysis paralysis for any players.

What really adds the best variety and fun to We’re Doomed! are the Event cards. Even when you’re not the player drawing them, the anticipation of what might come is suspenseful. When the Event cards are Public, all players usually benefit or suffer but the Clandestine cards make you wonder what boon another might have received which could put a target on their back. Either way, these cards add an entertaining element that might add new rules or restrictions, give players secret missions, provide some or all with ethical dilemmas, and yes even have players do dreaded physical challenges.

The last thing to note that after playing We’re Doomed! many times it, unfortunately, can feel somewhat repetitive. The Event deck is deep so that’s not an issue. But since We’re Doomed! only has a 15-minute playtime and has simple and straightforward mechanics it can feel like the same game. So, be aware that this one can feel repetitive after a few plays.

We’re Doomed! is a fast and fun-filled filler game that should entertain all who are involved, especially those not taking it too seriously. The rules are straightforward and so We’re Doomed! is fast to the table. The Event deck adds great variety to mix up the rules while also adding individual or collective benefits and banes.

Unfortunately, We’re Doomed! duplicates the Civilization cards at the 6-10 player count which limits the potential for more variety in-game and its simple mechanics can make it feel repetitive. We’re Doomed! also needs the “right” kind of players to not take it seriously or hold up gameplay in this short, fast-paced filler.

Final Score: 3.5 Stars – A short fun filler game that is easy to learn and is fast to the table.

Hits:
• Easy to learn and fast to the table
• Fun-filled
• Event Cards