We review Warhammer 40,000: Fireteam, a squad level tactical game published by Games Workshop. Warhammer 40k Fireteam pits two enemy fireteams against each other for a quick and intense mission. 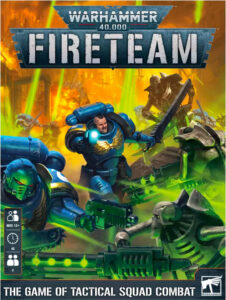 It was back 1987 when I first delved into the 40K universe upon receiving the Warhammer 40,000 Rogue Trader rule book. My friends and I generally did small scale squad level encounters that lasted a few hours. It was mainly due to limited miniatures being available at first, but new ones were released about every month after here in the states. The White Dwarf magazine was the best way to find out what was coming. Over the next year we were able to field decent sized Marine, Imperial Guard, Eldar, Ork, and Chaos armies and battle. I do miss those squad level games that didn’t take over 6+ hours and broke the bank.

Players will need to determine two things when first playing Warhammer 40,000: Fireteam, which fireteam to play and which mission.

A mission is played over 3 turning points and each includes the following 4 phases:

Final End Phase: each mission will specify when the mission ends but it’s usually on the third turning point. Mission victory is determined by the total VPs and ties are considered draws in most cases.

If you’re familiar with Games Workshop games, then it should come to no surprise that Warhammer 40,000: Fireteam production values and minis are excellent. You will need to build these unpainted minis but they’re all push-fit and have awesome detail once assembled. The rulebook includes assembly instructions as well as examples of what final painted minis can look like.

I was pleasantly surprised to find out that Warhammer 40,000: Fireteam was as described it’s a fast paced and streamlined skirmish game. The rules are easy to learn and master and unlike a typical 40K game you will not have hundreds of points of units to move, maneuver, and battle so again this game is very smooth and fast. The other thing that most gamers should like is that this game will not break your bank. Most new copies are around $50, and it does include 5 space marine and 10 necron minis which again is a pretty good deal given the expense of most Games Workshop miniatures.

I must let readers know something that I really liked was Warhammer 40,000: Fireteam comes with miniatures, Stratagem, and Datasheets for the 2 fireteams I mentioned above but also includes information (not miniatures) for 4 other fireteams. Each fireteam has different ploys that they can use on the Stratagem cards as well as different weapons and equipment. If you already have some 40K minis (or are willing to proxy) then you can easily try out the other 4 fireteams. This gives Warhammer 40,000: Fireteam a nice amount of variety and replay value that anyone should love.

The last thing I wanted to highlight from Warhammer 40,000: Fireteam was the campaign mechanic. This links quick skirmishes into a longer campaign where victory is not decided in just one battle but over the course of many. The victor will gain Special Issue Wargear as well as Special Operation cards that are specific to their fireteam. I really enjoyed the campaign I played—it exposed to you multiple missions and new aspects that the one-off skirmish doesn’t give you. Plus, the campaign isn’t too long either, so it took a few nights and 6 missions to complete it fully.

The only thing holding back Warhammer 40,000: Fireteam from scoring higher for me is the depth of the Targets of Opportunity deck. There are only 12 included and if you play a few missions, you will likely cycle through all of them, and some are kind of stinky to me. So, I found that in the deck of 12 cards there are maybe 8-9 I would want to use especially given the fireteam that I’m using. It’s simple, I want more of them and maybe some with 3 VPs because the deck is mainly made up of 1, 2, & 4 VP card.

I will be honest; I didn’t know what to expect from Warhammer 40,000: Fireteam but I ended up being surprised how easy it was to master the rules and how fast paced this skirmish level game was. This is another game from Games Workshop with excellent production values but the fact that the base game includes information to use 4 other fireteams was again surprising. This plus the campaign rules gives Warhammer 40,000: Fireteam a nice amount of variety and replay value. Plus, gamers should like purchasing a 40K skirmish game for about $50 where other Games Workshop products can easily be well over $100+.

My biggest issue with Warhammer 40,000: Fireteam is the depth of the Targets of Opportunity deck. There are only 12 cards and a deeper deck with maybe some 3 VP cards added would help replayability and variety in gameplay. The deck is good but could be better and more cards will lessen the repetition of this thin deck.

Final Score: 4 Stars – A fun and excellently produced fast paced and affordable skirmish game that I think the market wanted for years.