We review Warfighter: The Tactical Special Forces Card Game published by Dan Verssen Games. In Warfighter, players work together to control a team of special forces troops sent out on a mission. 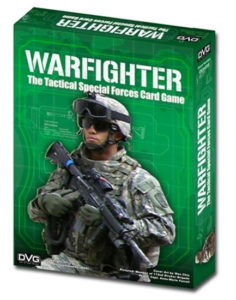 Games, like many art forms, tell stories. Even a really abstract game such as Checkers or Go tells a story in a binary format as if competing moral forces are adjudicating the world through conflict. Some conflicts are more nuanced and some themes rightly deserve a skeptic eye. For the soldier on the ground, there is no relativism. There are your friends, and there is the enemy.

Stripped of all the thematic garb of modern conflict, the game being reviewed today is essentially a group of good guys progressing through dangerous locations, fighting deadly foes, ultimately with the goal of reaching their objective and accomplishing a task. The modern garb mentioned is that of United States military special operatives engaging in missions on a small skirmish scale. And also, it’s a card game.

Warfighter: The Tactical Special Forces Card Game (Warfighter) is an adventure card game for 1 to supposedly 6 players. It seems to play best solo or with a partner. Each mission takes 30 minutes to play, but they can also be strung together to form a campaign.

The concept and gameplay of Warfighter is not complex. Players select a location and an objective. They then prepare for the mission by selecting characters, gear, and skills. Actions, dice rolls, and card draws during the mission determine the outcome as well as the randomized enemies. Of course, as a card game, almost everything is represented by a card.

Each player in the game can operate an individual character or a collection of commanded characters which have a more limited set of actions. Characters are worth a certain number of resource points, as are skills and gear. The total resource points the player soldiers have must not exceed the objective card’s value. However, players who wish to make the game easier can certainly exceed the amounts indicated.

Finally, combat is handled by pretty straightforward die rolls negatively modified by a target’s distance (number of locations away from the attacker) and positively modified by any skills the character has. Players roll ten sided dice to determine if the shot is on target, but can also be foiled by a six-sided die roll to determine if the attack hits a target’s cover instead.

A game round timer controls the pace and amps up the tension. If the players manage to reach the final location and achieve the objective through efficient action use and successful die rolls, the players win.

One year before Warfighter was released, Pathfinder: The Adventure Card Game debuted. Warfighter feels somewhat similar, but with a modern military theme. The two games share many similarities, however, Warfighter does not implement any deck-building in the design. It’s much more of a straightforward gun battle action management game.

This is where Warfighter breaks down on many levels. There really isn’t much going on in the game. There is a modicum of strategy and plenty of tactics, but overall the game feels like a repetitive romp from scene to scene fighting cardboard (figuratively and literally) enemies. Whatever tactical enjoyment there is in the exercise is lost by removing a map and miniature soldiers (even if they were small square counters).

Besides that complaint, there are some secondary criticisms. The overall quality of the game is not great. The card quality felt very thin and prone to scratch. The included dice are functional, but do more to encourage gamers to upgrade to the bullet shaped dice advertised by the publisher. The included “Tactical Display Sheet” is a main board with inefficient placeholders for location cards once the enemy cards are deployed.

The package sold is mediocre, but likely the core audience for Warfighter will not care. This is one of the few modern card games that takes on the theme of modern combat. Other wargames stick to hex-and-counter treatment. Even though Dan Verssen games should be awarded some accolades for this attempt, the end result here doesn’t surpass an average game experience. That is unless, again, gamers love the theme.

Gamers who love the play style of Pathfinder: The Adventure Card Game and were looking for the same play in modern military gear will appreciate Warfighter. For more discriminating tastes, there’s not much that will amaze. It’s an action-selection and roll and fight affair that wears out its enjoyment quickly. The stories Warfighter tells are no deeper than the movie Predator without the Alien. There are plenty more war games that can offer additional bang for the buck.

Final Score: 2.5 Stars – While it works sufficiently well for those who love the theme, it pales when compared to more modern games.

Misses:
• Flimsy game components
• Board layout issues
• Replay varies in theme but not much with gameplay