We review War of the Ring: Second Edition published by Ares Games. War of the Ring is a two player, epic game that lets players recreate the main events in the lord of the rings series. 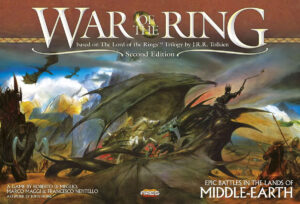 War of the Ring is a 2 to 4 player area of control and hidden movement game that takes about 2 hours to play. War of the Ring captures the epic battles between good and evil featured in the Lord of the Rings and the perilous quest of the fellowship of the ring as they try to avoid the Nazgul on their way to destroy the ring in Mt. Doom.

At the start of the game, each player will determine whether they will control the good or evil side. If there are more than two players, the factions are further divided for easier handling.

The game turn is broken down into 6 phases with most of the game occurring in the Action Resolution phase.

At the start of each turn, players will draw 1 card from the event deck and 1 card from the combat deck. These cards contain various effects and can affect fighting later in the action phase.

The second phase is deciding if the fellowship is revealed. This can have positive effects with rallying the free people of middle earth to help fight in the war but provides the evil player with intel in their hunt for the ring. This also ties into the third phase with the evil player committing some of their resources to try and track down the fellowship.

Players then roll the remaining dice in their pool and use the symbols rolled for different types of actions in the action phase. The action phase is where you can use characters, move units, recruit forces, fight battles, and generally play the game. After the action phase, the turns start over with drawing more cards for your hand.

This gameplay overview barely scratches the surface of the awesome set of rules for this game. I would highly suggest checking out the rulebook here if you want the full rundown.

There is a lot of great experiences I want to highlight with this game, which is possibly one of the best Lord of the Rings games you can buy. I’ll dive into the area control aspects first.

The very first thing I want to point out is that this is an area control game somewhat akin to Risk. There are strongholds and cities that help with defense but at its core, it is area control with “dudes on a map” sort of gameplay. You will spend most of your turn deciding on how to allocate the dice you rolled and what areas will need more units to take over enemy territory. This is critically important as it helps with both a conquest victory and provides safety (or danger) to the fellowship.

In one of our playthroughs, the good player was constantly being besieged by much larger evil armies, forcing them to keep footing on their bases to beat back the assaults and launch counter-offensives. As the good player, your hope of victory is truly in the hands of those hobbits as you cannot hope to defeat evil with your armies alone. Battles are determined much like Risk with sides rolling six-sided dice and using bonus cards and heroes to modify rolls.

An interesting aspect of the game is how different named characters, or the ring bearer, can activate and move different armies to a war footing. We really enjoyed that the heroes (or the conflict itself) had to move different Middle Earth nations to war.

Each side of the conflict will have named Lord of the Rings heroes that everyone loves. Once the Fellowship breaks, the different characters can separate and start using their powers across Middle Earth to help the armies of good hold back evil. The forces of good will eventually receive King Aragorn and Gandalf the White when certain conditions are met. While evil will initially start with some Nazgul, and through different conditions, unlock the Mouth of Sauron, the Witch King, and Saruman.

The second aspect is moving the Fellowship/ringbearers around the board secretly to move them slowly and safely into Mordor. This added a whole new dynamic to an area of control game I hadn’t gotten to play before. As evil, I constantly had to make the decision on how many dice I wanted to commit to the hunt for the ring, limiting my recruitment and moves during the action phase. The good player gets to declare where the fellowship is each turn if needed then removes the token from the board keeping me guessing on which paths, they would take to Mordor.

Trying to cut off the ringbearer’s traditional routes doesn’t always go as planned either. In one of our games, Frodo eventually ended up in Mirkwood and cut directly South, forcing me to pull armies from other areas of the board to cut them off and engage with the army (possibly) escorting them south. The result was evil being duped into less than ideal engagements and eventually allowing the good player to reach Mt. Doom.

War of the Ring is everything a fan of Lord of the Rings could want in a board game. It has strategic warfare where heroes can lead forces to victory and the legendary fortresses and cities from the stories will have a huge impact in battle. War of the Ring also has the hope of the free peoples pinned to the ringbearers reaching Mount Doom. The cat and mouse chase for the Ring keeps each turn exciting and influences a lot of macro decisions when armies are being recruited and moved.

Final Score: 5 Stars – A deep strategy area of control game with multiple aspects that keep it fresh and deserving of the Lord of the Rings brand.

Hits:
• Steeped thematically in Lord of the Rings
• Hunting for the Ring affects the area of control gameplay
• Characters and locations feel impactful

Misses:
• Combat feels simplistic if not in a core location or having heroes.
• Bad action dice rolls can limit what you can do over multiple turns.