We review UBOOT, a submarine simulation board game published by Phalanx Games. Players in UBOOT must work together to take control of a WW2 submarine and achieve their mission goals. 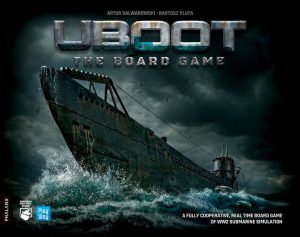 Ever since their introduction into modern naval warfare, submarines have captured my imagination with a mystique about them steeped both in reality and in pop culture. As a child, I can remember visiting the WWII-era USS Ling docked in Hackensack, New Jersey. I marveled at the cramped quarters, the loud alarms, and the soft-serve ice cream machine (quite literally, the most important piece of equipment onboard.) I re-read The Hunt for Red October until the spine broke, and that movie probably remains my most-watched film.

UBOOT: The Board Game, by Phalanx Games, speaks to me at a primal level, putting me on the deck of a World War II-era unterseeboot engaged in warfare in the European theater. All ahead flank, flood the ballast tanks, make your depth 25 meters and let’s dive in!

UBOOT: The Board Game is a real-time worker placement submarine simulation for 1-4 players, that plays in 90-120 minutes. We recommend UBOOT only with 4 players.

In UBOOT, players take on the role of four different officers serving on a German U-boat during WWII: Captain, First Officer, Navigator, and Chief Engineer. As a real-time game, actions are taken without a turn order, depending on what are the priorities of the officers at any given time. All decisions and actions are entered into a companion app that provides prompts and alerts, whether it be engine malfunctions, sonar contacts, or damage reports that require the attention and action of the players.

Each player controls a squad of sailors that they can deploy in the various compartments of the boat to take actions. Sailors can only perform a limited number of actions without resting or relief from a change in watch, so players must monitor their squad to ensure the availability of actions in case of unforeseen events.

The Captain is responsible for the overall command of the ship, procedures for torpedo launch, and keeping up crew morale. Guiding the overall tactics of the ship, the Captain directs the other officers on what actions they should be following. Torpedo management is a multi-step process that requires working with the other officers to get into a good firing position. Morale can be improved by sinking enemy vessels, but falls whenever sailors are overworked, injured or killed.

The First Officer takes charge of the companion app, handling all the input of all actions taken and announcing any of the events reported by the app. This player enters all course and depth changes of the boat, uses the periscope and binoculars to identify enemy vessels, and fires the large cannon at targets. The First Officer’s squad also sends and receives Enigma messages, as well as administers first aid to sailors.

The Navigator uses target information and orders from the First Officer to plot courses, both on a strategic and tactical level. Strategic navigation simply involves plotting courses between grid squares, but tactical navigation is required to put the boat in optimal torpedo firing position. By entering the U-boat course, the target course, and the target bearing into an Attack Disk, players can calculate the proper approach vector and relay that information to the other officers. The Navigator is also responsible for selecting and cooking food for the officers and men, which can have an impact on crew morale.

The Chief Engineer handles all damage control and repairs, as well as the engines and the ballast tanks. In order to perform repairs, the Engineer sends their sailors to the appropriate compartment to effect repairs. In the event of a hull breach, the Engineer must solve a puzzle of the submarine schematic before time runs out and the submarine floods. Sending sailors to man the engine room and ballast tanks allows the boat to change speed and depth as per the orders of the Captain.

In UBOOT, there are 8 missions to choose from that require you to achieve a variety of objectives, be it sinking merchant ships, navigating to specific waypoints, or attacking enemy combat vessels. Players can select a specific mission with a scalable level of difficulty or play through a whole campaign where they must keep track of the ship’s resources from mission to mission. In the end, players are given a rating based on their efficiency and success in meeting the assigned objectives, which they can use to track their progress and improvement over the course of multiple plays.

There is no doubt that the designers of UBOOT have a tremendous passion for the history of submarine warfare and poured all that love into this game. Intricately designed, UBOOT could possibly be the best submarine simulation board game currently published. While other titles might give you a surface feel for undersea warfare, UBOOT cranks up the level of detail to the max. Each officer’s role truly makes you feel the struggle of having to balance the priorities of your mission and your men.

Under normal circumstances, I tend not to mention game components, unless they either adversely affect gameplay or really stand out. In the case of UBOOT, it is clearly the latter, with a model of the submarine that sets a standard for components that is hard to match. Instead of a simple board, the submarine, quite literally, puts you in the ship, giving an immersive experience that is unmatched. The art on the player boards and on all the game components only serves to add to the experience. Even the maps, Enigma code sheets, and navigational tools have a level of detail that makes the production of UBOOT truly special.

Unfortunately, for such a beautifully produced title with such an immersive experience, getting UBOOT to the table may very well be nearly impossible depending on your gaming group. The rules are very detailed and complex, with a 52-page rulebook and an additional 20-page tactics guide. Add this lengthy ruleset to the asynchronous gameplay for each player, and you are left with a game that can take a very long time to teach, and then, an even longer time to figure out on the first playthrough. In addition, the complexity of each role made it extremely difficult to play this with two players, as each player would need to take on two officer roles, which was rather overwhelming.

While the authors of the rulebook maintain that mastering the basics of each role is easy and will allow a group of players to jump into a game, we found that figuring out even the fundamentals was a very difficult endeavor, with a constant need to refer to the rulebook. We found it to be cumbersome and brought gameplay to a halt, which is even more troublesome since UBOOT is designed as a real-time game experience. A better design choice might have been separate rulebooks for each officer focusing on their specific roles.

The other major issue facing UBOOT is the level of difficulty in meeting mission objectives. While the app gives you a score based on your efficiency and performance, in our plays of just the solo mission, we had very limited success on the Easy level and were roundly trounced at the Medium level. While it is a great idea to be able to scale the difficulty level for each officer position to account for varying levels of gamer ability, it cannot excuse the fact that it is simply a difficult game to play. While that might be attractive for some gaming groups, we found it to be discouraging when coupled with the complexity of the rules.

It is worth noting that the companion app for UBOOT is excellently developed, with a user interface that is easy to engage with and is visually stunning. The audio of sailors responding to orders in German, the sounds of the submarine spinning up engines and firing torpedoes only adds to the experience. It is a shame, though, that only the First Officer gets to experience and play with the app.

UBOOT: The Board Game is a truly immersive simulation of life aboard a German submarine during World War II, providing a realistic experience. The asynchronous gameplay for each role and the complexity of each role’s rules make UBOOT a difficult title to get back to our gaming table. Your (nautical) mileage may vary.

Final Score: 3 Stars – A deep dive into WWII era submarine combat, with an absolutely beautiful and commanding table presence, but a bear of a game to learn, teach, and play.

Hits:
• Realism in mechanics and components provides immersive gameplay
• App integration is unique and a model for future titles
• Availability of single-mission and campaign modes

Misses:
• Complex rules with asynchronous gameplay creates difficulty in teaching & learning
• Rather high level of difficulty, even with scalable difficulty levels
• Nearly impossible for any player count other than 4 players

Author’s Note: One of my favorite podcasts is Friendly Fire, a war movie podcast that critically analyzes war movies. Check out some of their episodes that relate to submarine movies: Run Silent, Run Deep, The Enemy Below, U-571