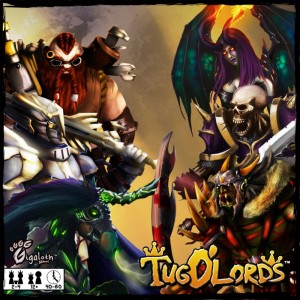 One of the more popular multiplayer online games right now is League of Legends. In League of Legends, players work as a team setting out to destroy the opposing team’s home base. It’s from this game that the designers at Gigaloth Games have found inspiration to create their Kickstarter project, Tug O’Lords. In Tug O’Lords, players take control of a deck of fantasy creatures and elemental spells in an attempt to move across the battlefield to destroy the other player’s castle. Can you take control of a faction and rule the land? Read on.

Tug O’Lords is a two or four player hand management card game that plays in 40-60 minutes.

The main objective in Tug O’Lords is to cause enough damage to your opponent’s castle and destroy it. The game allows players to choose to be one of six unique kingdoms: Knights, Demons, Undead, Elves, Dwarves or Orcs. The player’s kingdom cards are combined with a magical element deck (fire, ice, earth, and air) filled with spells and elemental creatures to form the complete players deck. Each round players will be able to place more creatures on the table and sling spells to help their creatures or hinder their opponents. Set between the player’s castles are four terrain cards that the player’s creatures will need to travel through and defeat any other creatures in their path to reach the opposing players castle. If a player is able to bring down their opponent’s castle, they will win the game and rule the land.

Players first decide on what kingdom and element decks they want to use. Each deck has fifteen cards that are shuffled together to create the player’s arsenal. Each creature card has information for that creature’s hit points, attack value, mana cost and unique ability power. The spell cards have the mana cost with a description of the effect of the spell. Each player’s castle card is placed on the table with four terrain cards in between, with the castle to the player’s left being their home castle. Each turn, players will start with six cards in their hand and go through these four phases.

1. Action
This is when players can get cards out on the battlefield. Players have a total of six mana that they can spend on this phase placing creatures into their castle or casting spells. Each card has a mana cost equal to the number of stars on the card. Players can play as many cards as they want as long as the cost doesn’t exceed six.

2. Combat
If players have creatures at the same terrain space, a battle occurs. If any player’s creatures have a before combat or during combat abilities they can be used to inflict more damage, boost hit points and other things that can help during the fight. Both players then total the attack values of each card at this space and their opponent must distribute that total of hits to their creatures however they wish. Any creatures with no hit points are removed from the board.

3. Movement
All current players creatures will move to the right equal to the movement value on the cards. Each creature must move if able toward the enemy castle, but never past a space where an enemy creature is located. If a creature ends its movement at the castle space, they enter castle combat. Each creature does one point of damage to the castle regardless of the attack value on the card and must distribute a total of two damage between all creatures at the castle.

4. Draw
Players draw back up to six cards and then it’s the other players turn.

Play will continue until a player has dealt five points of damage to their opponent’s castle. The game then ends with that player being the winner.

When I got the chance to look at Tug O’Lords, the theme really drew me in. I don’t hide the fact that I play D&D and having the chance to pit two kingdoms of familiar creatures against each other intrigued me. After playing the game, the theme and mechanics work together to create a solid game.

Tug O’Lords is very accessible to new players. The game rules are not complicated and turns take a very short time to complete. I was able to read through the rule book and teach the game in under 15 minutes. The theme might not draw everyone into it, but it’s not jarring or controversial that will divert people away. The only complication with learning the game is the abilities on each of the cards. Some of them are a little complicated and take a read or two to fully understand their power, but after you play a few rounds with a kingdom or spell deck, you will know the abilities. I do love the balance this game when it comes to the kingdom decks. They all have unique abilities and play differently than the others, but while I was playing I didn’t see one deck being superior to the others. Plus, each kingdom will play differently depending on which spell deck you add to it. This adds a lot of deck options for the players and increases the replay value to help keep the game fresh.

The game has a lot of ebb and flow to the action. There will be times when there are constant battles and then most of the creatures on the board will be killed. This will cause a cool down period where players will need to rebuild their armies. Due to the random nature of a card game, I found times where I couldn’t do much with the collection of cards in my hand. Other times I was able to blitz my opponent and quickly gets some hits on the castle. The spell cards do a nice job allowing you to cause havoc to the other players plans or aiding your creatures. We found the game plays well with both two or four players, and had an enjoyable time playing the game.

Overall, we had a very enjoyable time playing Tug O’Lords. The game has plenty of replay value with the multiple kingdom and spell decks that give the game a different flavor. The game is very accessible to non-gamers and doesn’t take a long time to learn. If you want to see which fantasy kingdom comes out on top, consider giving Tug O’Lords your support.

If you are interested in the game, it’s currently in funding on Kickstarter and scheduled for delivery in May 2014. A pledge of $29 will get you a copy of the game and any stretch goals. You have until Monday, December 16th to become a backer so head over today if you are interested.