We review Tiny Ninjas, a dice rolling and hand management board game published by 2niverse Games. In Tiny Ninjas, players are trying to be the first to defeat their opponent's clan. 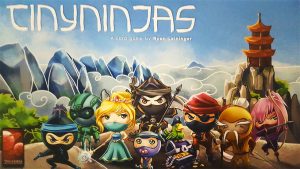 Zipping silently through the land, nimble ninjas make their way to the stronghold of their enemy. This army of stealthy assassins approaches your kingdom. Can you use wile and the powers of your own ninja to defeat them?

Tiny Ninjas is a hand management/push your luck game for 1-2 players that takes about ten minutes to play. It plays best with 2 players.

To set up Tiny Ninjas you’ll start by constructing the arena out of the game box. There are places included for card playing, dice rolling, special power counters, and your health meter.

Each player starts with a hand of five cards. The youngest player starts by assuming the roll of attackers and uses their hand to attempt to do damage to their opponent. Ninjas deal red or blue damage, generally based on a roll of one of the two dice – colors for one, numbers or B/W for the other. As an example, the first attacker might play a card that allows them to inflict veritable damage based on the color they roll on a die. The defender then has the opportunity to block this attack using the same color shield as the attack was, or a yellow defense card.

Some ninjas have special powers. Instead of, or in addition to, rolling you might be able to heal some of your own damage, draw and discard some of their cards, or inflict sneak attacks. On the defensive side, you might be able to block all incoming damage or recruit one of your opponent’s ninja for your side. Additionally, each player has a three-time use special power that is unique to the ninja they choose.

Cards are only drawn during your attack phase, so the trick is deciding how much to press your opponent and how much to save to defend yourself. Players that blow their lot on attack will have no ninjas to defend against the onslaught! The player that reduces their opponent to zero first is the winner.

Tiny Ninjas lives up to its name with a tiny footprint and quick playtime. The magnetic travel box is a fantastic lesson in thoughtful design – it’s compact, but unfurls to form a card tray and dice tray. The board is quite unique looking, as well as small and contained enough to be played on an airplane tray.

The initial games are a little slower as you learn the cards and powers, but after a couple of playthroughs, they’ll fly fast and furious, thrown almost like paper shurikens. The variable dice rolls for attack and damage offer a lot in the way of suspense and drama – you may be convinced you’re about to lose, only to have your opponent roll poorly through an entire hand of damage (as I did our last game).

The special powers may save you in a clutch situation, but you can’t build a strategy around them. It was funny to have someone trembling on the edge of defeat only to remember they could defend from the last hit, but none of us used them to press our luck too far. They are an interesting little addition, but they generally didn’t seem to have a noticeable effect on the game.

Since the dice are integral for most damage and defense numbers, part of the game is spent laughing about or crying over rolls. Fun as this can be for interaction, it can occasionally result in a slogfest game.

The art is really cute – tiny ninjas of all stripes, from baby ninjas and panda ninjas and pirate ninjas. (Yes, the pirates versus ninja question has finally been solved, and turns out it’s Pirate Ninjas.) Additionally, the whimsical box art is charming and the entire effect takes the game from cutthroat to playful.

Tiny Ninjas is a playful hand management game with a heaping helping of press your luck. Cute components keep it from seeming too brutal while varying types of dice rolls will change a powerful attack to a sad fizzle in the blink of an eye. The small footprint and great box organization make it a travel winner. Tiny Ninjas is quick to learn and fast to play, making it a great ‘waiting for the game group’ type game, or you can aim for a best out of X type battle royale.

Misses:
• Cards in the box, while held in place well, can be somewhat hard to see.
• A series of bad dice rolls can mean you’re slugging it out FOREVER.