We review the popular route building game Ticket to Ride: Europe. This new edition of Ticket to Ride makes some great improvements over the base game that is already a best seller. See what's new in this edition. 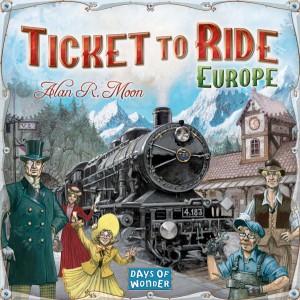 Whenever I visited my grandparents as a child, one of the first things I played with was their train set. They had a massive set of duplo trains for me to use and it was one of the highlights of my visit. I’m guessing that might have something to do with my enjoyment 0f the theme for Ticket to Ride. Today we will be looking at the second addition to the Ticket to Ride family, Ticket to Ride: Europe. In this edition, players are claiming train routes between cities of turn-of-the-century Europe instead of the United States. Is this game a worthy successor or should you stick with the first Ticket to Ride game. Read on.

Ticket To Ride: Europe is a route building and set collection game for 2-5 players, plays well at all player counts. Ticket to Ride: Europe plays in about one hour.

In Ticket to Ride: Europe players are attempting to claim train routes between great cities like Paris, London, Moscow and Constantinople (not Istanbul). In between each city, there are different colored routes linking them. The players will have to collect train cards that match the route’s color to claim it as their own. Victory points are acquired from claiming these routes and the longer the route the better. Players can also attempt to complete destination tickets by connecting one city to another with their trains gaining even more victory points. Each turn players will have to decide if they want to claim a route, take more destination tickets, add train cards to their hand, or place a train station. Play will continue until one player has only two train pieces remaining. Points are then totaled and the player with the highest total wins.

Just like with most Days of Wonder products, the components are fantastic. The train pieces have small details that makes them look like actual train cars. The artwork on the board is extremely detailed and has a weathered look that fits in with the time frame of the game. One major improvement to the base version of Ticket to Ride is the train cards. In the original game, the cards are about half the size of a normal game cards and I would occasionally have problems shuffling and holding these cards. Luckily for me, and many others I’m sure, they decided to increase the size of these cards to a more standard size. Overall, the components are top notch in this game.

At the start of the game, players we decide on a color of 45 train pieces and take five train cards for their starting hand. The rest of the train cards are placed next to the board and five cards are flipped face up. Each player will then be given four destination tickets and are required to keep two. Players then place their point tracker tokens on the outside scoring track the game can begin. Each player will have one of four actions to take on their turn.

1. Draw Train Cards
Players will be able to draw up to two cards from the draw pile or the five face up cards. If a player wants to selected a face up locomotive (wild card) they must select that first and forfeit their second card selection.

2. Claim a Route
When a player has a set of train cards that match the color and quantity of a route on the board, they can place a number of their trains on the route and claim victory points depending on the length.

There are two new additions to the route types in Ticket to Ride: Europe. These two route types are tunnels and ferries. Tunnels are outlined routes on the board and players are never sure how many cards they will need to claim that route. When a player wants to claim a tunnel route they place the train cards on the table and draw the top three cards off the deck. Players will have to play an additional card for each locomotive and train cards that match the cards used to claim the route. If a player can not produce the additional cards needed, they keep their cards from their hand and the turn is over. The other special routes are ferry routes that require players use one locomotive card for each locomotive symbol on the route.

3. Draw Destination Tickets
Draw three new destination tickets from the deck and the player must keep at least one of them.

4. Build a Train Station
This is another new feature to the Europe version of Ticket to Ride. Players will start with three train station pieces. These are placed on the city spots on the board and when played, this allows a player to claim one route claimed by another player in or out of that city. Players can use this to complete destination tickets but can’t use them for longest continuous route. For each train station a player doesn’t use, they gain four points at the end of the game.

The game will continue until one player has 2 or less train pieces in their stockpile. Each player will then get one more turn and the final scores will be calculated. Players will have gained points throughout the game by claiming routes. Players will show all of their destination tickets and gain points on the card if they have connected the two cities to one another or lose points if they have not. Players will add four points for each unused train station and a final ten points will be awarded to the player with the longest continuous path on the board. The player with the most points wins the game.

I have owned Ticket to Ride: Europe for a long time and it’s not a game that I will be removing from my collection anytime soon. The first time I played the game I was amazed at how quickly the rules could be learned. It takes little time for you to start understanding the nuances of this game. Whenever I teach any edition of Ticket to Ride to someone who hasn’t played board games for years, I tell them that I can get them to completely understand this game in three rounds. I have yet to fail at doing so. The game doesn’t bog down with complicated calculations or actions. With four simple choices for actions each turn, game play moves at a lightning pace. I have found very few people that don’t like the game after playing it numerous times. This is a great accomplishment for any game.

Even though the game has simple actions you can take, there are many different strategies that come into play. Players can chose to not complete many destination tickets and just go for the longest train routes to gain a ton of points that way. They can also have five or more destination tickets and attempt to connect all of them. I have found that it is a nice combination of the two that ends up winning most games. One feature I like is the lack of a hand size limit for train cards. This allows players the freedom to hold on to cards as long as they want before they start claiming routes. This is a major risk if someone manages to initiate the final round of actions, but allows you to claim a lot of real estate in a short amount of time.

I think the one thing that could turn people off the game is the fact in can be a very cutthroat game. Because there is a limited number of routes in between cities, players can quickly find themselves boxed out of going they way they planned. This is also a strategy that players can employ against their opponents by taking away routes that the other players seem to be going for on the board. Veteran players won’t have a problem with this, but people who are new to board games could be put off by this aspect.

Ticket to Ride is a game is fantastic, but the real question is which version should you buy. My vote is for the Europe version and let me explain why. One of the reasons is the edition of tunnels and ferry routes. The tunnels add a little suspense when attempting to claim a route. I have played games where it has taken me three turns to finally claim a two car route that I need. Sure it was frustrating, but it was a good laugh for the others at the table. In the USA version, I don’t find the locomotive cards being claimed when they were part of the face up collection. Ferry routes requirement to use these wildcards makes them much more important to the game.

I know it’s not the strongest of reasons, but I like the normal sized cards enough that it helps sway my opinion. Not having to shuffle around the tiny cards takes one of my major frustrations with the components of Ticket to Ride: USA away. My one criticism of the Europe map is that it uses turn of the century city names and I wasn’t familiar with all of them. The first game or two I had to look around to find exactly where they were. The train stations are a touchy subject because they make the game much less cutthroat because you can use other players routes. I personally like them because it gives people options if they happen to get cut off completing their destination tickets. The Europe map is super congested in western Europe with a ton of short routes that will be claimed quickly and I see why they added them to the game. Players will find themselves closed off much more in this map then the USA. The good thing is that they are not essential for the Europe map and can be removed from the game if the players want. I see the Europe map as an improvement to the first edition of the game that adds some new game play elements that I think improve the game overall.

Hits:
• Very accessible mechanics
• Fantastic artwork and components
• An improvement over other editions