“In war, not everyone is a soldier…” – side of the box, This War of Mine: The Board Game 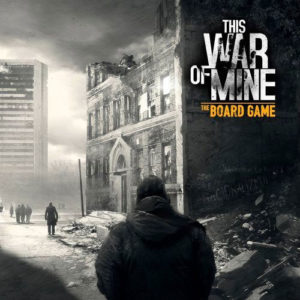 In November 2014, This War of Mine (TWoM) was released on PC, Mac and Linux. The game focused on the survival of citizens during the siege of a fictional city, although the creators of TWoM cited the Siege of Sarajevo as the influence of their setting.

The game was well received, spawned ports to multiple console and Android/iOS and was eventually licensed as a board game that successfully funded on Kickstarter in May 2016.

I really looked forward to playing This War of Mine because of its unique theme of being focused on the survivors instead of the soldiers during wartime.

Having neither played the computer game nor backed the board game, my review will focus on the retail board game only. In addition, my review will contain no spoilers outside of referencing general gameplay mechanics and the phases of the game.

TWoM accommodates between one to six players. As for game length, this will be discussed later in the review.

The objective of the game is to survive until the end of the siege. The game is played on a double-sided board (one side for the normal game and one for advanced) that represents the house that the survivors occupy. The phases of the game, consisting of a full day/night cycle, are as follows:

If the siege has not ended at dawn, another day/night cycle is performed. This will continue until either the game ends or the character(s) survive the siege.

While I enjoyed playing TWoM, I did not like it anywhere near as much as I thought I would. The combination of a thematic cooperative game should have been mana from heaven for me, but this game had several issues that kept it from being great. Everything I liked about the game was a double-edged sword that also had a down side.

Theme: The best aspect of the game, by far, is the theme. This is one of the most thematic games I have ever played. If you do not believe me, please read this post from a BGG user that lived through the Siege of Sarajevo, it’s very impactful. The choices you make can be downright difficult if you let yourself be immersed in the game. The struggle of finding food, water, and the right supplies to improve your home and balancing when to rest versus pushing your luck can weigh on you.

HOWEVER – You need to make sure that you play this game with people who are ready for what can be a depressing experience. This is not a light-hearted game of One Night Werewolf! The theme is dark and can have some disturbing scenes.

Game Rules: The game does not have an actual instruction book, but includes two different books. The first is the Journal, which walks you through the phases of the game. You simply open the Journal and start playing. When cards that are played direct you to the second book, the Book of Scripts (BoS), you turn to the entry of the 1,947 possible entries in the BoS and read that entry.

HOWEVER – After one playthrough of the game, the phases and what to do are nowhere near as daunting as your first time through. Relying on the summary level rules in the Journal tied to FAQ entries included in the BoS can be very frustrating. Luckily, BGG and the publisher have summaries of the FAQs that can be printed separately.

HOWEVER – the Scavenging phase is one of the most important phases of the game. It is when survivors choose one of three locations on the board and try to find supplies. The type of location is thematically tied to what has the best chance of being found (medical supplies in a hospital, for example). Unfortunately, the deck only includes 26 cards. This may seem like a lot, but midway through the first game I was already seeing repeat cards. After three full playthroughs, I would just rapidly flip through the cards and knew what each one was without reading more than its title. This deck should have been bigger.

Also, even with the amount of variability included in the game, I often felt pigeonholed in my decision making. For example, when assigning characters in the Evening, you usually post a guard because you don’t want your hard-fought supplies to be stolen. Most Evening phases for me were as follows: best fighter is on guard duty, the character who can carry the most is the scavenger, and the third character scavenges or rests if tired. Repeat this every Evening.

Game Length: This game is not a campaign style game. Each game is its own individual experience with no carry over from previous games.

HOWEVER – Our first game took almost five hours. Players need to be prepared to commit to the game. The box says 45 – 120 minutes. MAYBE if you play solo and have played many times and you get really lucky and win in two hours (or die in 45 minutes).

HOWEVER (this is the third edge of the sword…?) – The game has a GREAT save system for packing your game up and setting it back up at a later date. It works really well and I used it multiple times. But the moral of the story is that you will need to prepare players for a non-campaign game that can take as long as a campaign game across multiple sessions.

I really wanted to love This War of Mine. It is a unique theme in a market that is being over saturated with games using common themes/mechanics that include a slight tweak to create a new game.

At best I enjoyed This War of Mine, but it will not remain in my collection. Please do not get me wrong. It is an amazingly thematic experience. Unfortunately, I did not find that the game maintained its fun after three complete playthroughs. It began to feel repetitive to me. I found myself looking forward to some of the phases of the game while dreading others.

That being said, I think everyone should at least play This War of Mine at least once because it is getting increasingly rare to find unique game experiences.

Final Score: 3 Stars – An incredibly unique and thematic game that could use a bit more variety in some of the phases.

Hits:
• Very thematic game
• Some choices can be legitimately difficult to make
• Save system allows plays over multiple sessions

Misses:
• Can get repetitive, especially the Scavenging phase
• Game length can be an issue
• FAQs for each phase of the game are buried in the Book of Scripts