Board Game Review by::
Brandon Bryson 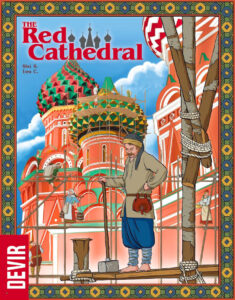 There’s no denying it. It’s right in his name. Ivan the Terrible was a—ahem—terrible person. The first Tsar of Russia repressed the people, created the secret police, waged wars, and even (supposedly) killed his own son. There’s also a legend that Ivan the Terrible blinded architects after they completed the famous St. Basil’s Cathedral, our titular structure. This was deemed necessary so they could not replicate such a beautiful structure. It’s been determined that this is likely not true, which is super great to hear because we’re about to take on the role of architects replicating the building of the great cathedral. By order of Ivan.

The Red Cathedral was released in 2020, is published by Devir Games, and was designed by Sheila Santos and Israel Cendrero. It plays from one to four players with a game length of approximately eighty minutes. So why is everyone looking so hesitant? Let’s jump right in and hope we have our eyesight before all is said and done.

Each game features a central Market Board, a Cathedral Construction site that’s determined by player count, and a random combination of cathedral cards, as well as a personal player board. Players take one of three actions each turn: (1) Claim a cathedral section, (2) Build sections of the cathedral, or (3) Acquire Resources from the market. Play continues until one player builds their sixth section of the cathedral, thus triggering the end game.

Ivan is watching, so we should explain how to get this thing built. Players can claim a section to build by taking an action to place a banner from their inventory onto the lowest unclaimed level of any cathedral column. Doing this locks this section into place so only that player can build it. And this is important because the more sections of a column that you build the more points you score. This action also gains you a workshop tile that you can use to power up your market dice if you choose to purchase it.

Ivan’s breathing got heavier. Is he impatient with us? Well, we need help so let’s talk about how to gain materials. The most involved action is acquiring recourses from the market. There are three sub-actions that you can take in any order during this action. They are:

To obtain resources, players choose a die to move the number of pips indicated around the market board. Wherever the die lands determines which resource is gained and the number of resources gained is determined by how many dice are in that area. The quadrant you land in also determines which of the four guild cards you’re able to activate. The four guild cards are randomly selected from a set of three options. Benefits include but are not limited to paying for more resources, gaining coin, exchanging resources, or gaining points.

It’s crucial to note that each personal board has a limited inventory of ten spaces, four of which are occupied by claim banners until you can get them onto the cathedral. As such, the decision of diversifying building materials yet monitoring inventory levels is key. These boards also house the workshop tiles that provide a bonus based on which color of die you moved.

As players gain the necessary resources, they can spend a turn building onto the cathedral. Only three resources can be moved from a player board onto the cathedral. This may be enough for some sections, but others require more than three and thus necessitate more actions. The coin and/or point benefit is typically much better for these.

Ivan is walking this way, so let’s just move on to scoring. You score a point for every five materials you have left over after game end. You also score based on each finished section of the cathedral, as well as the decorations you’ve added. Decorations are doors, arches, and crosses that can be placed on the base, middle, or top sections, respectively. Whoever has the most value for an individual column gains all the points in that area, while lesser values also receive lesser points.

There are plenty of aspects to this game that I’ve not yet mentioned. For a smaller boxed game, it’s packed with quality components and a meaty ruleset. Even the market board and card illustration from Pedro Soto and Chema Román are excellent, though the player boards are more functional than eye-catching.

Gameplay moves relatively fast as two of the three actions are rather simple. Claiming feels more like moving your chess piece into place, and while you get a potential benefit with a workshop tile, it can feel a little lackluster in comparison. The build action requires you to shift resources to the cathedral and when the specific materials are in place, the section flips over to its completed side, and you gain the benefits. The addition of adding decorations as a part of the build action does make it more involved and requires precise timing for peak efficiency.

The most enjoyment comes from the market board. It’s there that you ponder which dice look most appealing, which guilds can improve your engine, and which workshop tiles give you a boost. This portion of the game is the big wheel that turns everything else and it’s here where players can find intriguing combos. They can also spend coin to gain virtual pips on their personal die color (or the neutral white die) to go further along the market. This mitigation is welcomed and leaves plenty of options each Acquire turn.

The inclusion of the four different guilds brings flavor to the system and gives each session even more variety. And while there are plenty of card combinations to explore, it becomes apparent that more guild cards are needed to extend the life of The Red Cathedral, as essentially the four guilds all provide similar benefits within their respective decks. One area of the market board that brings a little annoyance is the need to re-roll all dice in the section where you landed. This is something that breaks up the game flow and is easy to forget, even if it is an essential refresh that staves off analysis paralysis. It’s recommended to put the die you moved onto the resource token as a reminder to roll before placing dice back into their proper area.

Okay. Ivan is coming. He’s walking straight toward me with something akin to fury. Maybe? Is he worried about something? Did he notice a flaw in the construction? Are we going too slow!? Do my clothes look too clean or are they too dirty? “You, architect,” Ivan grumbles. His eyes monitor my reaction and my hesitant nod. “Look at this column.” Ivan points to a domed section that both he and I know I’m responsible for constructing. I think I’m shaking. I’m about to pass out. “It is glorious what you have done here.” I don’t know what to do or say. “Truly. You should be proud.” And that’s when Ivan the Terrible brings his arm up, his hand flattened, suggests I do the same, and we slap our hands together mid-air. And that’s another thing Ivan the Terrible created. The high-five. What a horrible human being.

Give The Red Cathedral a shot. It’s quite fun and will remain in my collection. I’m excited to dig into the upcoming Contractors expansion, which was released at GenCon and will be available soon. I’m hoping it brings enough to the mix (there are more guild cards coming, so that’s a plus) to give it even more longevity. I’m also hoping an official difficulty adjustment will be released as the solo mode is intuitive to navigate. Devir continues to release quality games. Me and Ivan, we’re impressed. And look at that, I still have my sight.

Final Score: 4 stars – It’s easy to see that The Red Cathedral remains as wonderful in board game form as the beauty of its real-life structure suggests.