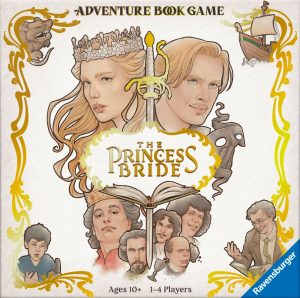 I remember waaayyy back when during my younger days when a friend told me we should watch The Princess Bride. Being about 10 years old or so at the time, I was hesitant to watch a movie about what sounded like a wedding with lots of kissing. I mean, why watch this when we could watch Star Wars for the 300th time. But I relented and, of course, I loved the movie (most likely in my top 10 of all time).

Since then, there have been a few publishers to try and make a Princess Bride board game. They have all ended up being either forgettable or really forgettable. But these days, thanks to some great offerings from Ravensburger, Fantasy Flight Games, and Funko Games, licensed board games have finally become something to look forward to, rather than dread.

In The Princess Bride Adventure Book Game, you and your fellow players work together to advance the plot of the movie and tell all six chapters despite the interruptions from a sick grandson.

Wait “Is this a kissing book?”

Each chapter will have its own set of rules and tasks for the players to complete. You’ll start out with Buttercup and Westly on the farm as he sets about his chores.

“Farmboy, Fetch me that pitcher.”

On a player’s turn, they may move a character two spaces or two characters one space. They can then take as many actions as they want. These involve trading cards with other players, discarding cards to move extra spaces, or doing story specific actions. The main goal here will be to complete the challenges of the chapter. Most require certain characters to be in specific locations and then you must discard the required story cards.

For example, the “No More Rhymes I Mean It” challenge in the second chapter requires Indigo and Fezzik to be in the same space, and a player to discard a Love and Intrigue card. Doing so will complete that challenge, possibly opening up new ones. Complete all the challenges for a chapter and you move on to the next one.

At the end of a player’s turn, they draw two story cards back into their hand and also reveal a card from the plot deck. The plot card will do bad things in various ways, depending on the current chapter and what number was on the drawn card.

If you ever can’t draw a plot card, or fail a chapter, the Grandson interrupts the story.

“Murdered by pirates is good…”

If he interrupts the story a second time, the players lose as he goes back to playing his video game (Hardball! from Accolade for those that enjoy trivia).

If the players make it through all 6 chapters, they win the game! Inconceivable!

Doing a quick search through BGG for “The Princess Bride” shows about 14 entries for a Princess Bride board game. Even though I haven’t played every other game on that list, The Princess Bride Adventure Book Game leaves them all behind. If you are a fan of the movie—and how could not be—this is the game for you.

And what drives the entire game is its theme. Some licensed games use the theme as a crutch simply to sell more copies to fans. The Princess Bride Adventure Book Game is about as far on the other end of that spectrum as you can get. As a reviewer, I loathe to use the term “dripping with theme” as it’s about as cliche as you can get. But game designer Ryan Miller was clearly a massive fan of the movie and his love of it comes through in every aspect of the game. This is a game about telling the story of the movie on your tabletop. Every component is littered with quotes from the movie as the nostalgia is dialed up to 11. It’s a game where the mechanics take a back seat to a recreation of the events of the movie.

Speaking of the mechanics… they are fine. There is nothing new here that you haven’t seen before. It’s hand management and set collection. The card draws are a way to add an element of risk to the game. It’s a randomizer to be used instead of dice. The game does offer up a few special cards here and there to help with the luck mitigation, which is nice.

One thing I noticed from my plays was that the game also gets easier as the player count increases. A solo player is only ever going to have a hand of four cards to choose from to complete challenges. But the more players you add, the more hand of cards you have to find those needed cards. The game doesn’t really have anything in the way of player scaling, and since you don’t have a personal character to control, it’s definitely easier to play with more players. This is also a game that can definitely be prone to quarterbacking. Now I’m firmly in the camp where that is a group problem and not a game problem, but use that info if it applies to your circle of friends.

Frankly, my only real area of concern for The Princess Bride Adventure Book Game is its replay value. Unlike, say the Back to The Future Board Game that has randomized challenges to make each game feel a little bit different, you’ll be doing the same exact thing in every game of The Princess Bride. Chapter 3 – the Cliffs of Insanity will always require you to do the same tasks in the same order. So I do worry that after a couple of plays you’ll have seen all this one has to offer and only pull it back off the shelf when nostalgia strikes.

I can easily say that this is the definitive Princess Bride board game. It’s the best game I’ve ever seen to use this theme and it’s not even close. The Princess Bride Adventure Book Game is a love letter to fans of the movie shouting “play me on your tabletop and re-live the movie… quotes and all.”

If you are some person that hates enjoyment and doesn’t like the movie, well then this definitely isn’t a game for you. But for fans of The Princess Bride, it doesn’t get any better than this. You’ll relive the movie, one chapter a time, hitting all the high points as you go along. The only pause I have in recommending this one is how well it will hold up after a few plays. I’ve played this one a few times already and I’m definitely ready to shelf this one for a while. But if that’s not a concern for you then go for it. You won’t need to blathe other players to have fun with this one.

“Anybody want a peanut?”

Final Score: 4 Stars – Looking for a board game based on The Princess Bride? This is the one you want.

Hits:
• Excellent use of its theme
• Accessible mechanics with minimal setup
• Nostalgia strong on this one with quotes everywhere

Misses:
• Plays the same from game to game
• No player scaling