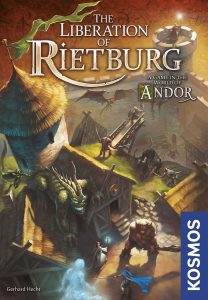 Back in 2012, publisher Thames and Kosmos released a cooperative board game called The Legends of Andor (designed by Michael Menzel). It was a unique adventure game that went on to win the Kennerspiel des Jahres award. Since then, there have been a number of expansions for this game to allow people to return to that world with more monsters to fight and adventures to experience.

Today, we are going to look at one of the first offshoots from that universe in the form of The Liberation of Reitburg. Players must work together to expel Gors, Skral, and other monsters that have invaded King Brandur’s fortress.

This card-driven game has players each controlling a unique hero from the world of Andor. On a player’s turn they have two choices, they must either play a card from their hand or retrieve all their spent cards, which also “advances the story”.

When playing a card, the player must choose which group of icons to activate. Icons will let players move to different locations, reveal monsters, fight monsters, or perform other character-specific actions. For the most part, you’ll be moving to one of the six locations and trying to remove a monster card by having a fight score equal to or higher than the monster’s value.

When players need to retrieve their played cards (most heroes only start with 3 cards), they must first play a narrator card which will add monsters to one or more locations.

Once you’ve removed all the monsters from a stack, the task card will be available. Flipping it over will show what needs to be complete to clear that location. These vary in complexity but range from having no more than 4 cards at any one location, to needing to spend X monsters from your trophy gallery, to defeating a boss level monster. If the players can clear 4 of the 6 tasks by the time the last narrator card is drawn, they win. If they ever need to draw a narrator card and the deck is empty, they lose!

As much as I would expect from an Andor game, The Liberation of Reitburg definitely has a puzzley nature to it. In the Legend of Andor, you couldn’t just cruise around and slay monsters because eventually, you’d run out of time. The same holds true for this game. You need to have a plan of attack, and also coordinate it with your teammates. For the most part, you are only going to have 3 actions between narrator card pulls, so action optimization is key here.

One thing I really liked was the variety of the heroes. They all approach the game just a little bit different. There is the dwarf who has an ax that goes from one super-powerful hit to just a steady boost to attack. And you have a wizard who needs to play spell books for many of their actions, and then there is the druid who has a companion water elemental that boosts all the attacks at its location. All told there are 6 different heroes that each have their own playstyle.

The other nice thing is that the game provides a few ways to scale the difficulty. If you like your coops to be ultra-hard, the game provides tougher monsters you can throw in to up the challenge. If you like your coops to be on the easier side, or are playing with little ones, then the game lets you not only leave those monsters out, but skip any narrator cards that have red sections. I really appreciate it when coop games provide this level of customization to the experience.

Overall I’ve found The Liberation of Reitburg to be really enjoyable, but there were a few bumps in the road. First, the game can be really swingy. Sometimes you’ll reveal a task card that there is just no easy way to accomplish. You might need X number of monsters killed, but you have to wait for those monsters to actually show up (if they ever do). Then other times you might have two task cards that are basically the opposite of each other, so you can’t really complete both. Yet there will also be times when you reveal a task and its already complete. While this kind of variety in the tasks does help the replay value, it makes for some uneven experiences.

The other issue we ran into was that some of the cards were either vague or poorly worded. That left us scratching our heads with rules questions that the rulebook never cleared up. Thankfully it’s a cooperative game, so we ended up just making a ruling and moving on. But for sticklers who like their ruleset to be crystal clear, that’s not always the case here.

Overall I enjoyed The Liberation of Reitburg. While its gameplay isn’t wholly unique, it does create a fun little puzzle that’s enjoyable for a quickplay. For gamers, this works nicely as a filler game to play at the end of the night. For families, this is easily something you could play with your kids as the reading requirements are fairly minimal. The Liberation of Reitburg is definitely an under the radar title that’s worth checking out and should be good for a solid amount of plays before it goes stale.

Final Score: 3.5 Stars – A good, puzzly game with some nice replay value and a diverse lineup of heroes.

Hits:
• Six unique heroes that have their own play style
• Easy to learn rules
• Able so customize the difficulty level

Misses:
• Rulebook could be clearer
• The game can be swingy at times