We review The Expanse board game from WizKids Games. In The Expanse, players are fighting for control of the star system using four factions found in the original Expanse novels and television series. 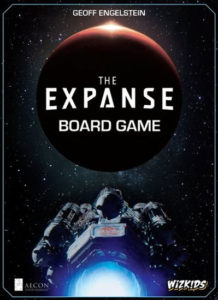 In 2011, two novelists under the pseudonym James S.A. Corey published Leviathan Wakes, the first in the Expanse novels, a science fiction saga taking place in a future where humanity has colonized the Solar System, with Earth and Mars as the superpowers, and the disenfranchised and exploited Belt poised for a rise to rebellion. The series was picked up by SyFy as a television series, boosting the signal to an even wider audience and receiving critical acclaim in its own right.

The board game of The Expanse puts you in the middle of this future, taking the role of one of the factions looking to exert their supremacy over the entire solar system. Does The Expanse have what it takes to influence the universe of sci-fi board games, or does it sail off into the black? Keep reading to find out.

The Expanse is an area control game for 2-4 players that plays in about an hour. The Expanse plays best with 3-4 players.

In The Expanse, you take on the role of one of the factions vying for influence and control of the solar system. Each faction has their own unique powers that give them an advantage in some aspect of gameplay and scoring. Each faction starts with fleets deployed and a small amount of influence in the solar system areas. The player last in the initiative track takes control of the Rocinante, giving them an extra fleet and some special powers (discussed later.)

On a player’s turn, they have a few regular options for play:

Selecting a Score card from the event track triggers a scoring phase. The player who triggered the scoring round secretly selects one of the sectors as the bonus sector, which provides more points for influence there. Players may then play a kept event (or activate the Rocinante events, if they control it). Influence is counted up for scoring, with points awarded for having the most influence in the various areas of space. Areas score 1 point for the faction with the most influence in them, while the areas in the bonus sector provide greater point values for first, second, and third places. Each area also has a possible bonus if it is of a faction’s favored resource type. Players then can build a new fleet, reveal technologies that give them new options on their turn, and control of the Rocinante shifts to the player in last place.

After six scoring rounds, the faction with the most points is declared the winner.

The Expanse provided quite a bit of strategic depth in such a short play time. Play times are reasonably accurate, with a tight and tense 45 minutes with two players, up to around 90 for four. We found that while we enjoyed the tight, chess-like nature of the game with two players, we felt that the game truly shined with four, providing more conflict as players attempted to control various areas of the solar system.

The scoring mechanics in The Expanse will be familiar to anyone who has played Twilight Struggle, as they are similarly based on the amount of influence in the various areas, but with enough twists based on fleet strength and resource type to make the game system stand on its own. It is elegant and simple enough to comprehend quickly to new players. A bright point is the bonus sector selection – each sector can only be selected twice, so it forces players to attempt to spread their influence all over the system rather than turtle up in one sector.

For a game with what appears to be a simple mechanic of selecting a card for its effect or its action points, there is quite a bit of depth in decision making on each turn. A player needs to determine in the short and long-term whether it’s worth it to use a card for its action points, allowing another player to potentially use that card’s effect. Keeping track of where each player on the initiative track became vital in determining which player would be most likely to use a card for its event. On the flip side, using a card for its event sends a player to the bottom of the initiative track, changing the dynamics of how events resolve.

The license of The Expanse is one that excited our players as fans of both the novels and broadcast. The asymmetric faction powers were true to the novels, with Mars being stronger in ship technology, and the OPA being able to rally influence all over the outer planets, and the like. The technology cards added to the reality that each faction had their own strengths and weaknesses, with gameplay for each requiring some flexibility to use those powers effectively. All the familiar faces from the stories were present, with the crew of the Roci, beloved characters like Bobbie Draper and Semi showing up.

For such a dramatic universe of space opera, the action in The Expanse fell somewhat flat as it related to the theme. While the tactical decisions regarding spreading influence, fleet movement, and gaining points were interesting, the game never felt like I was engaged in a struggle for control of the solar system, but rather just moving cubes around. The graphic design and production of the game does not help this at all, with the board art being generic and the components being standard wooden cubes and cardboard chits. While it would have added to the price tag, some better components and art could have made this game even more immersive.

It also needs to be mentioned that all the factions are not available for all player counts. In a 2-player game, players are required to play either Mars or Earth, with no options to play either the OPA (open to 3 players) or ProtoGen (open to 4 players). While this can be house-ruled, it’s a bit of a limitation on the game if you do not have a full group when this hits the table.

The Expanse is a solid area control game, with players required to balance both short-term goals and long-term strategy. The different factions each have a different feel that is faithful to the novels and series, and many of the characters and events appear in one form or another in the game. The gameplay in The Expanse is great, but the theme needs better expression.

Final Score 3.5 Stars – A solid game, but a bit of a letdown for anyone who is an Expanse novels/series enthusiast.

Hits:
• Asymmetric faction powers faithful to the source material.
• Gameplay is straightforward
• Depth of strategy and tactics is high for each decision in-game.

Misses:
• Space opera theme does not come through in gameplay.
• Not all factions available at all player counts.
• Graphic design & components need improvement.