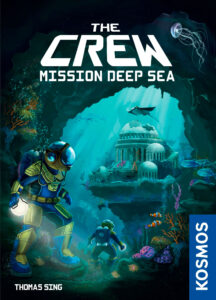 Upon entering Board Game Quest Headquarters the other day, I instantly noticed that the usually bright lobby was dark and there was an unexpected chill in the air. The reception desk was unattended, which meant no witty repartee with Lucas, BGQ’s quick-witted office manager.

Without a sound, three figures in burgundy cloaks appeared to my left, each one wearing a hood pulled all the way forward to cover their faces.

“Come with us. You are about to take your first step into a larger world,” one of the cloaked figures said to me and the fact that he was quoting Obi-Wan Kenobi made it clear that it was Andrew Smith under that particular hood. I was hesitant to comply, but if I’m being honest this wasn’t even the strangest experience I’d had to start a Tuesday morning at Board Game Quest. I shrugged and followed.

A different guide turned in my direction and there was enough light in the hallway to illuminate the strong jawline underneath his hood. The jawline clearly belonged to Dylan St. Clair.

“It’s time you joined our faction,” Dylan said. This could be a train-game thing, I concluded. (Dylan loves train games.)

Andrew and Dylan led us into a small room with just a card table at its center.

“In this room, we only play trick-taking games,” said Andrew, handing me a copy of The Crew: Mission Deep Sea, “and this is your next review.”

“Okay, cool,” I replied. “But I’ve never really played a trick-taking game before.”

“You’ve never what?!?” yelled the third person. The level of disgust in his voice made it clear this was Jason Kelm even before he ripped his hood off in anger. Their cover blown, the other two men removed their hoods and ushered me toward the table. A larger world indeed, I thought as I heard the click of the door behind me.

The Crew: Mission Deep Sea is a cooperative trick-taking game designed by Thomas Sing for 2-5 players in which players work together to ensure specific members of the team will complete various trick-based tasks. Each round takes just 15 minutes or so.

At the start of every mission, a certain number of task cards will be dealt with depending on how difficult the mission is. The number of these cards varies based on their individual difficulty. So, there could be three easy and one medium difficulty task to complete or two very hard ones.

All players in the game are then dealt the entire deck of cards as evenly as possible. Like all games of this type, there are four suits of cards numbered 1 through 9. This game also includes four submarine cards which are valued between one and four. The player holding the 4-value submarine card is the captain for the mission.

Once the cards have been dealt, players will decide which person will take each task card that was dealt out at the start of the turn. Players can look at their own hand of cards to determine their ability to complete the tasks, but they may not communicate any of this information to one another. All the players know is which person has the highest value submarine card to start.

There are a ton of task cards that the players can encounter on their missions but in effect, they all involve forcing certain players to either win one or more of a type of trick or not win them. The goal of the crew (“crew” as in both the game and the actual group of players) is to ensure that each person with a task card completes whatever objective they have before the end of that particular mission.

The captain starts the round and plays a card from their hand to open the trick. The color of this card will dictate what color must be played for the round. The highest card of that color will win that trick unless a submarine card is played. Submarine cards are the game’s trump cards, which—according to Dylan—are apparently a staple of trick-taking games. Players must play a card matching the color of the card that opened the trick if they have one although they are not forced to play either higher or lower cards.

Since players cannot communicate information about their hands (thematically this is because of equipment difficulties on the crew as they dive into the ocean) they do each have one token that they can use every round to reveal a small amount of information about their hand. The token allows them to inform their teammates that a certain card played in front of them is their highest of a color, their lowest of a color, or the only card they have in that color. This is all done just by the placement of the token. Players also have access to a submarine token that acts as a distress signal of sorts and has players passing a single card to their neighbors to give a little bit of additional information.

If all of the task cards are completed successfully during or at the end of the round, then the players win. The entire team loses if for any reason a single task card is failed. (Say if Jason accidentally plays a card that makes him win the pink 4 even though he wasn’t allowed to win the pink 4. Thanks, Jason). The later missions also introduce additional concepts so opening trick restrictions and time limits, but for the most part that’s how the game is played.

Since I hadn’t yet officially joined Board Game Quest’s secret trick-tacking society, I only had a vague notion of what to expect from The Crew: Mission Deep Sea. The first thing that I guess should have been obvious to me is just how simple it is to sit down and play a hand. Deal some cards, match some colors, highest one wins. I can’t really explain why, but for some reason I expected things to be more complicated than that.

Obviously, the cooperative aspect of the game is where the challenge comes in. Not only in the way the teams can’t fully communicate but also in the subtle way players must choose which task they will attempt to complete at the beginning of the hand. All the information is important to one’s teammates and everyone is constantly weighing the best way to use all of it. (“I know Dylan refused to take the task about winning every 9-value card, but does that mean he has none of the 9s or that they’re his only cards of that color and that he can lose them easily with a different opening color? And why does Jason keep giving me dirty looks?”)

Since the early missions go by in basically five minutes, the game can feel like a whirlwind even in victory. But as you go deeper into the mission logbook, the challenges become more and more involved without necessarily ramping up the difficulty of the ruleset. (I should explain as well that the game isn’t a campaign, and you can start by diving right into the deeper end of the logbook if you prefer. This is what Andrew insisted we do even though I kept explaining how bad I was at trick-taking games. When I finally told him I’d give it a try he snapped, “Do or do not. There is no try.” He quoted Yoda that time. Nice.)

Like all games with limited information, there is a great sense of frustration when a teammate makes a decision that is so obviously the wrong one. There’s also the utter disappointment when you are the one who makes that blunder. And then there are the times when it’s unclear who exactly is to blame for the loss and it’s simply the mission’s difficulty that gets the better of the team (er, the crew).

I also tried the two-player variant and while I’m not sure I’d pull out a game like this regularly for just two, the system really does a good job of making it feel like it’s a three-player game. Basically, there’s a row of cards that the captain can choose to play for each trick. It gives additional information but only one player is allowed to choose from it during each mission. It’s an interesting variant that works better than it has any right to.

I kind of figured I was going to like The Crew: Mission Deep Sea even though I didn’t know much about the style of games, and it didn’t disappoint. After only skimming the rulebook briefly, I was able to sit down and understand everything about the game mechanically, which is important for a game that wants to play quickly while still having five-player capability. I was even able to teach it to my father because he grew up playing card games and internalized the rules almost immediately. (For scale: it took me about three hours to teach and play a game of Wingspan with him.)

Even if you skip the “story” contained in the logbook entries, the sheer fun of playing The Crew: Mission Deep Sea will pull the group immediately into another game after you finish the first one. And who knows… playing might even grant you access to an entire subculture within your office. A larger world, as it were.

Final Score: 4.5 Stars – An easy to play and addicting cooperative card game that will be a hit with gamers of all kinds.